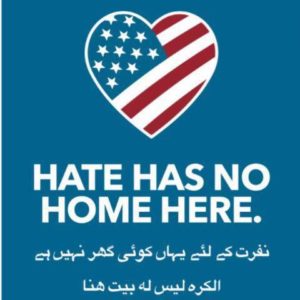 An open community vigil will be held tonight in Rock Rimmon Park on Manchester’s West Side in response to the discovery a banner proclaiming “Diveristy is code word for hash tag White Genocide.”  Organizers, including our very own Ins and Outs of Immigration segment anchor Eva Castillo-Turgeon, whom we interviewed about the issue yesterday, say it’s important for the community to come together in a show of unity against such messages.

The park was chosen so as to not hold up traffic around Parkside, with organizers posting they believed the park was close enough to the school to be supportive of it.  The event is described as “organic and loosely affiliated” with organizers encouraging people to invite their family and friends.  There will be speakers and signs on site, but organizers say people are welcome to bring their own signs “encouraging peace, love and coming together.”  Oh, and any refreshments-coffee-donuts, etc…will not be turned down, they say!

The event starts at four today and was originally scheduled to end at six, though it may be curtailed due to weather.  Citizens in the North End near Webster School and on the West Side along the Piscataquog Rail Trail have reported seeing and removing identical banners while walking in the areas.  They reported them to authorities after the one found on the fence at Parkside was made public.

The Manchester Board of School Committee met last night and spent a whole lot of time on a handful of issues.  Among them was debating the merits of asking legislators to support House Bill 1 5 5, which increases state funding to include full day kindergarten.  As it stands, the state Adequacy Aid formula only funds half day kindergarten, so if your community has full day kindergarten, only half of the enrolled students are funded in state adequacy grant.

At-Large Committee Member Rich Girard opposed the motion saying the board should reserve its political capital to petition the state on matters the district does not control, such as having to absorb the costs that come with the state eliminating retirement and CHINS funding, reducing Adequacy Aid, Catastrophic Aid and the Stabilization Grant and having to pay for special education in charter schools and transportation of city students to the Career and Technical Education classes at the School of Technology while the towns that send their kids to the School of Technology get reimbursed by the state.  Girard said asking the state to cough up the dough to pay for a decision the district made was counterproductive to the city’s aim of increasing state funding as it undermined the district’s credibility on funding matters.

Led by Mayor Ted Gatsas, the board disagreed saying the city should support any and all legislation that would bring in additional state dollars while asserting that Kindergarten was necessary for city students whose home life wasn’t preparing them to start school.

The board did vote unanimously to support House Bill 3 3 9 which would provide the city with the same aforementioned transportation reimbursement the state pays the towns to transport their kids to Career and Technical Education classes.

The board also unanimously voted to support House Bill 5 2 5 which would remove the annual four percent decrease in school stabilization aid.

Yet another discussion was had about the position of athletic director.  Superintendent Dr. Bolgen Vargas announced last week he posted the position as a part-time one given the district’s budget constraints.

That information came in a discussion started by Girard about the job description that was returned to the board by the Committee on Athletics unchanged after the board sent it back to the committee for changes.  Vargas had asked board members for feedback on the position, which Girard said the committee totally ignored to determine it was fine the way it was.  Girard said he’d shared the position write up with a dozen coaches, athletic directors and athletic equipment suppliers, all of whom had a very different understanding of what the district wanted than was allegedly intended by Assistant Superintendent David Ryan, who authored the description.  In the end, the board amended the description to say “part time” and authorized Vargas to write a description for the part time position and bring it back to the full board for approval.

The big news, though, was the discussion on the budget.  A motion made by Girard to authorize Vargas to do whatever was necessary to operate the district based on a level funded budget was defeated by ten to five with Gatsas, Deb Langton of Ward Two, Freeman and Ross Terrio of Ward Seven supporting Girard and the motion.

Beaudry: Be careful what you ask for…

A motion made, by Vice Chair Arthur Beaudry of Ward Nine, to ask the Board of Mayor and Aldermen to appropriate the district’s budget by March 31st so it could take whatever steps were necessary to live within the budget passed was adopted with Girard, Terrio and Leslie Want of Ward Four opposed.  Mayor Gatsas abstained.  Girard, citing his budget experience as an assistant to Mayor Raymond J. Wieczorek and as an Alderman at-Large, opposed the move saying the district would likely be short sheeted on funding as the aldermen would be unlikely to provide an increase in funding without knowing whether or not non-tax revenues would support increased funding.