While the numbers aren’t final and can’t be for another day or so, it would appear as if the opioid epidemic continues to improve, at least in the city of Manchester.  Statistics released by the Manchester Fire Department’s Emergency Medical Services Officer Christopher Hickey show that the number of suspected overdoses in February is down by almost half versus last February.  In a message sent to media outlets on Friday, Hickey wrote that, quote:

Each and every day we are giving someone a shot at sobriety or reconnecting a broken family.

That attitude, along with his continued congratulations for those he says are doing the work to help folks, just might be why Hickey will be in Washington, D C this week to receive the two thousand seventeen National Pillar of Excellence Award for Treatment from the Addiction Policy Forum.  It’s one of six national awards created by the recently enacted CARA legislation.  Hickey credits those he says have made Safe Station a success by the work they do each day with his receiving the award.  Hickey will also attend CARA grant workshops at the request of the Addiction Policy Forum, which is apparently making money available to study Safe Station and determine why it’s working so well.

Our congrats and thanks to Chris and to all those who are engaged in this epic battle each and every day.  Once again, Manchester has risen to the challenge and responded admirably to a threat against its well being.

The town of Hooksett has announced that sample ballots for the coming town and school district elections are available as are applications for absentee ballots.  We’ve got the links.  (Click here for the Hooksett Voters Guide.)  We’re pretty sure that means other towns whose elections are queued up for March have the same materials ready to go.  Check your town or school district Web sites.  By the way, in taking a look at Hooksett’s ballots, one has to wonder whether or not they’ve found the leprechaun’s pot of gold at the end of the rainbow.  Taxpayers just might want to show up and weigh in on the warrants.

Boyd: Once more unto the breach

Merrimack Town Councilor Bill Boyd announced he will be a candidate for reelection.  He filed his papers late last week to seek a third term.

Also announcing he will be a candidate this election was Dana Buckley of Candia.  He’s put his name on the ballot for school board.  Buckley obtained well over one hundred signatures on a Citizen’s Petition Warrant Article to overturn the Candia School Board’s adoption of a policy that not only allows transgendered children to use whatever bathroom or locker room they want and play on sports teams of their chosen gender rather than their biological one, but also prevents school officials from telling parents that their children were behaving as if they were members of the opposite sex. 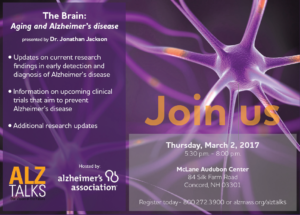 Alzheimer’s Disease is the only one among the top ten causes of death that cannot be prevented, cured or even slowed.  To continue their educational efforts, the Massachusetts, New Hampshire Chapter of the Alzheimer’s Association is inviting the public to attend its second annual AlzTalks program this Thursday, March 2nd at the McLane Audubon Center, in Concord.  The event starts at five thirty and will feature Jonathan Jackson, Ph.D, a cognitive neuro-scientist who investigates the behavioral, genetic, neurological, physiological and cognitive changes of people who age normally versus those with Alzheimer’s.   Dr. Jackson will focus on current research findings in early detection and diagnosis.  The organization says a growing number of studies indicate that Alzheimer’s begins long before clinical symptoms appear, so this is a must attend event for anyone who is concerned about Alzheimer’s or dementia.

The AlzTalks program is free and open to the public.  Registration is encouraged and we’ve published the relevant Web links and phone numbers for your convenience.  To register for call 800.272.3900 or visit alzmass.org/AlzTalks.

Eversource has announced it will spend forty one million dollars to prune trees that threaten power lines.  Working closely with community leaders and tree wardens throughout the state, Eversource will cut back trees along more than twenty seven hundred miles of overhead lines.  With the lasting effects of the recent drought continuing to plague the region, identifying and removing hazardous drought-stressed trees remains a top priority.

To be trimmed…hopefully better than this.

In their announcement, Eversource reminded customers that they are responsible for tree maintenance on their own property, including keeping branches away from the wires connecting their homes and businesses to the main utility lines on the street.  The company strongly recommends that property owners contact a professional tree service to perform any needed work.  We’ve published the link they provided for those interested in the details of the company’s comprehensive vegetation management program.  Eversource.com.