The New Hampshire House of Representatives may have made history yesterday when it failed to vote in favor of a budget.  Things got dicey as a caucus of conservative members intent on shrinking the size and scope of government, known as the N H House Freedom Caucus, joined with Democrats who wanted to spend more money, to successfully oppose H B 1 and H B 2.  Democrats complained the budget produced by the House Finance Committee didn’t spend enough to fight drug addiction or fund full day Kindergarten.  The Freedom Caucus wanted to cut two hundred million dollars from the twelve billion dollar budget, arguing a more than ten percent increase in spending wasn’t justified.

Jasper: Bit by his own tactics

In a press conference following the debacle, House Speaker Shawn Jasper, Republican from Hudson, criticized the Democrats for insisting that Full Day K funding be in the budget after an agreement was made with the governor and the senate to address that matter in a separate bill.  He also faulted the three dozen members of the Freedom Caucus for not identifying where their two hundred million in desired cuts would come from.  (B T W, Jasper ought to think twice about criticizing a block of Republicans for joining with Democrats to thwart the will of the rest of the G O P majority, since he’d not be speaker today if a block of Republicans hadn’t joined with Democrats to thwart the will of a majority of Republicans who didn’t want him as speaker, but I digress.)

Morse: Senate will get it done.

Senate President Chuck Morse, Republican from Salem, issued a statement after the House placed its spending bills in the table.  He commended the House Finance Committee for its hard work and said that, starting Monday, the Senate will commence its quote “rigorous budget process,” as it does every two years.  The House’s failure to pass a budget means the budget proposed by Governor Chris Sununu moves on to the Senate.

Morse said the Senate looked forward to working with the House and the governor to produce a budget that will work for the state.

We look forward to their very valuable input on the budget that will be useful in helping to develop the budget in the Senate.

He said the committee believed the governor’s budget was, quote:

a strong foundation from which to start and we look forward to working with both the House and Governor as the Senate’s budget phase begins the regular process.

Following what happened in the House, Sununu issued a statement saying he was disappointed that House leadership couldn’t get a budget passed, but said he was encouraged by the Senate’s swift action to take up his budget as a starting point for its deliberations. 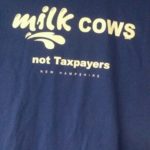 In other news from the General Court, the House and Senate agreed to changes on a bill that milks taxpayers for cows.  Senate Bill Ten will dole out two million bucks to dairy farmers affected by last year’s drought.

Not absolved of liability

The Senate also approved a floor amendment to H B 329, which would require voters to certify election results in the seventy three towns that broke the law by changing their election dates on advice from the New Hampshire Municipal Association.  Elections asking voters to certify their town’s results would be held in May if the bill passes.  Town bond counsels have balked at issuing bonds in the towns that violated the law, fearing legal challenges that might invalidate the balloting.  The bill contains language refusing to absolve the towns, the Municipal Association or any other legal counsel for advising moderators to act, in the absence of any legal authority, to change statutorily established election dates and procedures.  The amendment would certify the election of board members and give them the opportunity to certify all other votes cast, subject to a public hearing.  (NOTE:  This story was updated following the release of the amendment approved by the senate.)

In case you missed it, President Donald Trump ordered naval forces to unleash a barrage of Cruise Missiles on Syria last night.  The Syrian air base from which the plane that allegedly perpetrated a chemical attack is believed to have been launched, was utterly destroyed by the almost sixty missiles that were launched.  The attack comes just a day or so after Trump condemned the attack blamed for killing about seven dozen men, women and children.  Hearkening back to the former occupant of the White House’s failure to respond after Syria supposedly crossed his self described “Red Line” involving the use of chemical weapons, Trump said the attack crossed not just that Red Line, but also crossed “many, many lines.”  Though Russian officials were warned in advanced of the attack, they had personnel stationed on the base, they condemned it as an “act of aggression” and called for an emergency meeting of the U N Security Council.