To sum up the big storm that hit Sunday into Monday, causing the fourth largest electricity outage in state history with an estimated two hundred ninety thousand utility customers losing power, we’ve decided to share the press release put out by the Derry Fire Department.

Heavy rain and strong damaging winds have closed roads and knocked out power to many. Eversource reports 32% of Derry residents are still affected by power outages. Early this morning, 57% of our community was without power. Utility and public works crews have worked throughout the day to clear debris and wires from roadways. As of 2:30 p.m. there are 26 roads that are fully closed and 13 that are partially closed. Emergency responders have been extremely busy handling 215 calls for service…The fire department is urging citizens to stay clear of downed wires as they may still be energized. When operating generators make sure they are not being run indoors and are at least 10 feet from the structure. Generators running inside a structure can cause carbon monoxide poisoning and result in death…The Zoo Fitness Club and Planet Fitness are allowing residents to shower at their facilities during the power outages.

Eversource’s last press statement on the damage came yesterday at about one o’clock.  It said hundreds of line and tree workers were clearing extensive damage to the state’s energy system which suffered widespread power outages.  As of midday yesterday, about one hundred sixty five thousand customers remained without power.  The utility said powerful winds throughout the night brought trees and tree limbs down onto power lines, resulting in more than 36 broken poles and downed wires throughout the state.

Despite having restored power to more than one hundred thousand customers, Vice President of Electric Operations Joe Purington said, quote:

“this will be a multi-day restoration effort, and we encourage everyone to take steps to prepare.” 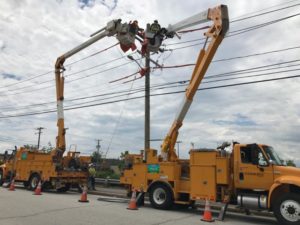 He also said Eversource had requested hundreds of additional line and tree crews to assist.  Quote:

“It will take time to assess and repair damage caused by this storm, and our crews will continue to work as quickly as is safely possible to restore power to our customers.”

Strong winds continued throughout the day, yesterday, downing more trees, branches and power lines and causing more accidents and road closures.  Eversource said its crews and contractors will work around the clock until all customers have power restored and asked customers to report  power outages online at Eversource dot com or by calling 8 0 0-6 6 2-7 7 6 4.  They are also urging people to stay away from downed lines, especially those covered by tree debris.  Always expect the wires are live.

In Merrimack, the police department announced the postponement of Trick or Treat until tomorrow night from six to eight due to all the downed trees and wires.

“I’m for Joyce Craig because she will advocate for modern, timely, and accurate reproductive and sexual health in Manchester schools.”

That’s what Sheila in Manchester had to say in social media posts published by Planned Parenthood Action Fund last week.  Craig has taken gobs of cash from abortion supporters and was even the beneficiary of an endorsement from one of the Manchester area’s leading abortionists, Dr. Wayne Goldner, a Bedford resident who penned a letter to the Union Leader on her behalf.  It is not uncommon to see “I Stand with Planned Parenthood” signs on front lawns with Joyce Craig’s mayoral campaign signs.  Aside from the usual diatribe, Craig has published no specific plans for schools, let alone for “modern, timely, and accurate reproductive and sexual health” classes, which makes us wonder whether or not Planned Parenthood has made this up to fire up its voters or this is another example of what Joyce Craig means when she says she’ll be transparent. 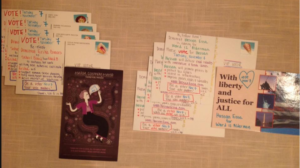 Cards from non-neighbors for Connors and Essa 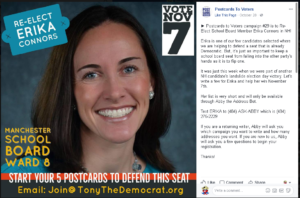 Getting help from neighbors…in Georgia

Essa: Neighbors from all over

Also on the campaign front, Ward Eight School Board Member Erika Connors and Ward Twelve aldermanic candidate Hassan Essa are getting help from an unusual place:  Kennesaw, Georgia.  Post Cards to Voters is rallying their troops to handwrite postcards to Manchester voters on their behalf, to make it look like their local neighbors are urging them to vote for these rising Democratic stars in the coming election.  It is unclear whether or not Connors and Essa are paying for this service or whether or not Tony the Democrat, who runs the operation, has picked their name out of a hat.  One person who commented on the matter on social media asked why Connors was outsourcing local support. 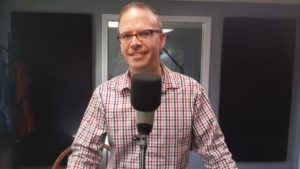 For the local economy?

Meanwhile, a review of campaign finance reports shows that Ward Two aldermanic candidate Will Stewart, who has made a point of emphasizing  his economic development experience in the campaign, has spent virtually no money locally on anything locally which makes one wonder just how he’d propose to develop the local economy when he’s spending money in Iowa, Florida, South Carolina, Australia and Israel instead of in the city he’s running in.