Let’s start here:  If this link leads to nothing, you know I was censored and probably placed in Facebook Jail.  If not, you can read it in its original, though I’ve added a screen shot and a disallowed link or two below.  Also, here is the link to the article I found in the Union Leader that prompted the post.  ~Publius

I’m probably going to end up in Facebook Jail (again), but this is not enough of a penalty.  The privacy issues in this article notwithstanding, Facebook is certainly not an equal opportunity platform that allows for all political points of view.  It is a publisher that decides what content is acceptable or not.  The record on this is abundantly clear.  As such, the protection it enjoys as a platform needs to be removed by Congress so it can live and die by the laws governing publishers. 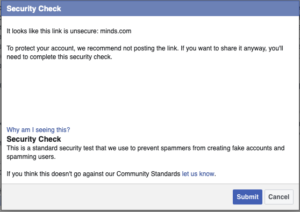 Minds.com: Evidently something to protect against! Click to enlarge.

It’s also time for conservative voices to stop whining about it and marshal their support behind new, emerging social media platforms like MINDS DOT COM.  (NB: In trying to publish this post, Facebook disallowed the link to the Minds Web site claiming it was unsecured link that may lead to spam, so I had to write it out just like I would do in an On Air News Read (remember those? :D))  A mass exodus of people from Facebook to new social media outlets that it doesn’t not control, that are also not controlled by the likes of Google, is the proper market response for conservatives and Classical Liberals who embrace opportunities for dialogue rather than censor opposing views.

Over the years, Girard at-Large as published, welcomed and engaged differing points of view and constructively conversed with the people who hold them so you, the members of our Large and Loyal Audience, can ask your questions, offer you input, have your say and make up your own minds; minds we believe you have and can use on your own to form your own conclusions.  We do not fear this.  We want it, unlike those who would indoctrinate you to their point of view by controlling the information you have access to.  We believe in the American Way, not that of Karl Marx.

Finally, if conservatives don’t believe that the alternative social media outlets are sufficient to their needs and that Facebook, Google, Twitter and all the outlets they’ve bought up to prevent competition to their offerings, then they should use the vast resources at their disposal to provide to the marketplace that which they believe needs to exist.  That is also the American Way.  Complaining about the unfairness of it all, while accurate and justified, isn’t going to change anything, except the attitude of conservatives who may start to believe they’re “entitled” to a fair hearing on these social media platforms.  True, under the law, we are.  True, the law is not being enforced.  Also true, we are not, in the foreseeable future, going to see that changed.

The answer?  Meet the demands of the marketplace with an alternative and watch the magic of competition work!

(I’m going to screen shot this right after publication and post it to www.girardatlarge.com so that the few of you who are likely to see it before it disappears can share it with your friends (yeah, you’ll probably end up in Facebook jail, too.  So what?) and send the link to your friends via a medium that they cannot control, at least not yet, and that is email!)

As always, I am proud to have you in our audience and thank you most sincerely for your continued participation and support. 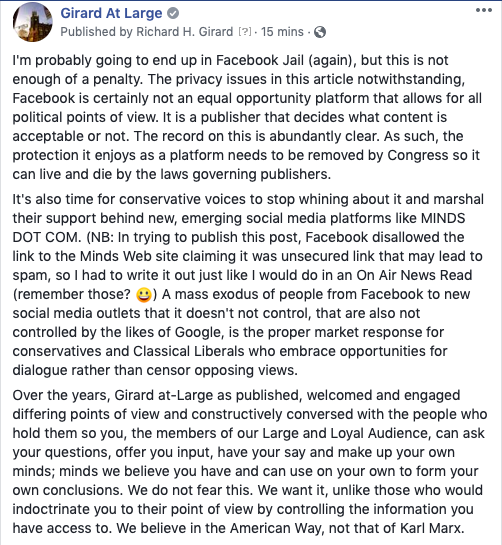 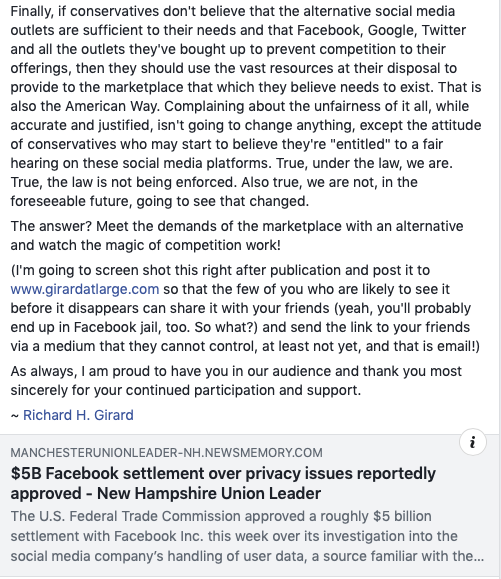