Girard at Large has learned that an unplanned ribbon cutting featuring Mayor Joyce Craig at the soon to open Rex Theatre may have been done to meet a deadline for a political mail piece from her reelection campaign.  Craig was the only political figure in attendance at the event, which included a very small, select group of people affiliated with the project and the city’s mainstream media outlets, which provided generous media coverage of the event they reported as a ribbon cutting. 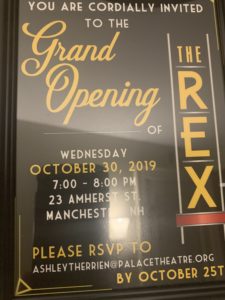 The original and still scheduled event

The original, and still to be had, ribbon cutting was scheduled for October 30, 2019.  Girard at-Large has learned that the Board of Mayor and Aldermen, which has been invited to the event on the 30th, wasn’t invited to the event held on Thursday, October 17th.  Several aldermen have privately and angrily complained that they knew nothing about it until they saw social and regular media posts about it.  Moreover, those familiar with event said it was nothing more than a “photo op, ” with one one person telling Girard at-Large:

Nobody made any remarks and there wasn’t any sort of program.  They didn’t even have any refreshments.  They gathered people together for a photo and that was pretty much it.

Girard at-Large’s review of the subsequent media coverage on WMUR-TV and the Union Leader confirms the accuracy of our sources.  There is no footage of anything but the ribbon being cut.  News stories include interviews of some who were present, but no footage, photos or quotes from any speech or program presentation. 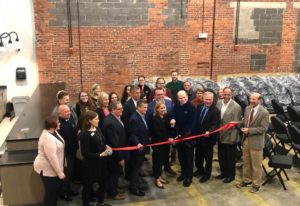 Made for camera event

Our sources stated that not only was this done for Craig’s campaign to meet a production deadline for a campaign mailer, but that the “cover story” for it being done was that the event was being held “for the staff.”

Girard at-Large emailed questions to Mayor Craig and Palace Theatre President & CEO Peter Ramsey about the event, its nature, purpose and origins.  The Palace is the Rex’s owner and operator.  Ramsay replied on the phone for both himself and the mayor, saying she had asked him to contact us on her behalf.  When queried about that, Ramsay said she wanted him “to make clear that she had nothing to do with the event.  It was all me,”  he said. 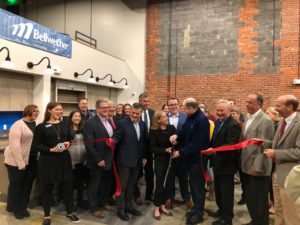 He went on to claim that he arranged the event and invited her to be present since “the renovation of the Rex was her idea.”  (Publisher’s note:  The renovation of the Rex was first proposed by Mayor Ted Gatsas in mid 2015.  There were several twists and turns over the ensuing three years as the project took various forms before the current proposal succeeded.  Ramsey said he didn’t know anything about Mayor Gatsas’ efforts because he wasn’t involved.  Click here for the many Girard at-Large stories and interviews about renovating the Rex.)

At first, Ramsey said, as our sources told us, that he organized the event “for the staff.”  Which staff?  The Palace/Rex staff.

If it was for the staff, why bill it as the official ribbon cutting and invite the press?

You know how it is.  We need constant visibility in the media.  My press guy did that. 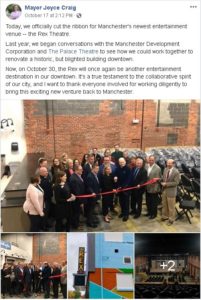 So, your media guy invited the press to a staff event?  Yes.

Why not invite the Board of Mayor and Aldermen?

They’re invited to the ribbon cutting on the thirtieth.

Ramsey also said he organized the event because he was having a “hard time” getting the city’s inspectors to sign off on the permits they needed to open and he was concerned that they wouldn’t receive them in time for the opening acts to be promoted.

If you’re having that much trouble with the inspectors, why not call the mayor and see if she can help out?

That’s not the way I do business.

Ramsey basically told Girard at-Large that he thought hosting a ribbon cutting would impress upon the inspectors the need to wrap things up so they could open.  Apparently, the scheduled event, with the city’s political, business, cultural and other leaders, wasn’t enough of a message.

Girard at Large has since learned that Ramsey sang a different tune at a meeting of the Manchester Development Corporation’s Board of Directors a week before the ribbon cutting.  According to our sources, he praised the city’s departments on the amazing job they did and mentioned how easy the inspection process was.  Ramsey did say it wasn’t perfect, but gave no indication of the kind of hassle he chronicled for Girard at-Large. 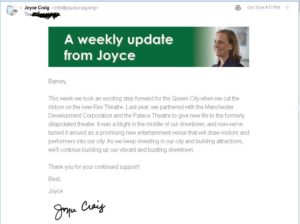 When asked, Ramsey said he didn’t know how or if Craig was going to use the photos in her campaign in response to our questions.

Girard at-Large followed up with Mayor Craig to find out whether or not she was going to use any photos or media coverage of the event in her campaign.  A response came from her campaign manager McKenzie St. Germain:

I’m writing to let you know that no photos from the Rex ribbon cutting yesterday are being used in Mayor Craig’s campaign materials. 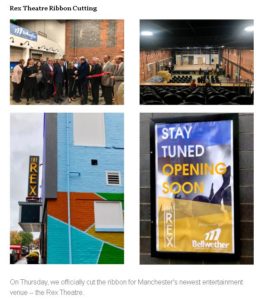 Campaign email’s second story starts with Pictures from the event.  Click to enlarge

St. Germain didn’t reply to our follow up question asking, if that was the case, why were the pictures published on the Facebook page the mayor uses to promote her campaign on the day of the ribbon cutting and highlighted in the campaign newsletter the following day.  Both campaign postings referred to the “official” Rex ribbon cutting.

In another email, Craig’s campaign hails the coming of its first TV ad of the election season.  In the ad, there’s a shot of Craig and Ramsey inside the Rex.  While our sources tell us the footage was shot about three to four weeks ago, we raise it here because it calls into question the level of detachment Craig and her campaign have from Ramsey.  We note that other sources have questioned whether or not the Palace’s involvement in this special ribbon cutting featuring Craig and used in her reelection campaign constitutes political activity that violates the Palace’s non-profit status.
The original “official” ribbon cutting and grand opening is still scheduled for October 30, 2019.  At it, will be all of those who played roles big and small in renovating this structure alongside their family and friends and interested members of the public.  It’s not likely the media outlets that went to the first ribbon cutting will spare precious reporter resources, airtime and page space to cover the second one.  Why would they go the second time?  To see all the people who weren’t invited the first time?  Maybe, but it’s still the same story:  Ribbon cut.  Rex open.

Normally, we don’t share our opinions in news articles, however time is short and demands are many.  It very well may be that this was all Ramsey’s idea.  But, if it was, why the multiple stories about for the staff and because of the inspectors?
Was it “for the staff?”  If it was, then why was the media invited?  Why did Mayor Craig put out campaign pieces announcing the “official” Rex ribbon cutting?  Why weren’t more who were directly affiliated with the Palace present?  If it was “for the staff?”
Right!  It’s because they were already invited to the official event.  Then again, so was all of the staff that was present for the non-official official event.
The claim that it was done because of the inspectors is as troubling as it is bizarre.  Honestly, I don’t know what to make of it, though it appears to have worked.  According to Ramsey, he got the sign-offs he needed the next day.  Still, it seems a bridge to far to believe he organized a ribbon cutting for the staff to pressure the inspectors to sign off on the permits. 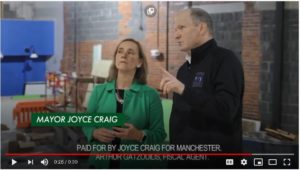 Craig campaign TV ad:  From the Rex with Ramsey.  Click to enlarge

Regardless of whether or not Mayor Craig had anything to do with organizing it, it seems a stretch to believe she was just a non-participatory guest.  Even if true, she should have known better.  Someone who brags, as she does, about collaborating with everyone to make things better, should have known the hurt, anger and disappointment it would likely cause in those who might feel like their moment, the recognition of all their hard work, was stepped on so she could make a PR splash sooner than later.  Someone truly interested in others would have said something like:  “Peter, thanks for the invitation.  I’m flattered!  However, I don’t think it’s right to do this outside of the official event where everyone who has planned to be, and is looking forward to being there will be present.  It can wait.”

Then there’s the Craig campaign’s assertion that nothing from the ribbon cutting will be used by the campaign.  We know that’s just not true.  Couple that with the footage shot with Ramsey in the Rex for her campaign commercial and one has to wonder who really planned what and when they planned it.
Then, finally, we have to ask what’s the point of having the official grand opening after the grand opening that’s already received the attention one would expect?  Is it to thank and recognize the “other people” involved?  Are they less important than those at the special event?  Were the ones at the special event somehow privileged or more important than everybody else?  Obviously, they’d say “no” but one cannot rule out that this was done for the recognition of most important one of all:  Joyce Craig.