Volunteers shall not arrange to meet students outside school activities or off school grounds and shall not give gifts to students.

That sentence from page 4 of the Manchester School District’s Volunteer Handbook is at the heart of the controversy surrounding Alderman Bill Barry (D-Ward 10).  Barry, a volunteer assistant football coach at West High School, was called out for using West High football players to distribute campaign literature for his reelection campaign on Saturday, October 19, 2019.

I learned about this after receiving some rather animated constituent phone calls.  Not knowing what was going on, I went to Barry’s Facebook page.  I saw the offending post and took a screen shot.  Barry had shared a post about the event from Coach Tom Bozoian, the team’s head coach.  I went back to the pages more than once to check in to see who was “liking” the posts and noticed that Manchester Education Association President Sue Hannan had liked Barry’s post and Manchester School Athletic Director Christine Pariseau Telge had liked Bozoian’s post.

Knowing the polices as I do, I sent the screen shots to Superintendent Dr. John Goldhardt to alert him that they were being violated.  Specifically, being new, I sent him Community 102 Public Information Dissemination, which reads as follows:

Under no circumstances shall students be used for the purpose of distributing any materials that could be considered political or of special interest, including school budget information. 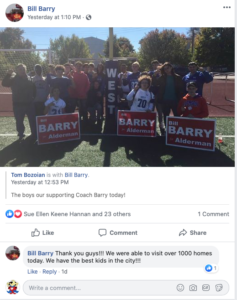 The superintendent decided an investigation needed to be launched.  At the Board of School Committee meeting on October 28, 2019, he said the matter was still being investigated and that’s all that Mayor Joyce Craig would allow.  Despite my efforts to raise the clear violations of the Volunteer Handbook and district policy, she claimed it was a “personnel matter” that could not be discussed in public session.  She also said the aldermen were going to take up the matter because of a charter violation complaint filed by Ward 10 resident Tammy Simmons.

Alderman Barry violated our policies and rules, I said.  This matter rightly belongs to us for action.  Not according to the conniving Mayor Craig, who insisted that the aldermen were going to take it up, which made no sense.  He’s either an alderman or a coach, except when she wants him to be both so he can escape from the other.  Anybody who watched the meeting knows she talked over me, refused to allow me to talk and allowed others to speak to shut me down.  We took it into non-public session. 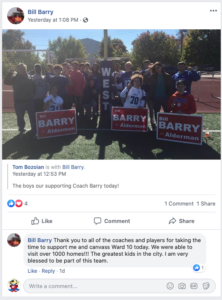 Every time I referred to Barry as “Alderman Barry” she would interrupt and say “Coach Barry.”  It happened several times in non-public and was done to maintain the charade that he was entitled to protection because the discussion might harm his reputation.  This is something the law provides to government EMPLOYEES but specifically prohibits for elected officials.  Moreover, Barry’s NOT an employee.  He’s an unpaid volunteer.  If he is an employee, then there is a disturbing precedent that’s been set.  If volunteers are employees, then where do the district’s liabilities and obligations end?

I was content to move on believing my point had been made in the public session, but then I saw the meeting of the Board of Mayor and Aldermen the very next day.  During that meeting, Alderman Keith Hirschmann (R-Ward 12) basically sang Barry’s praises, calling him an honorable man during the discussion on the charter violation complaint.  All he asked Barry to do was say he would never do something like that again.  Barry refused, saying he couldn’t guarantee it wouldn’t happen again. 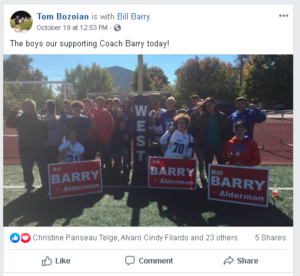 We know that Barry was given a copy of the Volunteer Handbook.  What we can deduce from that is he either didn’t read it and therefore didn’t know what he did was wrong or he knew and did it anyway.  If it’s the former, it would have been very easy for him to claim ignorance and apologize.  He didn’t.  When questioned by Alderman Elizabeth Moreau (R-Ward 6), he simply stated he wasn’t going to discuss it any further, whining that he couldn’t believe it had “come this far.”  The complaint was received and filed after Mayor Craig told Alderman Joe Kelly Levasseur (R-at-Large) that it was “being investigated” by the school district.  Only Levasseur, Hirschmann and Moreau voted against sweeping it under the rug.

Barry then posted this bizarre diatribe on Facebook complaining that myself and School Committee Member John Avard (R-Ward 10) of causing district administrators to interview students to ensure they volunteered to help his campaign, which begs the question of who asked them to help.  Then he prattled on about how we, Avard and I, were trying to deprive students of their First Amendment rights, which he said the kids were exercising. 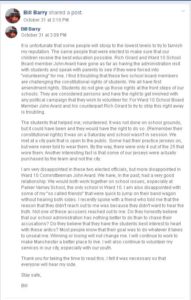 Frankly, the interviewing of students was raised in non-public and I stated my opposition to it.  I didn’t, and still don’t, see the point.  It’s not the kids who violated the policy, it’s the adults who organized the political campaign event and asked them to participate.  What I want to see from the investigation is:

This last question is of particular interest as I have received information from two people on Rockland Avenue who say Bill Barry’s fliers were left on the ground by the sign they had on their lawn for Barry’s opponent.  You’ll see in the posted picture that one of the kids picked up the sign and drove it through a Barry flier he dropped on the ground.

Having heard from a furious parent, the lit drop was organized, so we need to know by whom.  That is what the investigation should be about.  The parent had been asked permission for the campaign event and the subsequent pizza party.  Angrily, she asked what lesson Barry’s conduct at the Board of Mayor and Aldermen meeting was teaching “these young me.”  She expressed “dismay.” Barry’s bellyaching about others “stooping to the lowest levels” to “tarnish” his reputation is a real knee slapper.  It’s as if he’s saying we made him violate policies and rules so we could harm his reelection  chances.  It’s not HIS fault!  The kids wanted to!  They have the right to help me if they want.  The parent’s agreed!  It’s patently absurd.  The policies, which I also mentioned in non-public, don’t have an exemption for those who “volunteer,” “want to” or have “parental permission.”  Agree with them or not, they are what they are and his failure to recognize that and his total lack of contrition is as galling as it is arrogant.

There have been other instances of Barry’s “do what I want” rule breaking.  You might remember the whole HOPE NH fiasco he was integrally involved in.  What was particularly odious about that whole thing was how Mayor Craig let Barry and Alderman Dan O’Neil (D-at-Large) falsely attack board Vice-Chair Arthur Beaudry (D-Ward 9) and opponents of the program for Craig’s insistence that the discussion over HOPE be held in non-public session.  Conniving Craig let Barry and O’Neil scandalize the school board even though she disallowed public discussion and had to be forced to release the minutes.  This is yet another instance of the application of “personnel protections” to non-school personnel to protect the reputation of the elected Bill Barry. Ray Hebert: A vote for him holds Barry accountable

There are two conclusions one can draw from Bill Barry’s bad behavior.  One is that he’s just an unlucky sop who innocently wanders into the wrong place at the wrong time and doesn’t have the humility to admit he erred and apologize.  The other is that these incidents are the tip of the iceberg and point to a pattern of behavior that shows he believes he can do whatever he wants and is above being held accountable.  Craig has protected him from his flagrant and improper involvement with schools twice.  The Board of Aldermen has let him, as it’s let many of its members, off the hook.  Perhaps the voters of Ward 10 will let him, Mayor Craig and every elected official in the city know that there are limits and that elected officials are expected to follow the rules, policies and laws of the city.