New Hampshire Attorney General Gordon MacDonald and Secretary of State Bill Gardner issued a statement yesterday saying that archived copies of the state’s voter database won’t be turned over to the Presidential Advisory Commission on Election Integrity or available to the public until further notice.  While scanning copies of the documents in order to provide them to the commission, workers discovered hand written notes on some checklists that divulged non-public information on domestic violence victims allowed to vote by absentee ballot because of protective orders but marked on the checklist as having voted in person. 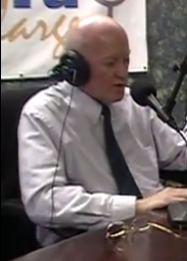 Gardner and MacDonald said that while the informal markings were well intended, they were improper.  As a result, state workers will have to remove the information from the archived checklists.  Once removed, they will be scanned and sent to the commission and made available to the public.  Gardner said his office, quote

“will continue to provide guidance to local election officials to ensure that non-public information is not included on publicly available checklists.”

The A G, the Sec of State and Governor Christopher Sununu agreed to provide scans of publicly available voter information, including name, address, party affiliation and voting history to the commission several weeks ago.

Attorney General MacDonald also issued a statement yesterday regarding charitable relief efforts to help the victims of Hurricane Harvey in Texas.  While MacDonald encouraged Granite Staters to assist those in need, he warned them to also be cautious.  Said MacDonald, quote:

“Unfortunately, every time a disaster strikes, there are scam artists who take advantage of people’s good intentions and set up fake appeals to assist those in need.” 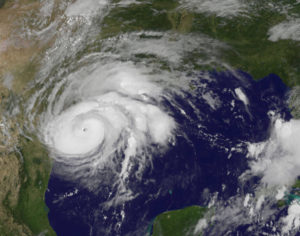 Be wary of relief solicitations

He suggested people give to well-recognized charities that have a track record of service, such as the American Red Cross, United Way of Greater Houston or the S P C A of Texas. H e also said that, for larger charities, check out their reputation on Charity Navigator, the Better Business Bureau’s Wise Giving Alliance or GuideStar and research the organization’s website.  Quote:

Unless you know the people seeking donations, think twice before giving to individuals raising money through online giving sites such as GoFundMe, CrowdRise or YouCaring. You cannot be sure that your gift will be used as intended, plus donations to individuals are not tax deductible. Instead, look for online giving campaigns, whether appearing on GoFundMe, Facebook or elsewhere that benefit charitable organizations assisting a larger number of people.”

MacDonald also had cautionary notes regarding celebrity endorsements, other fund-raising efforts and suggested resources to screen those who may solicit your support.  We’ve published the alert at Girard at Large dot com and linked to it from this news read for your convenience. 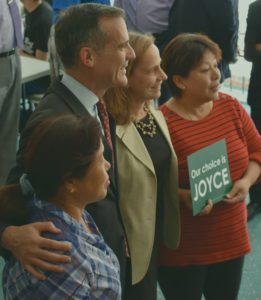 Garcetti: He’s for her.

Manchester mayoral candidate Joyce Craig raised some eyebrows yesterday with a Facebook post thanking Los Angeles Mayor Eric Garcetti for headlining a fund-raiser benefiting her campaign.  Garcetti’s made headlines nationally for defying the Trump Administration’s crackdown on sanctuary cities, of which Los Angeles is one, and for pushing mayors across the country to commit their cities to honoring the Paris Climate Accord, which the Trump Administration withdrew the country from.

Craig has criticized incumbent Mayor Ted Gatsas for not supporting the accord.  She was also silent as controversy swirled around then state senate candidate Kevin Cavanaugh, whom she endorsed and worked very hard for, who stated Manchester should become a sanctuary city, a statement which drew a rebuke from Manchester Police Chief Nick Willard.

Long: Wants to add Kalivas Park to the smoking ban

Aldermen in Manchester will consider whether or not to extend the smoking ban in five downtown parks to a sixth.  While early reports indicate that the ban has led to significant improvements at Veterans Park, Victory Park, Stanton Plaza, Bronstein Park and Pulaski Park, it’s been a disaster apparently for Kalivas Park, which is located right behind the SNHU Center.  At a meeting of the Committee on Lands and Buildings on Monday night, Committee Chair and downtown Alderman Patrick Long pushed to add Kalivas to the pilot program the alderman adopted banning not just smoking but all tobacco products in the downtown parks as a way of cracking down on drug use, vagrancy, litter and denigration of the parks. 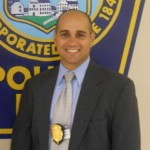 Capano: Made the case

Police Chief Nick Willard asked the aldermen to enact a citywide ban on smoking and tobacco products in parks after a spike in overdoses caused by the use of spice.  Assistant Chief Carlo Capano said the ban on tobacco smoking and other products was necessary because drug users were hiding the drug materials inside cigarettes, cigarette packs and cartons, and in the containers for things like chewing tobacco. 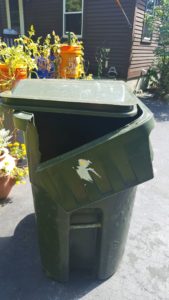 From a resident on  Morse Rd 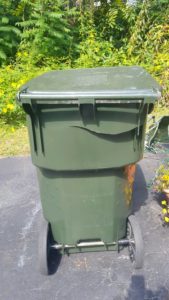 From the other side

Seems our discussion about trash collectors in Manchester intentionally crushing garbage cans struck something of a nerve yesterday.  A loyal listener sent us a link to a complaint made by another citizen via the city’s mobile app.  It reads as follows, quote:

As a resident of Ward 4, some disturbing destruction of property was witnessed yesterday, Tuesday 7.11.17 during the weekly trash pick-up. After collecting the trash, the crew tossed the green receptacles into the back of the truck and lowered the ‘crusher’ down on the bins and cracked them! Then they slapped a “Damage” sticker on the side of the barrels THEY destroyed.
Why are we expected to replace the receptacles at $75 a piece?
Please help us understand, how this is our fault.
Thank you for your concern and interest.
RuthEllen Mason

We’ve linked to it so you can take a look for yourself and see others who report the same issue. 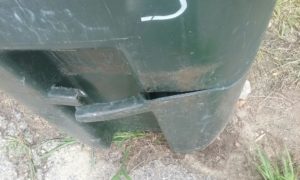 From a resident on Laurel St.

The Department of Public Works closed the matter, writing in response, quote:

This matter was thoroughly investigated by the Solid Waste Compliance Officer and the leadership here at DPW.

The trash carts are connected to a lift on the back of the truck and are raised up by the truck’s hydraulics. The damage of the container is from general wear and tear, not from any malicious action of the workers. The trash carts we sell are made of very durable plastic and come with a ten-year warranty from the date of manufacture however, it has been determined that your trash carts are over 13 years old which exceed the manufacturer’s 10 year warranty.

These carts needs to be replaced at the property owners expense.”

You should see the cat calls that response drew.  It’s all at the link.