I remember years ago when the former U.S. Secretary of Eduction, Arne Duncan, made a bold statement when he said:

“As a country we’ve dummied down standards. We’ve reduced them due to political pressure and, we’ve actually been lying to children and parents telling them they’re ready when they’re not.”

What happens when a school district is in the spotlight for being successful, but the teachers and students who attend the school or have graduated, say something else?

Sanborn is one of the school districts in New Hampshire that has implemented many of the federal education reforms like Common Core and Competency Based Education (CBE).  Sanborn is also using the PACE assessment which is the Competency Based Assessment.  I’ve been highly critical of CBE in the past, because it is a dumbed down workforce education model versus a liberal arts model focused on literacy and knowledge.
During President Obama’s term in office, the U.S. Department of Education began the process of redesigning public education in America. This included schools using Competency Based Education and the dumbed down Common Core and Next Generation Science Standards.   Some of you may remember the failed attempt at Outcome Based Education in the 90’s.  Competency Based Education is essentially the same model with a new name.  CBE shifts the focus away from literacy and academics to empty “workforce skills.”  There is less of a focus on academics and more of a focus on dispositions and attitudes.  Valuable learning time is taken away in order to make sure students have the right attitudes in so-called 21st Century skills, like diversity.
Sanborn has been held up as a district where over half of students leave high school completing one college course.  As you can see from the post below, Brian Stack from Sanborn, was in Washington D.C. to talk about what Sanborn does to prepare students for college and career. One of the graduates from Sanborn attempted to dispute this claim, but her comments were removed from the district’s Facebook page. 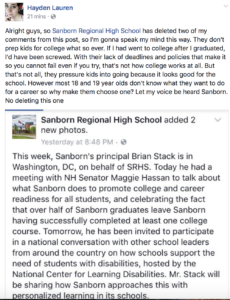 It appears as if Sanborn is now censoring comments from actual students who offer contradictory facts and information.
Hayden Robinson, who goes by Hayden Lauren on her Facebook page, responded to Sanborn’s post by saying,

“Alright guys, so Sanborn Regional High School has deleted two of my comments from this post, so I’m gonna speak my mind this way. They don’t prep kids for college what so ever. If I had went to college after I graduated, I’d have been screwed. With their lack of deadlines and policies that make it so you cannot fail even if you try, that’s not how college works at all. But that’s not all, they pressure kids into going because it looks good for the school. However most 18 and 19 year olds don’t know what they want to do for a career so why make them choose one? Let my voice be heard Sanborn. No deleting this one.

Other Sanborn graduates then commented on her post acknowledging the numerous problems they had while attending Sanborn Regional High School.  Another student commented:

“Oh you mean like the reply letter to my transcript from Missouri saying “We don’t understand your transcript or grading system”.

“Hayden Lauren A ton of people got those, like the really nice colleges too”

Colleges cannot understand the Competency Based Grading that Sanborn is using in the district.  How does this help students who want to apply and attend college?
As the comments focused on the failures of CBE one Sanborn Grad said,

“if it helps any, the teachers dont like it either. I know a few teachers who loath it.“

Hayden Lauren “It’s true, which is why so many left, it’s crazy”

When I asked about this propaganda video put out by the New Hampshire Department of Education promoting the PACE assessments, Hayden said:

If you’ve attend a State Board of Education Meeting, you will hear how wonderful Sanborn is doing with Competency Based Education.  I guess when you censor comments and silence students (and teachers), you can sell propaganda–  even to a United States Senator.   Maybe Senator Hassan should take time and sit down with the actual students who could offer her a critical analysis on what’s really going on in Sanborn.
Finally, one parent (Hayden’s mother) summed it all up with this statement:

Joyce Lalumiere Robinson Not to mention their State & National testing scores have been going down over the last 10+ years. They think they are doing such good for their students – but in the long run, they are just hurting them.

Is this a case of a district claiming success in public education but ignoring the data and personal stories from students who’ve graduated?  It sure looks that way.  Why would they not want to hear from the students who’ve graduated on whether or not they’ve been successful?  28% of the 11th grade students scored proficient in math in 2015-2016 at Sanborn Regional High School.  Is that what we now consider successful?  Is this what Senator Hassan wants to present as success in New Hampshire public education?  Why wouldn’t she take the time to look at the data and listen to the students and parents?  Half of the graduates passed one college class and that’s now the measurement for success?

Hayden told me that she had a teacher at Sanborn who talked about how some of the teachers hated the grading system and hated what they were doing to Sanborn. I’ve heard this from other teachers in New Hampshire, too.  Unfortunately, these teachers will not speak up publicly because they know that’s a way to receive a pink slip at the end of the year.

That now begs the questions:  Is Sanborn now lying to parents as the former U.S. Secretary of Education has suggested in the past?