Sports In Our Own Backyard

When: Thursday mornings at 7:40

Browse the Sports In Our Own Backyard segment archives.

The Manchester area has vibrant high school, recreational league, college and semi professional sports.  It also has some fierce sports rivalries that have spanned the decades, particularly in high school.  In this segment, we get the inside scoop on what’s happening with all of it from Coach Jimmy Lauzon.  He’s played them, he’s refereed and umpired them, he’s coached them.  He knows who to watch, when and why.  He also has keen insights into what’s helping and hurting sports, kids and teams and he’s unusually candid in point them out.  If you love sports, or even if you don’t, you’ll find this segment interesting and fun “must hear” riveting radio! 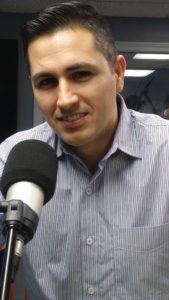 A Manchester native, Coach Jimmy Lauzon played football and baseball for Manchester High School West from 2003-2007.  He graduated from New England College in Henniker, NH in 2011 with a Bachelors Degree in Communications.  There, he played catcher for four years and was team captain for two.

While in college, he volunteered as an assistant of his high school alma mater’s football team, wrote for the Bedford Bulletin and the New Enaglander, NEC’s college newspaper.  He also hosted a radio show for 3 years on the campus radio station.

Lauzon became the head football coach at Manchester West in 2011, at 22 years of age.  He worked as a paraprofessional in the school and also coached baseball and track.

In 2012, he went began coaching the running backs and tight ends for the Saint Anselm College football team.

In 2014, he snagged the job as Londonderry High School’s head football coach.  He also coaches football, baseball, and basketball at Londonderry Middle School.

Lauzon is a sales associate at Glenwood Investment Group.  Lauzon and his wife Christina, a high school cheerleading coach, live in the Queen City and have two very active young boys.