The nomination of Frank Edelblut to Commissioner of Education in New Hampshire has proven to be one of the dirtiest political games in a long time. From the inquisition by Executive Councilor Volinsky, to the Chairman of the Board of Education Tom Raffio playing politics, this leaves parents wondering if anyone will ever hear their concerns,.

Legislators have tried to remove Common Core through proposed legislation only to have it vetoed by Governor Hassan. Parents have brought their children and filled the room telling stories about how Common Core is damaging their children’s education. Many of these parents have been in tears while the State Board of Education members sat there ignoring the ugly consequences of their actions.

I attended the Executive Council meeting and watched Councilor Volinsky grill Frank Edelblut on his religious views. I sat there shocked that he would act as if it’s ok to put a nominee on trial for their religious beliefs. Volinsky’s political posturing looks frightfully similar to the same group of people who attacked John F. Kennedy because of his Roman Catholic Faith. Unfortunately, it looks as if Volinsky learned nothing from history and the bigotry aimed at JFK.

Volinsky never asked Edelblut about the dumbed down Common Core reforms that are now plaguing New Hampshire schools. This is the biggest issue facing parents in NH right now and why many parents voted for Governor Sununu.

Volinsky just set the precedent for future nominees. He showed he has a litmus test based on one’s religious views, not based on factual evidence that the nominee has denied individuals their basic human rights. If this is now the criteria, everyone should be afraid. Bigotry and intolerance has no place in the vetting process. There were legitimate questions on Common Core and academics that should have been asked but Volinsky missed that opportunity while he conducted his religious inquisition.

Now we have the State Board of Education under Chairman Tom Raffio issuing a statement of “no confidence” in Frank Edelblut. In Raffio’s statement he says he shares the concern from the 57 individuals who contacted them regarding the nomination of Frank Edelblut. Where is his concern for the 1796 people who’ve signed the petition to get rid of Common Core in New Hampshire? 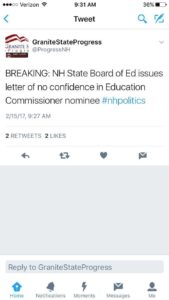 Where is his concern for the New Hampshire parents like Stacie Ohsberg or Heather Day who withdrew their children from a public school and now home-school because of Common Core? They’ve gone ignored for years by the political partisans in New Hampshire who’d rather play politics with our kids instead of fix the damage they’ve inflicted on our public schools.

I lost confidence in our State Board of Education years ago when they ignored parental concerns for the Common Core Standards and recently when they voted for the dumbed down Next Generation Science Standards . The fact that they want to come out now and play politics with this nomination shows us that expecting the best for our public schools is not their priority.

Where were these board members when President Obama named Arne Duncan as U.S. Secretary of Education during his term? Arne Duncan never taught in a public school, didn’t have a degree in education and sent his children to a private school.

They were busy implementing the federal Common Core education reforms that is dumbing down our schools.  It seems as if there is a double standard here and it smells like partisan politics.

Here is what scares the political establishment in New Hampshire–they are afraid that someone will listen to parents. Governor Sununu campaigned and won by promising to scrap Common Core. He chose the person he thought was best for this job and no one proved Edelblut was INCAPABLE of doing this job.

Today Frank Edelblut was confirmed as the Commissioner of Education in New Hampshire. In spite of the attacks and unfounded fear, the Executive Council voted to confirm Frank Edelblut. The vote was split down party lines with Volinsky (D) and Pappas(D)  voting against the nomination and Wheeler (R), Kenney (R) and Prescott (R) voting for the nomination.

It’s important that parents continue to make their voices heard. Write and attend public hearings and continue to let those in charge of public education know the kind of damage they are inflicting on our public schools. Make sure you support decisions by the new Commissioner that improve the quality of public education in New Hampshire.

For the past seven years, we’ve seen the dumbing down of our public schools. Voters in November made it loud and clear that they want to go in another direction. We can now see that partisans on the left are going to try to derail those efforts so it’s even more important that parents become involved in this battle.

Parents across New Hampshire, no matter if they are Democrats or Republicans, deserve better quality public schools for their children. That will not happen unless they demand better from those who are in charge. We now have people in place who are committed to quality public schools and who will listen instead of ignore you. It’s a good time to thank Governor Sununu for his commitment to public education.

Ann Marie Banfield is an Education Researcher and has been volunteering her time for Cornerstone Action in New Hampshire. She advocates for excellence in public education and for parental rights.