(a)  Not less than once every ten (10) years the board of mayor and aldermen shall cause the question of charter revision to be considered by the voters under the provision of state law.  Except as set forth below, nothing in this provision shall limit the availability of the charter amendment process provided by law.

If you favor this proposal, vote YES; if you do not favor it, vote NO.

It’s not that simple.

Proponents of the amendment argue that it will allow the city to make future changes without requiring state legislation.  It strengthens local control, they say.  It gives the city more freedom to make the changes it wants to govern itself, particularly the schools.

This question came from the charter commission elected, it thought, to revise the charter to make changes to the city’s schools.  Turns out, they were actually elected simply to come up with a process that would enable amendment to the city’s charter for the schools, not develop amendments to the charter.  Anyway, that commission, was established by a bill that State Rep. Pat Long (D-Ward 3) introduced while an at-Large member of the Manchester Board of School Committee.  He submitted the bill with the backing of Mayor Joyce Craig (D-Ward 1) after board discussions about giving the school board full budget authority; meaning the school board would have the ability not only to develop its own budget, but also to issue its own tax bills.  Currently, the Board of Mayor and Aldermen appropriates the school budget and authorizes the collection of taxes to fund it.  Those backing this amendment want that authority to rest solely with the Board of School Committee.

Knowing that is important if one is to understand the purpose of this amendment.  As it stands now, there is NOTHING that prevents a charter commission from addressing any issue affecting the schools in the charter.  As someone who was elected to serve on the Charter Commission in 2012, I can tell you that we spent a significant amount of time discussing school issues.  Inasmuch as the schools are covered in the charter, amendments relative to how the schools are governed are matter of course.  If that’s so, and it is, what’s the point of this amendment?

It’s to prevent the city from having to go to the General Court for “enabling legislation” that would allow the school board to appropriate its own budget and issue its own tax bill, depriving the citizens of this city a vital check and balance against increased taxing and spending.  Remember, NH really is a “Mother May I?” state.  Local communities may not do anything that is not specifically allowed by state legislation.  Since Long’s bill specifically allowed legislative approval to be bypassed, adopting this amendment creates the bypass the “spend more money crowd” so badly wants.  Here’s a real life example of how this affected a charter change in the past.

You may or may not recall that not all that long ago, Manchester voters, by about a twenty point margin, approved an amendment to the charter that reincorporated the school district as a department of the city, which it had been virtually since the founding of the city in 1846.  It was separated from the city during the superintendency of Normand Tanguay in the late 90s-early 2000s, when the school board sued the city to establish itself as a district.  The result is what we have today.  After the overwhelming vote by the citizens of the city, the school district again brought the city to court, claiming state law didn’t allow for the district’s reincorporation.  They won and the court struck down the amendment.  Shortly thereafter, then State Rep. Will Infantine (R-Ward 6) sponsored a bill that enabled the district to be restored as a department.  Quizzically, the question wasn’t put back on the ballot after the bill passed so the change was never made.

Proponents of giving the district budget and tax authority don’t want to have to go to the legislature before a vote to clear the way for that charter change.  They know it would doom the vote to have that kind of publicity in advance.  They also learned that going to the legislature after a vote means the people would have to vote again if it passed, which would also likely doom the vote.  If they can clear the way when people aren’t thinking about the changes it may enable, then it makes it easier to set the stage for such a major change.

On paper, the “Vote Yes” campaign is being led by Ward 2 resident Patrick Houghton.   Who’s that?  He’s just an ordinary guy who happens to be very close friends with Hillside Middle School teacher Patrick O’Neil, a frequent advocate of increased school spending and brother to Dan O’Neil, chairman of the Board of Aldermen.

While the Association of Manchester Principals and the Manchester Education Association have not officially endorsed the effort, they are, nonetheless, actively encouraging the “Vote Yes” campaign.  They have long pushed to remove the aldermen from the school budget process and this question provides them a golden opportunity.  The unwavering desire of these unions and other special interests are, not doubt, motivating Craig, Long and others who want the schools to have complete authority to tax and spend, like at-Large Committee Member Jim O’Connell and the Manchester Democratic Committee, are backing the “Vote Yes” campaign. 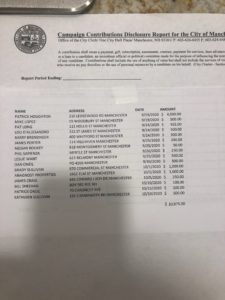 The Concerned Taxpayers of Manchester and the Manchester City Republican Committee are opposed.

In summary, the only reason for this question is to bypass the need to get the General Court to pass legislation to enable a charter commission to give Manchester’s school board the ability to appropriate budgets and raise taxes.  That makes it much easier for the unions and special interests to influence school taxes and spending as it would totally eliminate the Board of Mayor and Aldermen, a body subject to the mayor’s veto and bound by the Tax Cap, from the equation.

Join me in voting NO! on Question 1!

Publisher’s Note:  This article was edited following a conversation with Patrick Houghton, the person who has organized the Vote Yes campaign on this question.  Houghton explained that he is not close friends with Hillside Principal Brendan McCafferty as originally reported, though they are acquainted given his children’s attendance at the school.  He also vigorously disputed our assertion that the Association of Manchester Principals and the Manchester Education Association were working through Vote Yes in the hopes of persuading the public to vote in favor of the question.  According to Houghton, he asked both unions to officially back the effort and both declined.  After double checking the notes from our sources, we have now corrected the article to reflect these changes and apologize for the unintentional misrepresentations and express our appreciation to Houghton for bringing this information to our attention.