No matter what side of the election one was on, yesterday’s elections were decisive.

The chairman of that pro-Pinkerton contract committee, Phil Dumbo Denbow, who not only defended but advocated for the misrepresentation of Manchester’s tuition costs in that committee presentation was simply humiliated by Joanne McHugh.  The vote tally was one thousand twenty seven to six hundred thirty seven.

The ballot question asking voters to approve the tuition contract with Pinkerton Academy also went down to ignominious defeat as one thousand twenty six voted no and seven hundred ninety two voted yes.

When the new, and some would say improved, Hooksett School Board meets this Tuesday, the board will have a total of seven members, five of whom will be new, though Sullivan and McHugh have served on the board in the past.  Now we’ll see whether or not the last two standing members of that board, John Lyscars and David Pearl, will continue in their roles as The Angry Elf and , or whether or not we discover they were merely rebelling against the majority that just didn’t play by the rules or nicely in the sandbox.  For his part, Lyscars released a statement calling for a “day of forgiveness” by all parties of all parties so the board can begin anew.

Manchester Mayor Ted Gatsas told Girard at Large that the city of Manchester looked forward to working with the new board to address items of mutual concern and congratulated the winners.  Board of School Committee Vice Chair David Wihby said the board has worked hard to address Hooksett’s complaints and that a lot of changes have been made to accommodate the town.  Both were hopeful the relationship between the two boards would improve and the century long relationship between the two communities would be built on, as apparently the vast majority of people in town want.  Ward Six Committeewoman Robyn Dunphy and Ward Seven Committeeman Ross Terrio said they were glad Hooksett decided to stay in Manchester in facebook posts under our announcement of the results.

In Bedford, voters similarly failed to approve a new safety substation proposed for South River Road by the needed two thirds majority.  The vote was twenty six thirty six to two thousand eleven in favor.  They did, however, overwhelmingly approve a thirty million dollar bond to fix the town’s dilapidated roads.  The question easily cleared the two thirds hurdle winning seventy two percent of the vote.

Things didn’t go too well for invading colonizers Matt Philips and Aaron Day.  Philips came in a distant third of four in the race for Town Council that saw Council Chairman Chris Bandazian lead the way with thirty five hundred seventy votes.  Jim Aguiar was elected with twenty two hundred forty one and Philips picked up twelve hundred ninety eight votes.  Candidate David Coles ran last with six hundred eighty.  On the school side Bill Foote was reelected to the board and will be joined by Dr. Bill Kassler.  We’d love to give you the vote counts, but they’re not posted to the town’s Web site and, well, our poll watchers didn’t send their numbers figuring they’d be on the town’s site.  The link on Bedford’s site to the school results is coming up with a four oh four error, link not found.

For those in the audience interested in the outcome of the Executive Council race in District One to choose a successor to the late and legendary Ray Burton, Republican Joe Kenney pulled out an upset win against Democrat Mike Cryans, a Grafton County Commissioner.  It was a hotly contested race in which Governor Margaret Wood Hassan and the Democrats brought the rain, but they got all wet in the end.  With a more than thousand vote lead early this morning, Kenney declared victory despite Cryans’ refusal to concede.

That’s news from our own backyard, Girard at Large hour ___ Live from the Blarney Breakfast starts right after this!

Thursday, February 19, 2015 in the NH House of Representatives 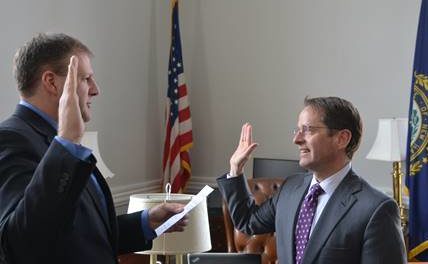