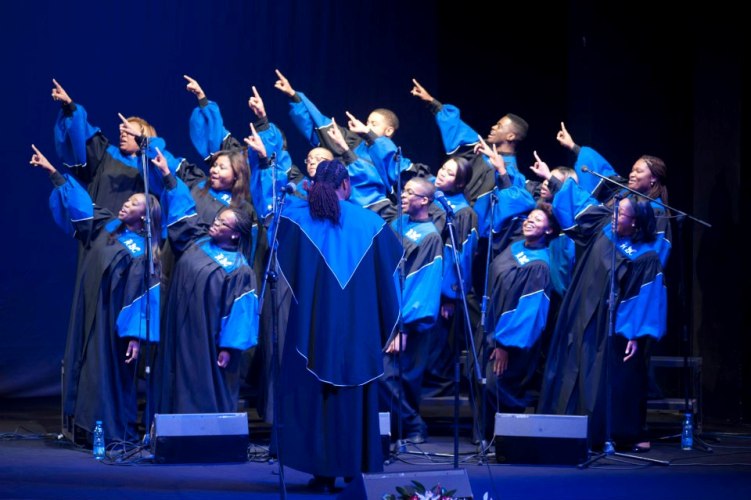 Rich talked to Kristen Taylor, who is the Assistant Business Manager of the Howard Gospel Choir of Howard University.  They spoke about Gospel as an art form, ties to the African American community, their upcoming performance and more.  Tune in to get all of the details!

§ In 2014 the choir recorded their first full length album in almost two decades entitled Glorious God. The album was released in April 2016. The album is currently available on all digital platforms (Itunes, Amazon, Google Play) and streaming platforms (Spotify, Apple Music and Tidal). The album is also available for purchase at: howardgospelchoir.com/gloriousgod.

§ The album is a diverse collective of musical offerings that reflect the choir’s rich musical legacy including spirituals, anthems and contemporary gospel.

§ The album was produced by both musical directors, Reginald Golden and Darrell Brown along with Kevin Golden and Grammy Award and Stellar Award winning Kevin Bond is serving as the production advisor.

§ Musical highlights from the album include:

– EVEN ME, a traditional hymn arrangement penned by Michael Reid is one of the choir’s most request songs. Live clips of the choir’s performance of this song on the choir’s youtube page have garnered over 300k views.

– GLORIOUS GOD the title track of the album penned by producers Reginald Golden and Kevin Golden is an upbeat contemporary gospel selection that the choir has shared with both national and international audiences.

– IN BRIGHT MANSIONS a spiritual arranged by world renowned composer, arranger and conductor, Roland Carter, demonstrates the choir’s versatility and tribute to the musical legacy of the choir and the richness of sacred music.

– GREAT IS THY FAITHFULNESS based on the traditional hymn and arranged by Anthony T. Parker, is a crowd favorite. The song’s simple arrangement and message transforms every audience into a choir. Often the closing song to most concerts, audiences can hardly avoid chiming in.

§ The contributors to this project are a reflection of the choir’s wide reach. The members represent regions from all over the nation and the same holds true for the producers, musicians, soloists and songwriters. Most of the contributors were from Howard University but there was representation from various Historically Black Colleges and Universities including Morehouse College, Morgan State University, Mississippi Valley State and Wilberforce University.

§ Some of the featured soloists include:

– BET Sunday Best Season 7 Winner, Stellar Nominated and Fo Yo Soul Recording Artist GEOFFREY GOLDEN on the song Rain and songwriter of Celebrate the Wonder and co-songwriter of He Loves.

GENERAL INFORMATION (HIGHLIGHTS) ABOUT THE CHOIR

§ Formed on the campus of Howard University in 1968, the Howard Gospel Choir of Howard University (HGC) is a body of students, alumni and members of the community, dedicated to using the gift of music to spread the good news of Jesus Christ. As one of the first college gospel choirs, HGC is a trailblazer for all Gospel music ministries across collegiate campuses

in the nation. The choir is a religious life organization under the auspices of the Andrew Rankin Memorial Chapel where the Rev. Dr. Bernard Richardson is the Dean.

§ The choir was featured in two (2) major network television specials:

The 2016 Kennedy Center Honors (https://youtu.be/zwCg-6WMh9Q). The choir performed during the tributes to Mavis Staples and James Taylor.

The choir was also featured on the Taking the Stage presentation that celebrated the opening of the Smithsonian National Museum of African History and Culture. This event was co-produced by Quincy Jones and the star studded performers including Usher, Patti Austin, Mary J. Blige, the Alvin Ailey Dancers, Stevie Wonder and more. Special guests include 44th President Barack Obama and Michele Obama. (https://youtu.be/B7U65k1rQIE).

§ Highlights from the choir’s local appearances include a special invitation from President Barack Obama to appear at both the 2015 and 2016 annual Easter Prayer Breakfast events at the White House. The choir has also headlined two standing room only crowds at the Kennedy Center Millennium Stage.

§ The choir celebrates the accomplishments of alumni from various backgrounds, including Grammy Award winners Richard Smallwood and Core Cotton of the Sounds of Blackness, as well as Elbernita “Twinkie” Clark and Angela Winbush.

§ The choir hopes that every audience that experiences the Howard Gospel Choir of Howard University will leave inspired, encouraged and re-fueled. Every performance is an exchange between the audience and the choir; everyone does a little singing, a little rocking, and more.

Your Parents and Heart Attacks: Caring for Seniors