In Chamber Chat, we get up to speed on what’s happening in the business, non-profit and community circles in several of the towns surrounding Manchester.  Manchester’s neighbors range from the urban, to the suburban, to the rural, to the really rural and they all have unique opportunities and challenges.  We learn a lot about them in Chamber Chat.  Tune in to this segment, visit their Web sites and get plugged in to all the communities in which they work to learn what it means to be part of New Hampshire’s Merrimack Valley and beyond!

Will Stewart, President of the Greater Derry Londonderry Chamber of Commerce (appears on the first Monday of each month):

Will Stewart was named the Chamber’s President in September 2014. In this role he is responsible for the overall management of the Chamber and oversees the development, growth, and implementation of organization’s programs and budget. He also serves as the Chamber’s key spokesperson and as an advocate for the Greater Derry Londonderry business community.

Will brings significant experience in economic development, community relations, media relations, and government affairs. He most recently served as Vice President of Economic Development & Advocacy at the Greater Manchester Chamber of Commerce, where he managed and directed that organization’s economic development and advocacy efforts by representing the organization to local, state, and federal policymakers. He also played a key role in the advancement of the Chamber’s strategic goals and policy priorities on key issues such as education and workforce development, downtown improvement, transportation infrastructure, green business practices, and workforce housing.

Prior to his Chamber experience, Will worked as a community organizer for NeighborWorks Southern New Hampshire and as a reporter for HippoPress and for the Southern Standard newspaper in McMinnville, Tenn.

Actively involved in community efforts, Stewart also serves in leadership roles for several area volunteer organizations. He is lead organizer of Bike Manchester, a Queen City bicycle advocacy organization; captain of the Oak Park Neighborhood Watch in Manchester; and a board member of the Friends of Stark Park.

Ted Donohue, Hooksett Chamber of Commerce Board of Directors (appears on the second Monday of each month) 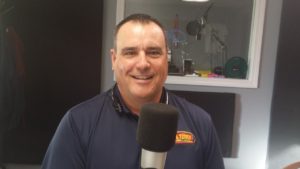 Ted Donohue is a member of the Hooksett Chamber of Commerce Board of Directors and the Service Operations Manager of Hooksett based Al Terry Plumbing & Heating,  a family owned and operated business that was established in 1976. Ted is a veteran of the United States Air Force who served in Operation Dessert Watch and Dessert Shield in the early 1990’s.  He brings many years of business operations management experience from his 18 years owning and operating a small wireless telecommunications consulting company and raising 2 girls as a single dad.