From time to time, Girard at Large host Rich Girard, that’s me, not only reports the news, he makes it.  Such is the case this morning as I take the first person in this newscast to announce that I will retire this show effective with our sign off this Friday, November seventeenth.  (Click here for the more thorough explanations given on this morning’s show.  Click here for the Union Leader’s story on the announcement.)

It’s been a good run!

The planning for this show, which launched on September twenty sixth, two thousand eleven, began more than six and a half years ago with the belief that there was an appetite for local news, the inattention or inability of area news outlets to report on it notwithstanding.  As a member of our Large and Loyal Listening Audience, you know that that belief was well founded as Girard at Large brought to the region’s attention multiple stories and issues that would otherwise not seen the light of day.

Our target area in white, green and blue

This show has become a popular venue for people of all walks of life to get the word out about important things happening in Manchester and many of the nineteen communities our radio signal reaches.  It would be fair to say that people up in Concord, or those who wanted to get there, and in Washington, or those who wanted to get there, were paying attention as well, given our focus on how what was happening in either place affected us right here in our own backyard.

With Facebook and Twitter pages that were routinely reaching better than twelve thousand people, and that was on a bad week, audio archives that were being clicked on fifty thousand times per year, and news and Oh My BLOG! and meeting blog posts that were clicked on thousands of times per month, we also established a formidable on-line presence that effectively brought new and old media together to form a consequential media presence. 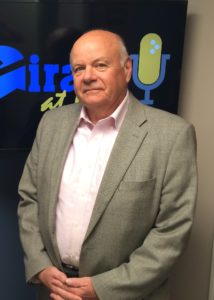 All this begs the question, if all is going so well, why stop now?  That is not an easy question to answer, but it is relatively simple.  The answers lie in the unexpected and sudden death of my father, this past June, on my parents’ forty ninth wedding anniversary, at the relatively young age of seventy two.  At forty eight years of age, it dawns on me that seventy two is not that far away and I should no longer ignore the stresses and consequences of getting up at three thirty in the morning and getting four or five hours of sleep, if I’m lucky.  I’ve gone beyond what I’ve come to call “functional exhaustion” and things have started to slip.  With a wife of twenty plus years, my son on his way to college, two of his sisters right behind him in the next two years, and my kindergärtner and first grader off in the distance, slipping is not acceptable.

In addition to catching up on some much needed sleep and having more time for my family, including my mom, I will have more time for my financial services business and my school board seat.  I will continue with my weekly Girard at-Large T V Show on Manchester Pubic Television Channel Twenty Three and will continue to share what I know via the formidable aforementioned on-line outlets, as will many of those who contributed both on the air and on line.  And, while there are other opportunities that we are currently reviewing for us to continue to bring you “NEWS from our own backyard to connect LOCAL people, places and things,” this broadcast will come to an end, albeit with a heavy heart and a profound gratitude I could never express to all who made it possible and those of you in this Large and Loyal Listening Audience who made it worth every ounce of time, effort and energy I, and so many others, poured into it.

News from our own backyard continues after this. 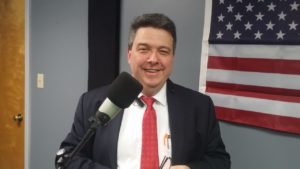 Bevill: Urging parents to speak up

The no “homework-grade” policy in Merrimack is again going to be on the school board’s agenda and parent Bob Bevill is urging his fellow parents to attend the meeting.  Bevill and others have taken issue with the policy that prevents teachers from grading or even reviewing assigned homework.  Assistant Assistant Superintendent Mark McLaughlin implemented the policy at the beginning of this school year without board approval and the board’s been fumbling with the issue ever since.  McLaughlin said the change was made to encourage “deeper learning,” that’s Common Core speak, by the way, and that children who failed to do their homework or do it well would ultimately suffer academically.  It was, he argued, a way of making them responsible for their own education.

Bevill, whom we’ve interviewed about this topic on Girard at Large, agrees that there will be consequences for kids who fail to take their homework seriously, which is why he wants teachers to review and grade it.  He says kids’ academic performance will falter, damaging their ability to go to college.  He also said that McLaughlin has failed to provide any data showing the policy was successful in other places.  The meeting will be held at seven held on Monday, November 20th at Town Hall.

The Auburn Board of Selectmen will meet tonight at seven in Town Hall.  The meeting starts with a public hearing on the receipt of more than one hundred thirty seven thousand dollars from the state for infrastructure projects.  The town is proposing to use the funds to build a salt storage facility, provide temporary driveway access to those affected by the shutdown of the Griffin Mill Bridge, engineer plans for a multi-use path along Route 1 2 1 from Eaton Hill Road to Shore Drive and improve drainage on Dartmouth Drive.

Also on the agenda, the board will continue with its budget reviews, looking at the Police Department, Conservation Commission, Welfare, Health and General Government budgets.  We’ve linked to the agenda with all the details from this news read at Girard at Large dot com.

You’ve heard about it on the news and chances are you have heard about kids trying it, but what, exactly is vaping?  Find out at BeBOLD’s monthly Speaker Series Event on Monday, November 27th from seven to eight at the Bedford Public Library.

Bedford Police Chief John Bryfonski, officers “Spike” Donahue and Danielle Nightingale and the resource officers from various schools will provide the facts about vaping and answer questions like:

In addition, Dr. Joseph Hou, a pulmonologist at Catholic Medical Center, will provide clinical information on vaping, addressing questions such as:

For more information on the seminar or about BeBOLD, which stands for Bedford Building Our Lives Drug Free, visit be bold bedford dot org.