Aldermen on the Human Resources and Administration committees met in joint session last night to review a proposal to reinvent, yet again, the structure of the city’s economic development functions.  It wasn’t long ago that the Board of Mayor and Aldermen voted to accept a proposal formulated by Ward 3 Alderman Patrick Long to establish those functions within the Office of the Mayor.  However, Long said he heard from business leaders that they wanted guaranteed stability of the employees in those positions and housing them in the Mayor’s Office, where they’d serve at the will of any mayor, wouldn’t provide that guarantee.  Long revised the proposal to reestablish it as an independent department.  The committee tabled the matter last night at the request of Ward 4’s Jim Roy, who said he wanted to see the audit report of the department before changing his mind and his vote on whether or not a two person operation should be a department.  Ward 12’s Patrick Arnold, who was in the super minority when the original proposal passed, questioned whether or not the reduced salary proposed for the Economic Development Director, it would start at just sixty seven thousand dollars per year, would be sufficient to draw qualified applicants.  Ward 2’s Ron Ludwig and Alderman at Large Joe Levasseur had similar questions.  Before moving the matter to the board, Chairman Bill Shea of Ward 7 said the committee needed to determine whether or not it should be a division of another department, its own department, what the pay scales for the employees should be and what their job descriptions should entail and what the audit report of the prior operation said before moving on to the full board.  Roy, Ludwig, Shea and Ward 10’s Phil Greazzo voted to table.  Levasseur and Ward 11’s Norm Gamache opposed.  Arnold wasn’t a member of the joint committee.  We’ll have more on this during the show.  My notes are in the live blog section of Oh My BLOG! at Girard at Large dot com.  It was an interesting meeting.

In other city business last night, the Committee on Administration took up the matter of pooch poop around the city.  Stephen Stefanik, who presented the committee with pictures showing bags full of poo that had been left around his South End neighborhood and piles that hadn’t been picked up off people’s front lawns faulted the city ordinance that requires law enforcement personnel to be present if the poop isn’t picked up or if no bag is evident to pick it up.  We’ve posted his presentation with this newscast at Girard at Large dot com.  The committee’s taken the matter under advisement.  In other business, the committee tabled a discussion on the waiver of fees for nonprofit groups until they got additional information from various departments and heard from the police department about cell phone usage and reimbursements which seemed to me to be a non issue, frankly.

On top of the troubles roiling KC’s Rib Shack in Manchester, the place was broken into last night and burglarized.  Owner Kevin Cornish let us know about it first thing this morning.  Two thieves used a crowbar to pry doors open and took two cash boxes and the computer terminals they were attached to amongst other damage done.  Security cameras were able to catch the criminals, however it was dark inside and unknown whether or not there are any usable images.  We’ll still be hearing from Cornish this morning.

A second of the ninety races in which there could be a primary in Manchester’s elections this fall has had enough people file to create one.  Liberal, pro-labor Ward 2 State Rep. Linda DiSilvestro has filed her candidacy for alderman in the ward.  Former City Clerk Leo Bernier curiously filed for School Board in Ward 10 where incumbent John Avard is seeking reelection.  In Ward 4 Shuvom Ghose filed for Alderman where incumbent Jim Roy remains undecided about a run.  There were other filings yesterday as well.  We’ve got the complete rundown of who’s filed, who hasn’t, who will, who won’t and who’s unsure in the two thousand thirteen election news section of our news page at Girard at Large dot com.  Who knows, this thing might get interesting yet. 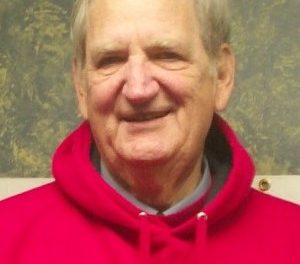