Another Manchester alderman who witnessed the verbal altercation between Alderman at-Large Joe Kelly Levasseur and Manchester Police Patrolman Association President Steve Maloney says he saw no physical contact, as claimed by Levasseur.  Ward 10 Alderman Phil Greazzo said he witnessed a shouting match as he left City Hall that January evening after police personnel called for Levasseur to resign over denigrating comments he made about them on his community  TV show, but no physical contact.  Ward 3 Alderman Patrick Long and Ward 4 Alderman Jim Roy, both of whom witnessed the entire brouhaha told Girard at Large Maloney kept his hands to himself, that none of the physical contact Levasseur claimed took place happened.  Neither Long, Roy nor Greazzo had any insight into why it took Levasseur nearly 8 months to claim he was assaulted and accuse Police Chief David J. Mara of a cover up.  Long said he doesn’t believe that Mara’s covering anything up.  Roy dismissed the whole thing as foolishness and Greazzo said if Levasseur’s trying to draw attention to things he thinks are wrong at the department, he should work through the board where something can get done, not through the press where nothing can get done.  All questioned the motivation behind his actions.

Girard at Large has sent an email to Manchester Superintendent Dr. Debra Livingston requesting the basis for her claims that if the school district doesn’t align its curriculum to the Common Core standards it will lose twenty one million dollars in federal funding.  In the request asking for any written documentation that supports her claim, we also asked to know specifically what funds would be lost.  We’ve posted the email with this news read at Girard at Large dot com.  Thanks to a listener, Girard at Large has obtained video of state Department of Education official Heather Gage very clearly telling the Alton School Board that there are no federal funds tied to the adoption of the Common Core standards (starts at minute 15), which, as she said in Manchester, is voluntary.  She did say that districts had to agree to assessment tests, but that there were alternatives to the Common Core assessments and that the D O E would assist communities in seeking waivers with the feds, who supposedly aren’t involved in this, to those requirements.  We have spoken with several about this question, including Dr. Sandra Stotsky who was on the Common Core English standards validation committee, was a member of the Massachusetts Board of Education and a guest on our show, who said she knew of nothing that would deprive communities of funding if they failed to realign their curriculum.  Meanwhile, Girard at Large has learned that Mark Tucker, the man who wrote the article explaining how to nationalize education by eliminating local control to centralize power in state boards of ed will be coming to NH this fall in an attempt to thwart growing opposition to Common Core in the state.

News from our own backyard continues right after this.

The mayor’s campaign has seen its first dumb political stunt of the season.  The campaign of Patrick Arnold released a statement saying he was looking forward to debating both his primary opponents on September eleventh on the Manchester Public Television shows hosted by Gatsas adversaries Bob Backus, who twice ran against Gatsas for the state senate and Alderman Joe Levasseur and moderated by Arnold supporter School Board Member Sarah Ambrogi.  Only problem is that nobody actually invited Mayor Ted Gatsas to the debate.  We contacted Arnold campaign manager Kevin Hodges who said his information was that Gatsas had agreed to debate.  When told that wasn’t the case and asked where he got that info, he ultimately said he got it from Arnold.  Hodges was unable to answer several questions posed in our interview, referring me instead to Backus and Levasseur, saying it was their deal.  We put a call into Arnold personally to see if he knew what was going on.  That was two days ago and still no reply.  I’m thinking they want to run far far away from this amateur stunt.

The Manchester Police Department is asking folks to be respectful of their neighbors during the upcoming holiday weekend.  Specifically, motorcycle operators are asked to refrain from revving their engines excessively when driving in the city since this type of driving creates a significant amount of noise, particularly in the downtown area.   All motorists are asked to keep their car radio volume at a respectable level.   The department says it will be focusing on these types of issues over the holiday weekend and is asking for our cooperation in keeping the noise levels to a minimum so that everyone can enjoy their time in the city.  I’m thinking there’s a Joe Kelly Levasseur joke in here somewhere, but I digress…

That’s news from our own backyard, Girard at Large hour ___ is just strait ahead

Monday, April 4 in the NH House 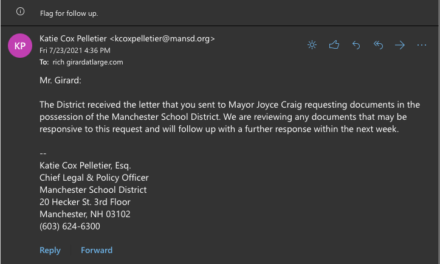