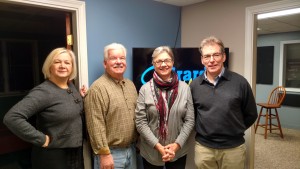 We were joined this morning by Special Guest Hosts Eva Castillo-Turgeon of the Ins and Outs of Immigration and Hon. Patrick Long.  They introduced Peter Cooke and Sue Corby, who are part of the Immigration Integration Initiative.  They told us about what we can learn from other cultures and heard about the importance of forming relationships.  We heard about goal groups and some strategies from the Economic Development Plan within the initiative.  They also spoke about the entrepreneurial nature of immigrants.

(Hour 1b) We continued with Peter Cooke and Sue Corby.  We started the segment by hearing about the structure and the time frame of their organization.  They told us about the network meetings that take place on a quarterly basis and welcomed their listeners to get involve.  We heard about the attitude, values and the impact of immigrants.

(Hour 1c) We heard about the impact of immigration within other areas in the nation.  They told us about the youth and we took a call from Harriet, who cleared up a point about regional issues.  She informed us of some of the history that affected the job market and she told of her frustrations in zoning issues.  We talked about integration and institutional discrimination.

(Hour 2a) We started the second hour by talking about what it takes for immigrants to assimilate and become successful in the United States and the differences within different generations.  We heard about Different Routes, Common Dreams and they talked about the Refugee Resettlement Program.  They also talked about the vetting process.

(Hour 2b) We started by talking about the Resettlement Program and the vetting process.  They pointed out the fear in the country around integration and Peter told us how he handles his fear.  Eva warned us against giving into fear and we heard about the Organization for Refugee and Immigrant Success (ORIS).  She also pointed out the state of political correctness in our culture.