On Friday, the General Court’s Joint Fiscal Committee accepted two hundred million dollars in federal funds as part of the Transportation Infrastructure Finance and Innovation Act (TIFIA) loan program.  According to a statement released by Senate President Chuck Morse, Republican from Salem, the loan will save the state twenty million dollars in comparison to typical project funding.  Morse said, quote:

“Accepting $200 million in TIFIA funds as part of a federal loan program allows New Hampshire to leverage highway funds to not only finish the I-93 expansion from Salem all the way to Manchester, but will also support paving an additional 1,200 miles of state roads and repair or replace 23 additional red list bridges.” 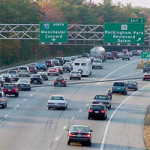 Morse complained that widening ninety three has taken too long, but said the project should be completed with these funds.  Morse seems to think widening the road will make quote  “…New Hampshire an attractive place to start and grow business, while encouraging tourism in our state.”  Not so sure making it easier for people to commute will entice companies north of the Massachusetts border, but hey, it sounds good.

MSD: Budget to be discussed tonight

The Manchester Board of School Committee will meet at seven o’clock in City Hall tonight to discuss the fiscal 2 0 1 7 budget.  That ought to be fun.  Thanks to a last minute addition to the agenda, the board will also discuss obtaining an Emergency Management Performance Grant to put surveillance cameras in several schools.  The twenty four thousand dollar grant requires matching funds from the receiving communities.  Approval of the grant and board action allocating the funds is required before the grant will be awarded.

Prior to the board meeting, the Subcommittee on Finance will meet at 5:30.  The committee is expected to take up the contract for special education busing services and will get the details of a projected eight hundred fifty thousand dollar shortfall in health insurance savings projected as a result of the contract granted to the Manchester Education Association last September.  The news on that thing just keeps going from bad to worse, doesn’t it?

On May second, the Board of Mayor and Aldermen has scheduled a special meeting to discuss the school district’s budget.  So, there’s more budget fun on the horizon.

The traffic gate at the bottom of Gold Street in South Manchester will be lowered permanently today in preparation for the opening of the new Super Walmart.  The new store’s opening ceremonies will be held this Wednesday, April 20th at 7:30 in the morning.  Residents who live on the opposite side of the gate have expressed concerns on social media that the gate adds five to ten minutes to their drive to get to South Willow Street.

Although there was concern that Gold Street would receive too much traffic from Walmart’s opening, the easiest way for many to get around the gate is to go through a residential neighborhood down the street on President Road.  Ward 9 Alderman Barbara Shaw has spoken at the last few meetings of the Board of Mayor and Aldermen about residents unhappy with the new lights and gate installed to prevent surrounding neighborhoods from being inundated with Walmart traffic.  Residents are free to air their concerns during the public participation meeting of the board tomorrow night at seven in City Hall.

The state Senate Public and Municipal Affairs Committee has scheduled a hearing on a House Bill 1 3 9 5 for this Wednesday morning at 9:15. The bill would allow electronic portable document format files to be used to store long term records.  The hearing will be in room 1 0 2 of the Legislative Office Building, which is directly behind the State House.

Advocacy group Right To Know New Hampshire supports the bill but would like it amended to encourage using textual P D F files that can be easily searched and copied instead of using images.  R T K N H is asking those who support this bill to come to the hearing or email the committee.  We’ve linked to contact information including all the members of the committee from this news read at Girard at Large dot com.

Just so you know, senators from our listening area include committee Chair Regina Birdsell, of Hampstead and Vice-Chair David Boutin of Hooksett.  The rest of its members include senators Nancy Stiles from Hampton, Betty Lasky from Nashua and Molly Kelly from Harrisville.

The Alzheimer’s Association of Massachusetts and New Hampshire is holding a free workshop on the ten warning signs of Alzheimer’s Disease on Thursday, May 12th at the Manchester City Library.  The workshop is scheduled from three to four and is open to public.  It’s designed to help attendees determine if and when it’s important to speak to your doctor and get a diagnosis for yourself or someone you care about who may have Alzheimer’s.  To reserve a seat or for more information call 8 0 0 2 7 2 3 9 0 0 or visit a l z dot org slash M A N H.

Hooksett Police Chief Peter Bartlett has joined the Twitter-sphere!  You can now follow his tweets @ChiefBartlett.  Welcome to the electronic jungle, chief!