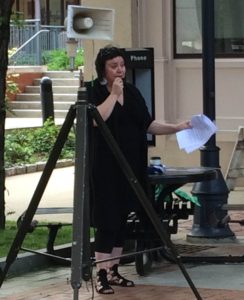 Protesters gathered in front of Manchester City Hall last evening to voice their concerns over the lock down of the West Side on Friday, May thirteenth, following the shooting of two on duty police officers.  West Side resident Carla Gericke used Facebook to organize concerned West Side residents who felt their rights had been infringed upon by the police department, which they say illegally detained people in their homes against their will.  Protesters held signs with messages saying “stop police state” and “Manchester united against martial law,” among others. 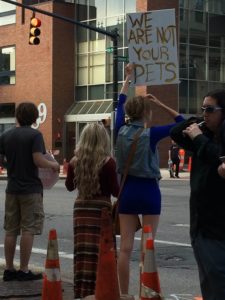 During her speech to several dozen protesters on City Hall Plaza, Gericke said that protesters want more information about the incident.  They want to know how much the event cost and who is paying for it.  They want an explanation of the five hour delay between the time that the police brought the suspect into custody and the time they lifted the lock down order.  Protesters also demanded that lock downs be regarded as voluntary and not mandatory.  Said Gericke quote: “citizens should not be treated as criminals and should be allowed to move around freely and go about their lives.”  Protesters also argued that the police had no right to exercise martial law unless declared by the governor, which did not happen in this situation. 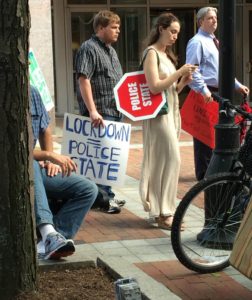 In response to these concerns, which were added to by about half a dozen West Side residents who shared their disquieting experiences from that day during the Board of Mayor and Aldermen’s public participation session last night, the aldermen took a unanimous vote of confidence in the Manchester Police Department.  There was little discussion on the motion made by Ward Six Alderman Nick Pappas.  Citizen requests for an audit of the event and a report that answers their questions and concerns were not discussed.  Police Chief Nick Willard was present for the meeting, but was not asked to address the issues raised.

To read the public comments made by the aggrieved citizens, visit our live blog of the meeting on Girard at Large dot com, which we’ve linked to from this news read for your convenience.

In other business last night, the aldermen approved the proposal of Elderly Services Director Gail Senno to charge seniors who live outside the city  a fee to use the city’s Senior Center.  Non-resident seniors will now pay a twenty five dollar per person, or forty five dollar per couple annual fee to access the facility.  The money raised will go to support center programs.  Senno assured aldermen that she would accommodate any hardship cases, of which she said there had been none brought to her attention.  At-Large Alderman Dan O’Neil opposed the move.

The aldermen also approved a request from the developer of Demetria’s Crossing, a low income housing development on Karatzas Ave. built with taxpayer funds, to amend the deed on the property conveyed to the city in two-thousand and seven to waive the requirement that it be low income housing.  Ward Five Alderman Tony Sapienza opposed the move, arguing that waiving the low income requirement, which were necessary for the project’s funding, does not help low income families.  The owners asked for this change saying it would make the condo units, priced at one hundred seventy thousand dollars, easier to sell. 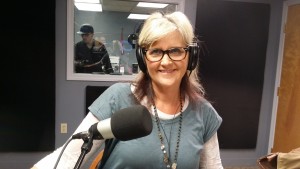 Amber’s Place will receive an infusion of cash, thanks to the aldermen, who voted to take one hundred thousand dollars out of the city’s contingency fund to support its operation.  The privately funded residential refuge shelters medically cleared addicts awaiting placement in treatment and recovery facilities.  It was in danger of running out of money given the demand on its services, which has escalated in light of the city’s Safe Stations program.  Mayor Ted Gatsas said the commitment of city funds would lead to about another quarter of a million dollars in private sector donations.

The aldermen committed almost one point one million dollars to fix issues at Fisher Cats Stadium, which it owns.  In exchange, the city received a guarantee that the ball club will pony up nine million dollars to pay off the bonds issued to build the stadium if it leaves before twenty twenty eight.

They also voted to send a letter to the General Court in support of the Granite Hammer program.  Legislative leaders will try again to pass the bill which failed by one vote after Republican leaders attached an amendment that affected health insurance premium payments made by retirees in the New Hampshire State Retirement System.

Finally, the aldermen directed the city’s Commissioner of Welfare to do everything possible to help the families that were displaced by the fire on Wilson Street.  Ward Seven Alderman Bill Shea, who represents the affected neighborhood, announced he will host a meeting tonight starting at six thirty to discuss what happened and how people can help the victims.  Shea said that he hopes people affected by the fire and people in Ward Seven can come to the meeting, which we believe will be held at the Sommerville Street Fire Station.

Nyquist: Once more unto the breach

“collaborative, cooperative, and common sense approach of our community…(to)preserve our New Hampshire way of life.”

He said keeping the economy moving forward, advancing public education, preserving abortion rights and comprehensively addressing the opioid crisis were his focus.  He has twice lost campaigns to Sanborn.