Parents, teachers and even medically licensed professionals have all been sounding the alarms on the kind of data collected on students and the kind of standardized assessments students take each year.

Achievement tests measure academic knowledge, standardized assessments assess a child’s attitudes, values and beliefs.  This kind of transformation in public education has created an uproar among parents across the country and forced parents to refuse to let their children fill out surveys or take the standardized assessments.  In New Hampshire, public schools administer the Smarter Balanced Assessment, PACE Assessments and the SAT in high school.  All three align to Common Core and all three are proving to be controversial too.

Parents are wise to be concerned about the surveys and assessments given to their children in school. In the federal law recently signed by President Obama replacing No Child Left Behind, there is a provision that defines the kind of assessments schools must use.

ESSA (Every Student Succeeds Act) requires assessments to be developed to the extent practicable using the principles of universal design for learning. (UDL) That is a significant restriction on the kinds of tests schools can use. 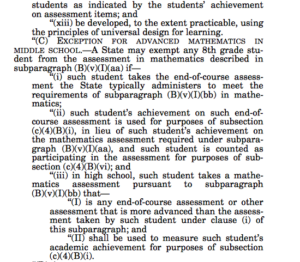 Higher-order thinking skills have little to do with factual academic knowledge. These assessments will measure, in a subjective way, skills such as critical, logical, reflective, metacognitive, and creative thinking. These are now embedded in computerized programs that map and analyze a child’s brain function.

This means they will be measuring a student’s non-cognitive dispositions, attributes and mindsets. The focus on academic knowledge becomes secondary to these so-called higher order-thinking skills.
http://childrenthinkingskills.blogspot.com/p/high-order-of-thinking-skills.html

While some of these non-academic skills may be useful, measuring them on a standardized assessment is taking “testing” in a radical and controversial direction.

In other words, if local schools in New Hampshire were to choose a standardized test that didn’t meet the approval of the Secretary of Education, our federal funding could be at risk.

ESSA was “sold” as a way of returning power to the states, however, you can see how that is  contradicted by the unprecedented power given to the U.S. Secretary to withhold funding:

From the Memorandum of Understanding State’s sign with the Smarter Balanced Assessment Consortium (SBAC) you can see that UDL will be part of the assessment:

The new and controversial PACE assessments will measure your child’s “dispositions.”  This after your elected representatives on the New Hampshire House Education Committee (HEC) agreed measuring dispositions should NOT be assessed.  New Hampshire State Representatives on the HEC amended prior legislation that removed the word “dispositions” from legislation on assessments.  Yet as you can see from this document,New Hampshire Department of Education College and Career-Ready Accountability Options Performance Assessment of Competency Education (PACE) for Demonstrating Progress on page 2, number 1 & 2, that’s exactly what they are measuring with the new PACE assessments:

You can see from this facebook post that this is a priority for the NH DoE on Special Education: 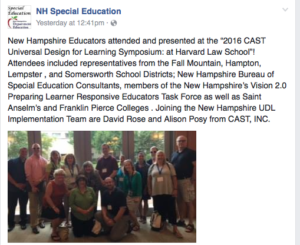 New Hampshire’s State Representatives, David Murotake who also sits on the Nashua School Board, testified that the Nashua teachers reported the Smarter Balanced Assessment was more like a psychological or sociological experiment, not as a measure of academic learning. Who created this test, anyway? It couldn’t have been by professional educators. The Nashua teachers were identifying the psychological component to standardized testing that has made it so controversial, parents are refusing to let their children take them.

Here is a parent in TX testifying before the Senate Education Committee exposing the shift from academic literacy to changing the next generation’s world view by reshaping a child’s attitudes, values and beliefs. She even consulted a Psychologist and reported the disturbing reaction in her testimony.

One of the new “Education” organizations in New Hampshire I criticized for promoting illiteracy and for pushing the dumbed down Federal education reforms, posted this on their blog recently:” … by designing assessments integrated with competency-based projects all year long, the four PACE districts, funded by the Nellie Mae foundation, are figuring out how that would work.

The Nellie Mae Foundation, funded by the Gates Foundation, and the Federal Government, push a radical political social justice agenda that includes teaching practices that lower literacy rates.  Is this what we want for NH students?

Organizations like Reaching Higher NH are here to push federal education reforms but parents need to be aware that all this does is, promote illiteracy.  There is limited time in the classroom and if a teacher has to shift from teaching academics to dumbed down “competencies,” it’s our children who will suffer.

Governor Hassan, Commissioner Barry, and the members of the New Hampshire Board of Education (some of whom are founders of Reaching Higher NH) are all responsible for the dumbing down of education in our local public schools.

The Common Core Standards and Competency Based Education and grading do not elevate our public schools.  That’s been proven over and over again.

Parents have, by state law, the right to review these assessments but more importantly, they need to start speaking to their elected officials and tell them this is unacceptable.  This does not help their children nor does it help their public school.

Ann Marie Banfield began working as Cornerstone’s Education Liaison in 2009. As an education activist, she took her decade long research on education to Concord. Working with experts in education from across the country, she offers valuable insight into problems and successes in education. She holds a B.A. in Business Management from Franklin University in Columbus Ohio. Ann Marie and her husband have three children and reside in Bedford, NH.