The problem with Jeanie Forrester, candidate for governor in New Hampshire, may be her support for the Obama education reforms.

It’s hard to find Senator Forrester’s positions on education policy, however I received a flyer from “Save the Children Action Fund” endorsing Sen. Forrester for Governor. The flyer indicates she supports “School to Work” and “Early Childhood Education.”

I already addressed the problem with her support for early childhood education and how this is part of President Obama’s political agenda. It’s been part of the federal reform in education that includes the dumbed down Common Core Standards.

If you look at organizations pushing for early childhood education, you begin to see what’s really at stake here. This isn’t about helping your young children, this is about the State seeing your child as “human capital.” That’s what a workforce development education model does to our children. Instead of children being unique individuals to educate, the workforce model reduces children down to what “human capital” can do for the State.

The NH Department of Education even highlights the need for human capital: 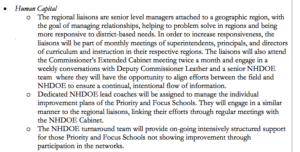 This is how the feds control the classrooms for the development of human capital.  You will notice no where do they consider engaging parents or supporting local control.

The Obama education reform isn’t about reforming k-12 for literacy or academic excellence.  This is a shift away from academics to dumbed down workforce training through Competency Based Education.

Why is Sen. Jeanie Forrester promoting Obama education fads instead of putting forth a policy agenda that focuses on less federal intrusion into our classrooms?

Many Republicans have fallen victim to these education fads because they do not realize these fads have failed children in the past. The flyer from the Save the Foundation Org. highlights Sen. Forrester’s support for “School to Work.” This is another failed fad from the past. Whether they call it, Outcome Based Ed., School to Work, or Competency Based Ed., the goal is to change public schools from a liberal arts model to a dumbed down workforce model.

This 1997 article, What’s Wrong with School-to-Work, the author highlights the problems with “School to Work.”  This is when education fads were dominating public education.  Instead of learning from those mistakes, education reformers resurrect them under new names.  In New Hampshire we call it Competency Based Education.  Sen. Forrester used the old term, School-to-Work, but if you read through the article, you will see the same criticisms that exist today.

Public education isn’t just about workforce training, it’s about educating the child for literacy and academic excellence. The public schools have a long way to go, but further diluting literacy by supporting the dumbed down workforce model doesn’t help them either. New Hampshire has been following this dumbed down model for several years so you might want to ask, where has this led us?

I took this question directly to Heather Gage, Chief of Staff for the New Hampshire Department of Education.  Where is the proof that this workforce model has improved literacy in the New Hampshire schools?
Below you can read her answer: 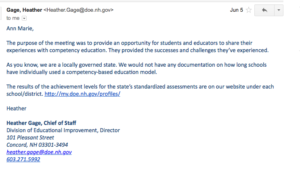 As you can see, years later, they don’t have any proof this has helped New Hampshire’s children academically.

When a principal from Lisbon, NH praised Competency Based Education, I asked him for proof.
Below you can read his answer: 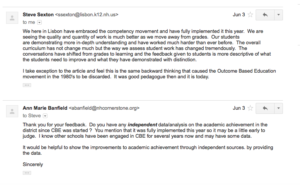 Again, there’s a lot of praise for this shift away from academics, but what has that actually brought our students?

Voters have a choice to make in a few weeks.  Who will Republicans support for Governor?  We know the Democrats are committed to the federal reforms but the Republicans are taking a stand against Common Core.  Candidates need to do more than give lip service to opposing Common Core.  This education reform goes way beyond a set of dumbed down standards.  This is a paradigm shift towards dumbed down workforce training too.

The question they need to ask from Senator Forrester is, why do you campaign against Common Core in debates, but then your literature praises your support for Obama education reforms ?