Sununu: Calls for cancellation and re-bid of contract

In recent news reports we have learned troubling new facts surrounding the state contract awarded to Dartmouth-Hitchcock. These new revelations suggest the possibility of collusion between state officials and hospital executives and inappropriate communication between those parties leading up to the bidding process, which could present a clear conflict of interest. I have always believed that my role on the Executive Council is to ensure that state contracts are awarded fairly, transparently and impartially.

The health and well-being of our citizens is too important to continue allowing partisan politics to stand in the way of what’s best for the people of our state.  Colin Van Ostern should stop taking marching orders from Governor Hassan and do what’s right for New Hampshire by supporting an immediate re-bid of the contract with Dartmouth-Hitchcock. Biundo: Time for a change

The Trump for President campaign laid out a warm welcome for Slick Willie as the former President campaigned around the state yesterday.  In a statement released by the campaign, Trump Senior Advisor, Manchester’s own Mike Biundo said, quote:

Bill Clinton’s visit to New Hampshire reminds Granite Staters that pay-to-play politics would once again be alive and well in a Clinton presidency. Whether it’s today’s revelation of a quid pro quo within the State Department, or backroom meetings with the Clinton Foundation’s foreign donors, or helping ‘friends of Bill’ obtain preferential treatment during Haiti’s 2010 earthquake relief, those who pay Bill’s speaking fees or donate to the Clintons will always come before those who have not.  The Clintons are a disgrace and they should not be allowed to move back into the White House with their long caravan of ethical baggage — it’s time for change.

The Trump campaign also announced Red Sox pitching great Curt Schilling will be meeting with volunteers at Donald Trump’s Victory Offices today in the Granite State.  Schilling will pump up the faithful in stops at the Nashua Victory Office at 11 Main St at four o’clock, then he’s at Trump’s Salem Office at 3 0 3 South Broadway at five fifteen.  Following that, he’ll be at the Trump office in Stratham (note to the people in WindHAM, it’s not StratHAM, it’s “Stratum,” just like it’s “Windum!”) at 62 Portsmouth Ave at six fifteen.  So, if you’re a Trump volunteer, you just might catch an autograph and a selfie from a soon to be Hall of Famer!

The Manchester Fire Department has released the latest stats on the opioid epidemic in the city.  While September of this year showed a dramatic decrease in the number of overdoses versus September of last year, things seem to be on the uptick in October.  Last October, there were a total of fifty five overdoses with eight fatalities.  So far this October, there have been forty two overdoses with four fatalities.  In releasing the stats, Emergency Serviced Director Christopher Hickey addressed the uptick saying, quote:

“One thing that I find to be troubling is that routinely this month it has been documented through firsthand accounts that those we revive are reporting having used Fentanyl.  This, to me, means that they are seeking it out now instead of being ‘caught off guard’ by the potent drug.  When this shift happens, we are naturally going to see an increase in overdoses despite our best efforts as it will take less of the drug than normal for users to overdose on.

Hickey also released updated numbers on the city’s Safe Stations program.  Since launching on May 4th, six hundred and sixteen people from eight two New Hampshire communities and four states, including Maine, Massachusetts, Connecticut and Alabama have gone to a Manchester fire station seeking help with their addiction.  One hundred fifteen of them were repeat visitors.  One hundred seventeen had been treated for an overdose before walking into a station.  Two hundred fifty three, or just forty one percent, were Manchester residents.  Thirty Nashuans came through the program as did ten residents from Concord, Derry, and Hooksett.

…really do feel like Safe Station and Granite Hammer are finally starting to show some results and the overdoses they respond to, in their eyes and minds, appear to be going down.  In essence this is true.  As with everything unpredictable, in this effort it all remains to be seen.

The 30th annual Derry Holiday Parade will step off at 1 o’clock on Saturday, Nov. 28th.  This year’s theme is “The Magic of the Holidays.”  Attracting nearly 10,000 spectators, the Derry Holiday Parade is one of the largest in southern New Hampshire and features the sights and sounds of more than 80 festive floats, marching bands, comical clowns, and costumed characters.  Participation in the parade is free for area businesses and community nonprofits and other organizations. Groups looking to enter a float, marching unit, or other entry into the parade must complete an online registration form and an online organization biography form by Friday, Nov. 11. The forms can be found at g d l chamber dot org slash parade, where potential parade sponsors can find all they need to help organizers offset the event’s cost in exchange for promotional consideration. 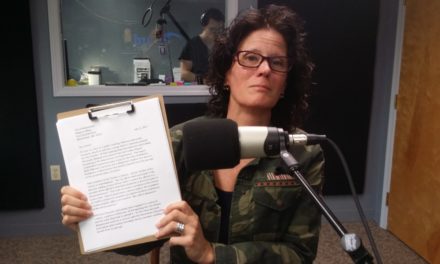