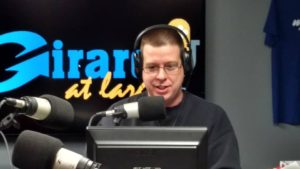 Rich spoke about the controversy surrounding the White House’s alleged media ban.  He shared about a Union Leader article that was published at his expense when he ran for Mayor of Manchester.  He then informed the listeners about a recent press conference with President Donald Trump and shared about fake news.  Finally, he took a call from Susan in Milford, who reminded Rich about a similar issue that happened within the Democratic Party.