It was a long night for the Manchester Board of School Committee last night.  For some, the haul started at five thirty with a meeting of the Committee on Buildings and Sites and ended just before midnight as the board concluded its business.  The board tackled whether or not phone polls should be used to request support or opposition to pending legislation, tabled an action changing the district’s health insurance policy to pay for transgendered sex change surgeries and treatments and sent a letter to the Board of Mayor and Aldermen saying they opposed the proposed charter amendment that would once again make the district a department of the city.

MST quad gets his name

There was also protracted and unfortunate discussion over what to do with Mayor Ted Gatsas’ suggestion that the Manchester School of Technology be named after former superintendent, the late Dr. Tom Brennan, while his widow Wendy and three of his daughters looked on.  Before the meeting started, Brennan’s daughter Jenny, thanked the mayor for his proposal and the board for its consideration, saying whichever option it chose, they would be grateful.  The debate wasn’t what one would have hoped for as Brennan’s family members often cried during the deliberations.  Ultimately, the divided board defeated the recommendation of the naming committee to rename the four year high school program Brennan Academy at M S T, choosing instead to name the quad area after him.  At-Large member Rich Girard, who supported naming the four year program after Brennan, moved to make the naming of the quad after him unanimous, which was done.

The board also discussed the redistricting recommendations brought forward by Superintendent Dr. Bolgen Vargas.  They will go to a public hearing tonight before the Special Committee on Redistricting at Southside, which starts at six thirty.  From there, they will come back to the board for a vote at a special meeting on April nineteenth.

Also approved after a protracted debate was a request by Southern New Hampshire Services, in conjunction with the Washington D C based political action committee Save the Children Action Network, which spent almost one hundred thousand dollars on school board and aldermanic races last year, to open a Head Start classroom at one of the city’s West Side schools, presumably West.

Before the meeting, the Coordination Committee took up the district’s so called smart snack policy, and made a policy that was already ridiculous flat out bad, by requiring parents to opt in to so called non-compliant bake sales.

Yes, folks, we have lots to discuss.

The School District Governance Association has announced it will host a workshop to help the public and school officials understand how state law requires districts to develop budgets.  The timing for such an event is good, given that across the state, budget committees and school boards are reorganizing with their newly-elected members to begin work on the next year’s round of school budgets.

Former Senate President Peter Bragdon will keynote the event.  In addition to his senate service, Bragdon served many years on the Milford School Board.  He left the senate to become the Executive Director of the Health Trust, enabling him to provide valuable insight on benefit questions and issues.  The workshops will also explore how a structured planning process can move the initiative for budget decisions to the elected bodies where it legally belongs.  It will be held on Saturday, April twenty second from eight thirty to twelve thirty at the Nackey S. Loeb School of Communications in Manchester.  Registration is ten bucks for S D G A members and fifteen bucks for guests, who are asked to register in advance with Arthur Green at a z green @ comcast dot net.  For more information about the organization and the event, visit s d g a n h dot org.

The Bedford Police Department is investigating an overnight burglary that occurred at the T D Bank on South River Road.  Police were called to the scene at about twenty minutes to eight yesterday morning.   Upon arrival, officers determined that there had been a break-in at the bank sometime after closing hours on Sunday and an unknown quantity of cash had been taken.  If anyone has any information on this incident, or saw anything out of the ordinary in the area on Sunday, they are asked to contact the Bedford Police Department at 4 7 2 5 1 1 3. 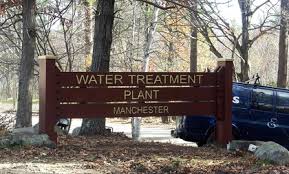 The city of Manchester Water Works has contracted with N. Granese & Sons to clean and line water mains on Maple and Ash streets between Webster and Blodget.  The work started yesterday and is expected to take approximately two months to complete.  Effected customers will be put on a water main bypass to minimize disruptions to service.   If you have any questions or concerns about this water main improvement project , you’re asked to call Mike Adams at 6 2 4 6 4 9 4. 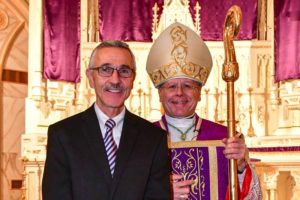 Paradis is employed as a Radiation Oncology Nurse at the Elliott Hospital in Manchester.  He previously worked at Saint Joseph Hospital in Nashua in the Medical Surgical Unit, and prior to his graduation from the Nursing program at Saint Anselm College worked as a Nursing Assistant at Bishop Peterson House, a health care facility for retired priests.  He worked in banking for 19 years before returning to school to earn a degree in Nursing.

Paradis and his wife Denise reside in Goffstown, and are communicants of the Parish of the Transfiguration in Manchester, where he serves on many committees including the Adult Faith Formation Committee and the Food Pantry Committee.  He also volunteers at New Horizons.  We’ve linked to the Guild’s Web site in case you’re interested in more info.

That’s NEWS from our own backyard, Girard at Large hour ___ is next.