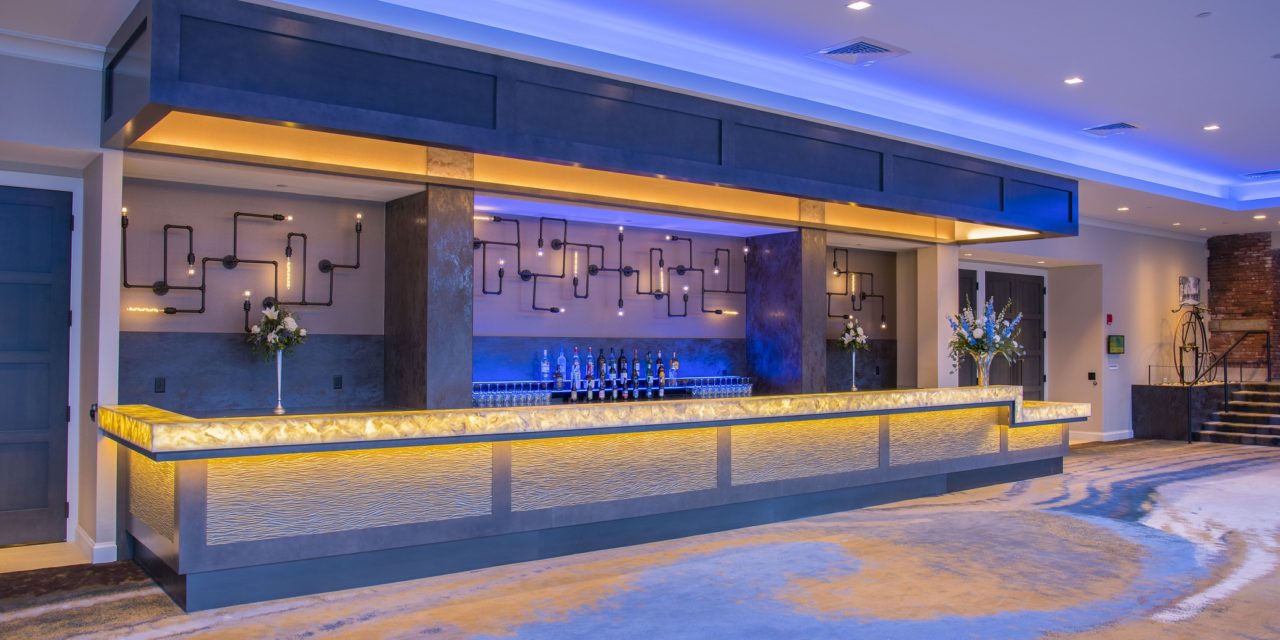 The transformation began in 2009, with the replacement of every window in the hotel.  Since then, JPA Management has renovated rooms, bathrooms, and hallways throughout the facility, along with the recent ballroom redesign. New rooms, including 12th floor Manhattan-style suites, include special features, such as iPhone docking stations, ultra-high-definition televisions, wet bars, laptop safes, and robes and slippers. JPA Management worked with the Bedford-based architecture firm, Stibler Associates, to produce the design plan.

As part of the project, JPA Management performed strategic improvements to conference and meeting space, installing state-of-the-art teleconferencing capabilities and writable walls designed for collaborating in its Coolidge executive-style boardroom. Renovations also include local touches, including a partnership with the New Hampshire Institute of Art, which is providing artwork throughout the hotel for display. In addition, the Radisson Hotel Manchester, which features an outdoor pool deck and bar, as well as a full-service spa, “The Spa Within,” opened a coffee shop this month called the Daily Brew, which proudly serves Starbucks coffee.

JPA Management has plans for more enhancements, including renovating the lobby and mezzanine, along with installing new mattresses, furniture and window treatments in all guest rooms.

In 1983, JPA Management built the Radisson Hotel Manchester on the site of the original New Hampshire State Armory, which was constructed in 1904. In renovating the Radisson, JPA, together with Radisson staff, made it a point of emphasis to embrace the city and the building’s remarkable history.

A newly redesigned “Four Rivers Ballroom” pays tribute to local rivers that played a significant role in shaping New Hampshire’s history and economy, particularly during the Industrial Revolution. The ballroom can now be divided into four sections: Merrimack, Contoocook, Piscataquog and Pemigewasset. New carpeting designed to represent a river running over stones was also installed. JPA invested $1.4 million in renovating the ballroom, which is marked by its industrial flare, including encased columns, new furniture, and copper fixtures.

Further, the Radisson Hotel Manchester is collaborating with the Manchester Historic Association, which will provide historic artifacts, including a historic bicycle, for display on a rotating basis.

“In planning and executing renovations, it was critical to embrace the community, which has embraced us for the past 33 years,” said Kim Roy, general manager of the Radisson Hotel Manchester and one of several employees who have worked at the hotel for more than 20 years. “Highlighted by our Four Fivers Ballroom and our partnerships with the Manchester Historic Association and the New Hampshire Institute of Art, the artwork, décor and design we have chosen honors the rich history of Manchester, and also reinforces the Radisson Hotel Manchester’s appreciation for and connection to our city.”

On a scale unlike any other hotel or function space in New Hampshire, the Radisson Hotel Manchester plays host to thousands of event-days each year. Events include nonprofit functions, local and regional business and trade organization events, weddings and proms, and political events, including functions for candidates in New Hampshire’s First-in-the-Nation Presidential Primary. Since January 2017, the Radisson Hotel Manchester has hosted 1,200 attendees at the Easterseals New Hampshire Winter Wine Spectacular, a Gun Show, a reptile expo, the Made in NH Expo, a major shoe show and New Hampshire Food Bank’s Steel Chef Challenge with celebrity Chef Robert Irvine, attended by 700 people.  Area businesses, such as Newforma, Texas Instruments, Citizens Bank, Southern New Hampshire University and area hospitals, also rely on the Radisson for corporate functions and meetings.

The Radisson’s coordination and execution of events has not been lost on celebrity guests and hosts.

“It has been a pleasure to work with the extremely professional staff at the Radisson Hotel Manchester and have them sponsor the Steel Chef Challenge,” said Food Network celebrity chef Robert Irvine, who recently hosted the Steel Chef Challenge at the hotel. “Their recent renovations make this an amazing venue and any group would do well using the space for an event.”

The industry has taken notice as well, as the Radisson Hotel Manchester was awarded the 2016 Presidents award from Carlson Companies for outstanding achievement in guest service and property performance—the fifth year in a row the Radisson has received the honor.

As part of the overall renovation project, Executive Chef Rob Clough, who joined the Radisson four years ago after holding several senior level culinary positions throughout New England, has made a series of improvements aimed at delivering delicious cuisine during functions of all sizes. Along with changes to cooking techniques and procedures, Clough chooses local products whenever possible, including charcuterie, cheeses and greens.

“People should expect high-quality dishes,” said Clough, a Tilton native, and former sous chef at the Wentworth by the Sea in Rye. “We can prepare a perfectly cooked surf and turf for 650 people, a delicious duck flambé for a more intimate gathering of about 100 guests or prepare a juicy roast chicken dinner for a nonprofit event with more than 1,000 attendees.”

“The sheer magnitude of the events we host each year truly make the Radisson Hotel Manchester a unique resource in Manchester, drawing thousands of people downtown throughout the year,” said Roy, who was recently awarded the 2016 Outstanding Women in Business Award from New Hampshire Business Magazine. “We are pleased to have joined hands with so many local partners for this project and we are excited to share it with the local community.”

Caption: The Radisson Hotel Manchester recently completed a 10-year, $2.2 million long-term renovation project, which was highlighted by a redesigned and refinished ballroom and function space. Along with renovations to the ballroom, the Radisson Hotel Manchester has implemented high-tech upgrades, enhanced culinary capabilities, and a renovated 12th floor to feature Manhattan-style, luxury suites. Pictured here, is the redesigned Four Rivers Ballroom set up for an event. Photo by John Gauvin, Studio One Manchester.