The Growing Threat of North Korea 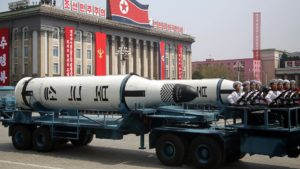 Rich talked to the listeners about the threat that North Korea is presenting itself to be on a global scale.  He spoke about President Donald Trump’s handling of the situation, making comparisons to President Ronald Reagan, and discussed China’s stance on the issue.  He then took a call from Eric in Manchester, who speculated about North Korean intentions.  Tune in to hear more!