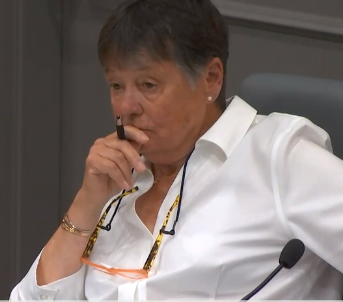 The leak of confidential personnel information by at-Large Manchester Board of School Committeewoman Nancy Tessier has gone beyond the school board and the personnel members she copied in her email regarding the content of a non-public meeting on September 11, 2017.  The breach has been the subject of editorials written by at-Large Committeeman and Girard at Large Radio Show Host Rich Girard and Coalition of NH Taxpayers Chairman Ed Naile and a complaint that’s been filed under the city’s charter.  Girard has also discussed it extensively on his radio show.

Now, thanks to a letter to the editor published in the Union Leader, questions have been raised about how far and wide Tessier’s email has circulated.  Additional questions have been raised over the source of the leak to the author of the letter, Mary Heath.  Did Tessier leak the contents of the letter to her long time friend Heath, a former employee of both the Manchester School District and New Hampshire Department of Education?  Did one of the individuals copied on Tessier’s violative email?  Was it someone else?

Here’s the paragraph penned by Heath that proves Tessier’s breach of confidentiality went beyond the board and copied employees:

As the current board chair, Mayor Gatsas remains silent on how the board functions. When school board member Nancy Tessier wrote a letter of concern, fellow board member Richard Girard publicly chastised her. She addressed legitimate issues regarding the work and function of the board.

As a member of the school board, I cannot and will not say what Tessier’s email addressed.  It was a personnel matter and her email was added to the non-public minutes, which were sealed.  That said, in word and writing, I have “publicly chastised” Tessier for violating the law.  The question remains, without validating the information Heath presented, how would she know Tessier “addressed legitimate issues regarding the work and function of the board” had she not seen or were she not told about the content of Tessier’s email?

Reputations are often at stake in personnel matters and their illegal disclosure puts the school district at legal risk.  If people like Mary Heath can write letters to the local newspaper that demonstrate knowledge of the confidential information leaked (again, I am not verifying it’s content, just asking how would she otherwise know that), then the board has an obligation to determine how far and wide this information has gone and who, if anyone other than Tessier, helped it get there, especially in light of its decision to keep secret the explicit findings of the attorney’s investigation and its vote to “receive and file” the matter.

The No Child Left Behind Waiver; Is It Worth It?