Weaver on Importance of Laws Keeping Up With Technology

(Hour 1b, c) John Weaver is an attorney with the McLane, Graf, Raulerson & Middleton Law Firm.  He has penned a book called “Robots Are People Too” about our fast changing technology and the need for our laws to keep up.

Weaver explained how self-driving cars, drones and other aspects of artificial intelligence might shape our laws in NH and the laws that govern us.

Weaver discussed drones and the privacy concerns that accompany them.  What sort of impact will this very inexpensive technology have on our lives?  What are some of the current laws about drones?  How will drones impact police surveillance and Big Brother watching us?

Weaver talked about some of the legal precedents being set today, so we don’t have to fear a Robot Apocalypse tomorrow.

Robots Are People, Too on Facebook     Buy it on Amazon

Here’s some additional information on Weaver and his book:

NEW BOOK, ROBOTS ARE PEOPLE TOO, EXPLORES HOW SIRI, GOOGLE CAR, AND RISE OF ARTIFICIAL INTELLIGENCE WILL FORCE US TO CHANGE OUR LAWS

PORTSMOUTH, NH  February 12, 2014 – As artificial intelligence becomes more prevalent in our society, from Siri to driverless cars and autonomous drones, how will our legal system address the consequences of decisions that are not being made by human beings? In his groundbreaking new book, Robots Are People Too(Praeger, November 2013), attorney and writer John Frank Weaver explores the wide-ranging legal implications of the rise of artificial intelligence and how law and public policy need to adapt to meet these challenges.

Peter W. Singer, the director of the Brookings Institute’s Center for 21st Century Security and Intelligence whose books include Wired for War: The Robotics Revolution and Conflict in the 21st Century, says: “The questions raised by robots’ rise will seem like they are from science fiction, but they are becoming all too real. In Robots Are People Too, John Frank Weaver tackles the legal side of this fascinating new story, from what happens when driverless cars get into an accident to fundamental questions that are being raised for the Constitution itself.”

“Almost all of our laws rely on the assumption that only people make decisions. Increasingly, that won’t be true,” says Weaver. “We will have cars that drive themselves, programs that don’t need human input to write new content, and drones that can fly – and do other, more worrisome things – without any person directly controlling them. Right now, our laws don’t properly govern these advances in artificial intelligence and autonomous technology, and it’s important that we put legal structures in place that will answer the questions we’ll see. What is the status of an autonomous drone under international humanitarian law? Can an autonomous police drone violate a suspect’s 4th Amendment rights while following him? Who owns new intellectual property created by software?”

Over the next decade our laws will have to anticipate these questions, and Robots Are People Too explores the issues that AI will force us to confront and advise revisions to our laws to successfully incorporate AI into our legal system.

“What happens to laws that govern the choices humans make when humans no longer make those choices? Robots are People Too demonstrates that the answer to those questions have implications for our legal system both profound and vast, but not unprecedented,” says CEO of Cambridge-based start-up testive.com and MIT Sloan School of Management lecturer Miro Kazakoff. “Drawing from the lessons (and mistakes) as far back Industrial Revolution, John Frank Weaver provides a handbook for the challenges and potential solutions to a future that has already arrived.”

John Frank Weaver is a contributing writer at Slate, where he discusses legal questions surrounding artificial intelligence and current events. He has also appeared on Huffington Post Live to discuss the relationship between humans and artificially intelligent robots. He is an attorney with the New Hampshire law firm McLane, Graf, Raulerson & Middleton where he focuses on artificial intelligence, land use, real estate, commercial lending, telecommunications, and education law. He is a graduate of Georgetown University and earned his J.D. at Boston College Law School.

Weaver is available for interviews and as a commentator on the intersection of artificial intelligence and our legal system. 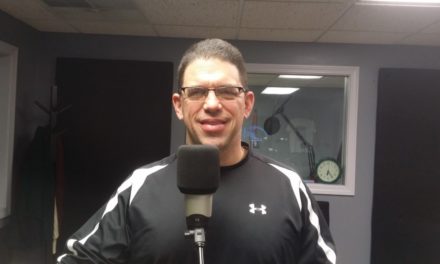 Fitness Effects: Why Muscle Is So Important

Power and Purpose Program and the Walk to End Alzheimer’s