Public Works officials in Manchester announced the details needed to implement a partial parking ban approved by the Board of Mayor and Aldermen at its meeting on Tuesday night.  Late yesterday afternoon, Public Works Director Kevin Sheppard announced that parking would be allowed only on the even side of city streets, with the exception of Pine, Chestnut, Elm, Bedford and Commercial streets, where parking will be allowed on both sides.  In addition, there is no overnight parking permitted on the circular portions of dead-end cul-de-sacs.  Those violating the order, this is a twenty four seven thing until further notice, by the way, should expect a $25 ticket to get dropped on their windshield.  This order suspends the city’s odd even winter parking rules.  We’ve published the department’s notice in its entirety and have linked to it from this newscast at Girard at Large dot com.

Are Manchester’s top school administrators playing favorites amongst the high schools?  At last week’s meeting of the Board of School Committee, Ward Nine Committeeman Arthur Beaudry raised the issue as it was discovered that the Central High boys basketball teams were allowed to play a scheduled game on Tuesday February third, despite schools being closed for a snow day.  District policy requires games and practices to be canceled on snow days.

In confronting Superintendent Debra Livingston on the question, Beaudry recounted how the Nashua High hockey team was sent packing before a scheduled game with Memorial because the district refused to allow the game to be played on a snow day and asked why the double standard.  Livingston said she gave the team permission to play because they asked, the roads were safe by that time and she wanted the kids to be able to play.  When Beaudry asked why other teams weren’t allowed to practice or play that day, Livingston said she was unaware of other games and would have allowed them to play if she’d known about them.

According to Beaudry, Memorial’s teams were unable to practice because of the snow day and he said if the administration was going to make exceptions for one team, it should notify and allow all teams the same exception.  Oh, and memo to the Superintendent, the basketball teams at West had games canceled, too and at least one of them won’t be made up.  I know you’ve got three high schools to keep track of, but next time you’re asked to break the rules for one, make sure you check into them all.  There are a lot of very unhappy West High parents who feel slighted.

The Hooksett School Board met this week and, well, it was one for the ages.  The board gave conditional approval to the contract extension approved by the Manchester Board of School Committee two weeks ago.  They want their attorney to take a look to make sure everything’s on the up and up.  Pro-Pinkerton School Board Member Mike Berry questioned why the board would adopt the contract given the clause Manchester included to reserve the right to negotiate capital costs in a long term agreement.  Board Member David Pearl put an end to that line of argument real quick saying the board also said it wouldn’t accept a contract with Pinkerton that had minimum student guarantees, so it shouldn’t be a problem.  To report on the rest of that discussion would probably make your ears bleed and my head explode, so we’re going to leave it alone for now.

La piece de resistance however, was Pearl’s attempts to get the board to say what it would do if the minimum number of students required to go to Pinkerton wasn’t met.  Saying quote “hope is not a plan,” Pearl proposed five options, all of which failed.  Berry said Pearl was simply trying to stoke fears in the voters before the March tenth elections where the ten year contract will be on the ballot.

Will the board support a lottery?  Nope, it went down in flames.

How about paying twice for the number of kids needed to meet the minimum?  Nope, that went down in flames.

Well then, shall we get rid of the M O U schools to ensure that the student body won’t be split among five school districts?  Nope, that went down in flames, too.

What did pass was a page long motion from quitting board member Todd Lizotte (literally, his motion was so long, we’ve asked both him and Superintendent Charles Littlefield for a copy), that was little more than a big rambling mess about not binding future boards and letting them come up with a plan that meets the future circumstances, etc…It was a bunch of drivel, frankly, that was designed to take the question off the table so that voters were left with the idea that it wasn’t for this board to even think of offering suggestions.

Board Vice Chair Amy Boilard said she’d have voted for Lizotte’s motion, which of course passed, if he weren’t quitting so he’d be around to do the work he’s saying a future board should do.  And, pro-Pinkerton Board Chair Joanne McHugh argued all night that the board shouldn’t be dealing with this issue because they don’t know what will happen.

Remedy for the Hooksett School Board?

Pearl pressed the point that the board was putting off the hard decisions specifically because pro-Pinkerton members wanted to avoid upsetting the public before the vote.  He questioned why they voted for the contract if there were so many unknown variables that would only be known in their time and they weren’t willing to be honest with voters about the possible repercussions.  He felt the board should at least say what they would do about it if faced with the scenario of coming up short on the minimums to inform the public about the likely remedies.  He made too much sense and lost every motion trying to give voters an idea of what they were in for, which in the end, may have given them all they needed to know before they voted. 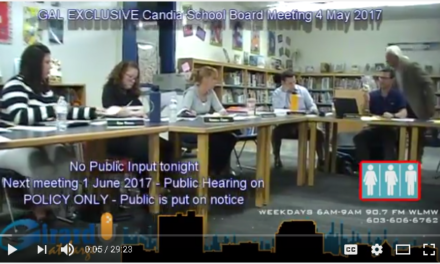