“Shall the Hooksett School District vote to approve a tuition agreement to be entered with the Manchester School District for the education of some of Hooksett’s high school students, which provides for a 10-year term beginning on July 1, 2019 and which contains no minimum commitment of the number of students to attend Manchester from Hooksett but allows all students from Hooksett to attend Manchester at a tuition to be charged that is equal to the tuition charged by Pinkerton Academy to Hooksett students during the term of the agreement; and further to authorize the School Board to take such other and further actions that are necessary to carry the tuition agreement into effect, including the adoption of minor amendments to the agreement from time-to-time during its term without further action by the School District meeting.”

That’s the warrant article question the Hooksett School Board voted unanimously to place on the ballot for the coming March election.  The Hooksett School Board convened a special meeting last night to consider a long term proposal offered by the Manchester Board of School Committee, which met in non-public session to develop a proposal on Monday in response to an offer from the Hooksett board.  It would seem that the tuition issue between Manchester and Hooksett is about to be put to bed.  Let’s hope.

In a somewhat related item, the Hooksett Budget Committee will meet tonight to finalize what budget warrants will be placed on the ballot as well.

The Manchester Planning Board voted to amend the city’s subdivision and site plan review regulations at its meeting last week.  These regulations apply to all subdivisions, lot-line adjustments, lot mergers, planned developments, changes of use to a nonresidential or multifamily building or site, and new construction or renovation of all nonresidential uses and multifamily uses.  The new regulations are located under the “Regulations” tab on the Planning and Community Development Department’s Web page, which we’ve linked to from this news read at Girard at Large dot com.

Because this is the first comprehensive amendment to these regulations since 2000 and numerous changes were made throughout the document, the department’s staff wants you to know they’re expecting your questions, so don’t hesitate to give them a call at 6 2 4 6 4 5 0 so they can be answered.  (Click here for our discussion with Planning Board Member Jim Roy about the changes and the process they went through.) 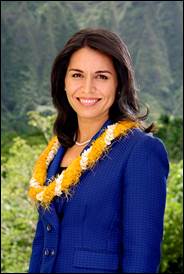 Gabbard:  Teams up with Guinta

Republican First District Congressman Frank Guinta joined with Democratic Congresswoman Tulsi Gabbard of Hawaii to introduce the Veterans Administration Bonus Elimination Act.  In a statement issued yesterday, the pair said the act would help to ensure timely care for veterans by denying bonuses to senior Veterans Administration executives who fail to provide and ensure, per V A guidelines, that veterans receive care within 30 days.  This bill arose from the concern that veterans in need of care are being hurt and, in all too many cases dying, before they are even able to receive any care.

In order to receive bonuses, VA executives would have to ensure that all vets were given care within 30 days.  This bill’s introduction comes just 18 months after Congress passed the Veterans Access, Choice and Accountability Act that increased the amount of VA treatment centers, doctors, and staff as well as gave the V A Secretary more authority to fire under-performing employees, which, of course, hasn’t been done while the bonuses have flowed.  Anyway, Guinta and Gabbard believe their bill would provide a significant incentive for VA executives to give veterans the efficient and timely care they deserve.

The State Senate’s Energy and Natural Resources Committee heard bill S B 3 3 3 yesterday.  According to Senate Majority Leader and committee chair Jeb Bradley, the bill would increase the cap for energy generating customers who sell surplus supply to utilities.  Bradley believes increasing the cap would encourage more participation in solar energy and other renewable energy sources.  Said Bradley quote:  “While there are benefits of increasing this cap, we need to make sure that in a region with some of the highest energy costs in the nation, energy customers who do not take advantage of residential solar are not burdened by high electric rates due to renewable energy subsidies.  This bill offers a realistic compromise that will keep rates in check for both regular ratepayers and renewable energy customers.”

The Bedford Police Department is on the hunt for a suspect in an attempted burglary case.  The incident happened on Tuesday when a resident on Donald Street alerted police to a man trying to break into his house.  Chief John Bryfonski said the department is actively searching for the attempted burglar.  The suspect, who fled the scene, is described as a white male with red hair, wearing a blue long sleeve shirt, tan pants, brown shoes, a dark blue hat, wire-rim glasses and is possibly operating an older model S U V.  Anyone who may have seen someone matching this description or who has additional information about this incident is asked to contact the Bedford Police Department at 4 7 2 5 1 1 3.

Memo to Chief Bryfonski, not sure that your new P R firm is much of an improvement over your officers’ own P R handiwork.  Just a thought as budget time nears!