The New Hampshire Senate passed S B 3 6 1, which bans the sale of premixed synthetic urine, yesterday.   Bill sponsor Senator Jeanie Forrester, Republican from Meredith, issued a statement after passage said banning impostor pee was an action necessary to combat the state’s horrific heroin and opioid epidemic.  Said Forrester quote:  “Commonly used to defraud drug and alcohol screening tests, this product is easy to obtain and has no other foreseeable uses outside of circumventing drug tests.”

In another move to combat the epidemic, District Twenty Four Senator Nancy Stiles, Republican from Hampton, introduced S B 5 3 2, which would remove the prior authorization requirement for medically necessary substance abuse treatment.  Stiles issued a statement saying the bill was a necessary step in the ongoing drug fight because quote: “As we heard from many individuals who testified today and during the Joint Task Force, time is of the essence when those suffering from a heroin or opioid addiction decide to seek treatment.”  She said the bill would not only remove prior authorization requirements, but also standardize the pre-authorization process to follow the recommendations of the American Society of Addiction Services.

The Senate also voted to study two bills addressing tax credits for businesses.  S B 479-FN would establish a credit against business taxes for implementing employee profit sharing and S B 511-FN-A would refund of a portion of state education property taxes paid by taxpayers who claimed the federal child and dependent care tax credits with funds from education trust fund.

District Nine Senator Andy Sanborn, Republican from Bedford, issued a statement following the vote saying the bills were great in theory, but needed more work to quote “ensure that they fully address the intended principles they represent.”  He said he was disappointed that the Democrat sponsored legislation quote “looks to only help a slice of New Hampshire citizens, when policies like this should benefit everyone.”  Sanborn said the bills would quote “do nothing but create class warfare.”

He faulted the profit sharing bill saying it may incite issues among employees in companies that use the tax credit for profit sharing as only some employees would be eligible for the profit share.  He said the bill refunding a portion of the statewide property tax for education was flawed because it failed to provide relief for renters who qualified for the same federal tax credits.  Said Sanborn, quote:  “I fully support tax exemptions for families and businesses in our state, especially those who are paying extremely high prices for childcare.  However, this tax reduction does not include renters who would also benefit greatly from a tax break geared toward families needing child care and a benefit for one group and not the other would, again, establish class warfare.”

The Curriculum and Instruction Committee of the Manchester Board of School Committee has set a public hearing to take public input on a proposed Curriculum Management Plan.  The twenty page document was expected to be adopted by the board at its meeting on January eleventh.  However, it was re-referred to committee after several members raised questions and concerns.

Committee Chair Debra Langton and committee members John Avard, Lisa Freeman and Rich Girard expressed serious concerns about the document’s failure to involve parents, teachers and the community at large in the process of evaluating and recommending curricular items at the committee’s meeting on January 26th.  The committee directed the district to conspicuously post the document on the district’s Web site and have its communications coordinator notify the media and the public that it was there and comments were requested.  The committee also moved to hold a hearing to open a dialogue with interested citizens.

Girard: Taking matters into his own hands

Following the meeting, Langton emailed Superintendent Debra Livingston to ask about available dates.  In short, nothing happened.  So, at its meeting on February tenth, the committee set a hearing date of Monday, March seventh and again directed the materials be published on the district’s Web site and the media notified.

40 Days for Life will kick off its Lenten Prayer Vigil for Life this Monday, February fifteenth with an evening of prayer, music and refreshments in Montminy Hall at Ste. Marie Parish on the city’s West Side.  The event is scheduled from 7 to 8:3o P M. 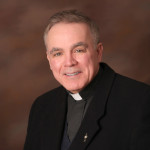 Fr. John: To give keynote address

The guest speaker will be Fr. John MacKenzie, Associate Pastor of Ste. Marie and Sacred Heart parishes.  Fr. John has served many parishes throughout New Hampshire and is a regular prayer warrior for life at the Planned Parenthood clinic on Pennacook St. in Manchester.  (As a parishioner, I can tell you he’s also a marvelous homilist.)  Joining the event will be the renowned choir from Northeast Catholic College (formerly Magdalen College).  Their performance will no doubt stir the soul.

40 Days for Life invites you to be part of the opening event and prayer vigil and asks that you invite a friend to come along.  Please R S V P to 40 days for life manchester @ gmail dot com.  We’ve linked to their Web site for additional details.