The Committee on Coordination and Administration of the Manchester Board of School Committee will meet tonight at 5:30 in City Hall.  As reported last week, Manchester Public Health Director Tim Soucy is looking for permission to provide school nurses with Narcan.

Also on the agenda is the pesky issue of head lice.  The board’s current and prior policies are on there after a motion by Ward Five Committee Member Lisa Freeman raised the topic at the board’s meeting on February Third.  While Freeman had campaigned to scrap the current policy, which allows children with live bugs in their head to stay in school, she decided to bring the change forward after hearing a parent from Gossler Park School call into this radio show during an interview with Soucy to confront him over the district’s policies, which she says has led to her two daughters being infected a total of four times in the last two years.  The caller works at a private pre-school in Manchester that has different policies.

Mayor Ted Gatsas’ request that the board reinstate a residency requirement for top district administrators, including the superintendent, assistant superintendents and building principals is also on tonight’s agenda.

Following that meeting, which starts at five thirty, the full Board of School Committee will begin at seven.  The agenda contains a presentation from Superintendent Debra Livingston about the district’s S A T results.  As there’s actually no supporting material for that item on the agenda, it remains to be seen exactly what results will be reported on.  Regardless, expect a discussion of the district’s handling of registering students for the test and its decision to close school to the more than three thousand high school kids who weren’t taking it

Discussion is also expected on redistricting.  Since the special meeting called to discuss the matter on February twenty ninth, there’s been an online meeting where several questions were raised by board members about the proposals then made by Livingston, Girard and Gatsas.  Several board members have since offered their own plan.  Ward Eight Committee Member Erika Connors, proposed two options, both of which close West as a high school and otherwise quote un quote “re-purpose” the building.  In response, Ward Ten Committee Member John Avard proposed closing Memorial as a high school and similarly re-purposing the building.  Ward Four’s Want suggested moving fifth graders into the current middle school configuration and Ward Seven’s Ross Terrio suggested exploring whether or not the town of Hooksett would take some of the kids who live on Hackett Hill into its elementary schools to ease overcrowding at Northwest.

There’s ooohhh sooo much more.  Might we suggest you grab your favorite snack and beverage and tune in to tonight’s meetings at City Hall?  They’ll be on Manchester Public T V Channel 2 2. 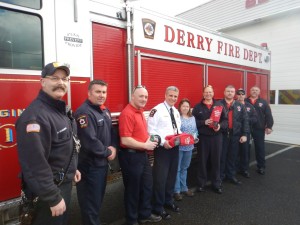 A representative of the Merrimack Valley Kennel Club, Sheila Johannesen, donated two Surgivet Pet Oxygen Mask Kits to the Derry Fire Department last week.  The donations will help the department’s efforts to treat pets and animals in distress.  Johannesen has donated fourteen kits to area fire departments.  Her ultimate goal is to have a kit on every emergency response vehicle in the state.  This initiative is funded through Kennel Club dog shows and related events.  The club also takes donations.  If you’d like to help with this effort, Johannesen can be contacted at 4 9 4 5 4 3 9 or by email at sheila and roy at a o l dot com.

It was an interesting weekend on the campaign trail.  There were Republican conventions in Washington, D. C. and Wyoming that apparently nobody cared about as they failed to garner much attention.  The twenty eight hundred ten convention-goers casting votes in D. C. gave Florida Senator Marco Rubio a fifty vote victory over Ohio Governor John Kasich, one thousand fifty nine to one thousand nine.  The convention-goers really don’t like either Donald Trump or Texas Senator Ted Cruz.  They finished with three hundred ninety one and three hundred fifty one votes respectively.

The big news of the campaign over the weekend, however, was the disruption of a massive Trump event in Chicago on Friday night by paid, professional, political activists from Move On dot Org, which is funded by billionaire George Soros, and volunteers from Bernie Sanders’ campaign.  Trump called off the rally in the hopes of avoiding anybody getting hurt, but protesters clashed with Trump supporters both inside and outside of the arena.  Several arrests were made.

Trump: Secret Service to the rescue

Then, on Saturday, a spectator rushed the stage where Trump was speaking in Dayton, Ohio.  Secret Service agents grabbed the guy as he got to the stage, but not before Trump turned around looking like he was going to take a swing at whomever was coming his way.  Agents surrounded Trump on the platform until the intruder was removed from the scene. Trump cracked a joke then went right back to his speech.

GOP: Its all his fault…

His Republican rivals condemned Trump for the violence saying it was a result of Trump’s rhetoric.  Democrats did the same, including the current occupant of the White House who, interestingly, said that those who sought to be the nation’s leader needed to use rhetoric that brought people together, not inflamed their hatred.  This from the guy who gave us the term “bitter clingers.”  Ain’t that sumptin?!?  Oh My HEAD!