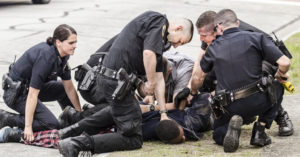 on Massebesic Street yesterday, a detective in the area spotted the suspect.  As the detective approached, the suspect took off.  The detective gave chase and a fight ensued.  According to photojournalist Jeffrey Hastings, the detective radioed for help before his radio went silent.  The dispatcher asked for his location, but received no response.  Multiple marked units flooded the area.  Hastings said when he arrived, the suspect and the detective were struggling and that up to seven officers were trying to bring the suspect under control as he punched and rolled around the ground.  Officers tazed him quote “multiple times with no response.” 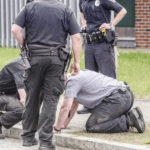 Eventually, wrote Hastings, the suspect was cuffed and removed from the scene.  Hastings reported the detective, was clearly in pain as he was helped up from the ground and put in a cruiser and brought to the Elliot Hospital just a couple of blocks away.  The department has yet to issue any statement about what happened.

The Manchester School Board’s Special Committee on Redistricting did not change the time line for their redistricting proposal to adjust for Superintendent Debra Livingston’s retirement on October first.  The committee’s current time line has it releasing its completed redistricting proposal by October first, with public feedback to be collected between then and the end of the year with final proposal to the full school board by its first meeting in January.  Livingston gave the committee a report on the total capacity of each school building, but it included using the portable classrooms the board has voted to eliminate.  The committee has created a Facebook paged titled M S D Redistricting for the public to receive updates and to comment along through the process. 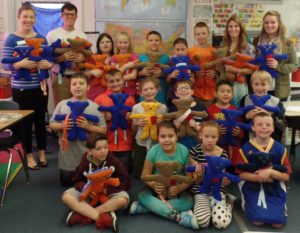 Northwest Elementary School students gave back to their local community yesterday by stuffing hand sewn bears for children in need.  Jayme’s Fund for Social Justice, a small nonprofit in Bedford, brought the Jayme’s Bears Project to Mrs. Barry’s third grade classroom after one student in the class asked if they could do something to help other children.  The students stuffed twenty-five teddy bears and wrote special notes to the children who will receive them.  The bears will be sewn up and given to children who are either sick, in difficult circumstances, or who need a bear to hug.  If you know a place that could use some teddy bears, visit Jayme’s Fund dot org.  They are always looking for homes for these special bears.

After hearing that individuals with a heroin addiction seeking care often change their minds while they wait for their insurance companies to authorize treatment, the New Hampshire Senate passed S B 5 3 2 eliminating the requirement for prior authorization allowing patients to receive care immediately.  Patients will have up to twenty-four hours to authorize their insurance while they receive care.  Lawmakers hope the bill will encourage more people to seek treatment and help curb the opioid crisis in the granite state.

The Senate also passed S B 4 6 4 which establishes a grant program that provides matching funds in each county that establishes a drug court.  Senate Majority Leader Jeb Bradley, Republican from Wolfeboro, said that establishing a drug court program in New Hampshire is a quote “critical element aimed at breaking the cycle of addiction and recidivism for drug offenders.”  The legislation was introduced last October in response to Manchester Mayor Ted Gatsas’ efforts to establish a drug court in Hillsborough County’s Northern District.

The Manchester School District recently received a ten thousand dollar grant from the Manchester Rotary Club to help create drug prevention programs in the schools.  The grant will be used to integrate drug use prevention activities into core content curriculum courses for students in grades six through twelve that are age appropriate.  The district’s plan is to subtly integrate the conversation about drugs without having a specific assembly or event.  The grant will provide stipends for the twenty nine school counselors, student assistance program coordinators and teachers representing all eight middle and high schools who will work with local service agency representatives to develop the new curriculum activities for up to 10 hours of work.

Bedford High School and Lurgio Middle School received numerous threats yesterday.  Though officials did not believe them credible, both buildings were evacuated while police searched them.  Students at the middle school were dismissed early.  The high schoolers returned to classes and were dismissed at their regular time.  Bedford Police Captain Dan Douidi  said both buildings were found to be safe, but that  police remained on the scene at both schools to ensure their safety.  All afternoon activities at both schools were canceled because of the changes in dismissal times.  However, evening activities, including eighth grade information night, were held as planned 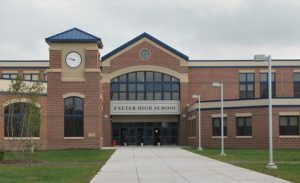 S A U 16 Superintendent Michael Morgan and police chiefs in the district’s six communities, Exeter, Stratham, Newfileds, Brentwood, East Kingston and Kensington,  issued a statement strongly suggesting Exeter High School students to stop playing the game “Assassins.”  They said it poses a threat to the safety and security of their communities.  Assassins has become a widely popular game on high school and college campuses.  Two-person teams pursue their assigned targets with water guns, inheriting the targets of those they successfully squirt.  The last team not to get squirted wins.  Students from the six communities are dressing in dark clothing and sneaking around people’s homes late at night and in the early morning hours in order to get their target.  The game has led to an increase in calls of suspicious activity to area police departments.  Charges have been filed against game players in communities across the country.