Said Bryfonski, quote:  “There will be zero tolerance for speeding, distracted driving, aggressive driving, and driving under the influence.  We are not out there to ruin your day; we are out there to save your life.  The Bedford Police Department is committed to preventing further loss of life on our roadways.”

Due to the high volume of traffic on both roads, Bryfonski said drivers should plan for extra travel time.

awaken to the fact that we have American boots on the ground in yet another undeclared, unconstitutional war that demands comment by the candidates.

Rubens said sending troops to Libya is a direct consequence of what he called the 2011 Libya bombing war, which he said was an egregious foreign policy and military error instigated by Hillary Clinton and backed by Senator Kelly Ayotte.

He also said the two thousand one Authorization for Use Of Military Force doesn’t apply to the country’s current operations in Libya, which he said did not pose a national security emergency which would grant the President temporary constitutional authority to engage in war.  He also called the move conducting warfare without Congressional authority, saying it was quote “the single most extreme overreach by the Obama Administration.”  He questioned why Ayotte, his primary opponent this fall, hasn’t spoken out against it.

The N H Department of Health and Human Services has issued a registration certificate to Prime Alternative Treatment Center in Merrimack to open the state’s fourth and final therapeutic cannabis dispensary.  Card carrying medical marijuana patients will now be able to obtain therapeutic cannabis at the facility starting today.  Facilities in Plymouth, Dover, and Lebanon have already opened.  Users have to register at one of the four dispensaries and may only get their stash where they register.  We’ve linked to information about the program, which is on the Web site of D H H S, whose budget deficit is expected to create several new clients for the dispensaries so they can just get to a place where they don’t have to worry about it.

Lachance: Wait is over

As an aside, we can only hope that State Representative Joe Lachance, Republican from Manchester Ward One, will either heed Bedford’s warnings to motorists, reported earlier in this newscast, or avoid the town altogether as he makes his way to the facility.  Lachance, a sponsor of the law, sued the state for being too slow to implement it and, no doubt, will be in a real hurry to get registered!

In honor of National 8-1-1 Day, which is today, Eversource is reminding customers, contractors and excavators to put safety first when starting a digging project of any kind.  Whether it’s as basic as planting a shrub or tree, or as complex as installing a deck or pool, calling 8-1-1 ahead to mark underground utilities is not only critical to avoid injuries and disruptions of utility service, it’s also the law.

Most people are surprised to learn there are more than 20 million miles of underground utilities in the U.S.  So, for everyone’s safety, it’s crucial that people call 8-1-1 before digging,

According to the Common Ground Alliance, the national organization that promotes safe digging practices, every six minutes someone damages an underground utility line because of digging without calling 8-1-1 first.  In New Hampshire, DigSafe oversees the public safety program.  Calling 8-1-1 links homeowners and contractors with DigSafe, which then notifies local utilities of their intent to dig.  Professional locators will visit the property to mark utility-owned underground lines. 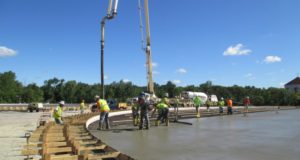 The storage tanks at the beginning

It isn’t “stop the presses” news but I wanted to let you know that the (new Manchester Water Works holding) tanks are in operation.  They went on-line July 4th.  The old reservoir is in the process on draining.  The contractor is just finishing the site work, putting down loam, grass seed, planting, fencing etc…From what I understand the contractor should be 100% completed this month.

That’s what a loyal listener sent me after hearing my interview with Mayor Ted Gatsas yesterday.  While the mayor was familiar with the issues that delayed the completion of the project that will hold something like twenty million gallons of water, he wasn’t sure it had been completed.  Fortunately, one member of our Large and Loyal Listening Audience, who lives in an abutting neighborhood, graced us with the details!  Many thanks! 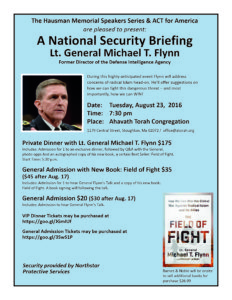 Lt. General Michael T. Flynn, the former Director of The Defense Intelligence Agency who was recently a guest on this radio show will be speaking on concerns of radical Islam and offering suggestions on how we can fight this dangerous threat and win.  The general will speak at Ahavath Torah Congregation in Stoughton, MA on Tuesday, August twenty third.

ACT! for America is cosponsoring the event with Rabbi Hausman.  For one hundred seventy five dollars, you can have a private dinner and photo with General Flynn, a Q & A session, plus a signed copy of his new book, Field of Fight.  For thirty five dollars, you can attend the general’s speech and get  a signed copy of his book.  For twenty bucks, you get to attend the event and listen to his speech.

We’ve linked to the event’s online registration pages from this news read at Girard at Large dot com.