The Manchester Police Department announced it will host its twenty sixth Citizens Police Academy.  The classes are scheduled to begin September twenty first and will continue for eight weeks on Wednesday evenings from 6:00 to 8:00 at the Manchester Police Station.  The academy is designed to inform residents about the role of the department in the city.  Students can expect informative sessions examining different aspects of police work and will be exposed to it’s glamour and excitement, along with those things that are less glamorous but vital to day to day operations.  There is no fee, but applications and background checks are required.  Seating is limited.  Applications are on line at manchester p d dot com and Officer Mark Ampuja may be contacted with any questions via email at m ampuja @ manchester n h dot gov.

School’s in! Police are watching…

Bedford Schools are back in session starting today and the Bedford Police Department is urging motorists to use caution and slow down when they are driving through school zones and to be aware of all bus stops.  The B P D will be out patrolling all school zones and bus stops looking for motorists who are speeding and not stopping for school buses.

Auburn: Applying for TAP funds, too.

The town of Auburn as announced it has applied for so called TAP funds available through the N H Department of Transportation to establish a multi-use path along Route 1 2 1 from Eaton Hill Road to Shore Drive.  In a statement issued by the town, it said, if successful, the multi-use path would provide a safe connection for walkers, bicyclists, hikers, runners, snowshoers, cross-country skiers and little green men from Mars from the center of Auburn to various trails leading around Lake Massabesic and other parts of the community.

Initial cost estimates suggest a total project cost of just under six hundred eighty thousand dollars, with construction expected in 2018 or 2019.  The grant funds would cover eighty percent of the costs.  The town would be responsible for the rest, or about one hundred thirty six thousand dollars.  We’ve linked to Auburn’s application submission from this news read at Girard at Large dot com.  This is the same pool of funds the town of Bedford has discussed tapping, pardon the pun, for a proposed pedestrian/ bike bridge over Route 1 0 1. 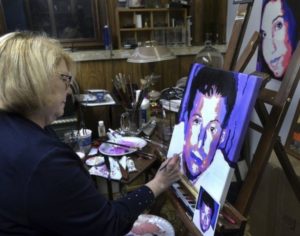 Zanfagna: Turning tragedy for the good

Anne Marie Zanfagna is an artist whose daughter Jackie succumbed to heroin addiction.  After Jackie passed in 2014, Anne Marie found it difficult to paint.  Now, Anne Marie, who hails from from Plaistow, has a new passion.  She founded Angels of Addictions, a charity that raises awareness of New Hampshire’s biggest problem and its victims.  Anne Marie paints portraits of Jackie and other Granite Staters who have lost their lives to drugs, portraying them at their most vibrant. 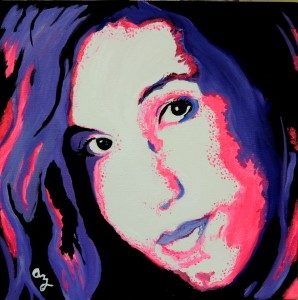 Zanfagna: Her late daughter at her best

First District Congressman Frank Guinta, Chairman of the Bipartisan Task Force to Combat the Heroin Epidemic, will host a showing of Anne Marie’s work at his Manchester office this Wednesday.  Anne Marie is scheduled to present an original work to another survivor of the crisis.  In May, she visited Washington, D.C., to urge Congress to pass the Comprehensive Addiction and Recovery Act, after Guinta led passage of a slate of House bills.  Those interested in seeing the artworks may visit Guinta’s office at thirty one Lowell Street in downtown Manchester starting at five fifteen.  For more information, call 6 4 1 9 5 3 6

Guinta will also host a town hall for officials from communities subject to new E P A permit regulations that could cost a bundle.  Sixty two locations across the district could be subject to the new “M S 4” Permit, potentially costing taxpayers in southern New Hampshire millions of dollars.  Town managers, engineers, selectman and others representing affected municipalities will gather to discuss a coordinated response to the unfunded mandate, which the E P A introduced abruptly without public comment at the Manchester Public Works Department this Wednesday at two.  Guinta, whose description of the problem we’ve linked to, has challenged the legality, science and expense of the Municipal Separate Storm Sewer System (MS4) Permit in a letter to EPA Administrator Gina McCarthy and the agency’s regional administrator.

BMA: More contracts to be approved?

A special meeting of the Manchester Board of Mayor and Aldermen has been called for tomorrow night at six o’clock.  The only item on the agenda has to do with entering non-public session to discuss strategy or negotiations with respect to collective bargaining  with the city’s unions.  Based on the recent action of the board granting a one year contract to the city ‘s firefighters that reinstated their step and longevity raises and conveyed a one percent cost of living raise on top of that, we expect the rest of the city’s unions will be demanding the same, none of which, by the way, was budgeted for.

The Greater Derry Londonderry Chamber of Commerce announced it has published an updated version of its popular Beer & Mead Tour rack card.  First published last year, the original proved more popular than expected, with all copies being distributed in less than a year.  Chamber President Will Stewart said the rack cards, available at various tourist areas, are proving popular with tourists looking for something to do on their way up north or back home.