Shaw: On the hot seat in a no win situation

It was a dark and stormy night in the Aldermanic Chambers at City Hall as the Manchester Board of Mayor and Aldermen sorted through some particularly fractious issues.  Residents and business owners affected by a proposal to change traffic on President Road from two way to one way headed West turned out in force.  While residents of President Road sought changes to the traffic pattern to relieve the burdens placed on them by changes to other roads enacted in conjunction with Walmart’s opening, residents from surrounding neighborhoods, with much larger numbers of houses, opposed the move saying that while they felt for their troubles, President Road was constructed to handle commercial levels of traffic and their neighborhoods, with roads just two thirds the size, were not.

Businesses whose employees and customers access them from the West objected to the proposal made by Ward Nine Alderman Barbara Shaw saying they’d already lost several access points to their places of business and that further restrictions would lead them to leave the industrial commercial areas in which they were located or sue the city to maintain access.

Ward Nine State Representative and South Beech Street resident Victoria Sullivan urged the board not to make the proposed change, saying that everything the city had done to that point had only made a bad situation worse and that restricting access to President Road would continue that pattern by forcing traffic into neighborhoods whose roadways, unlike President Road, were ill suited for the traffic.  She also said it wasn’t right to deprive the public of a roadway used by so many to get to places that are otherwise difficult to reach. 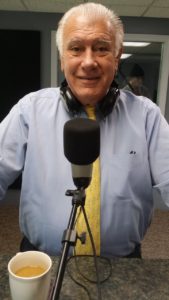 Gatsas: Will work for a “real solution.”

Despite overwhelming opposition expressed during the public comment session, the board voted eight to five to adopt the proposed change, with aldermen Dan O’Neil and Joe Kelly Levasseur at-Large, Bill Shea of Ward Seven, Keith Hirschmann of Ward Twelve and Nick Pappas of Ward Six opposed.  Mayor Ted Gatsas opposed the changes, but said he would let the will of the board stand and see what happens while he worked with the affected businesses to come up with an alternative that would actually solve the problem. Ward Eight Alderman Tom Katsiantonis was absent and did not vote.

Hirschmann: Wanted to go back to committee

Also last night, after what was clearly a discussion marred by confusion or obfuscation, the board voted to change its health plan to eliminate exclusions on providing gender reassignment therapy and surgery to transgendered individuals.  Human Resource Committee Chair Keith Hirschmann pushed to send the matter back to committee to further vet the issues and consider alternatives that would provide the coverage but not at the expense of all employees in the plan.  Ward Six Alderman Nick Pappas queried why the city would provide this coverage if it doesn’t provide for liposuction, arguing that obesity is a disease with significant health consequences.  Mayor Ted Gatsas asked why the city would provide this coverage when it doesn’t provide for fertility treatment, questioning why it was okay to discriminate against people who medically need help to conceive.

Human Resource Director Jane Gile reiterated that the city, as a self insured entity, didn’t need to comply with the dictates of Obamacare and eliminate the coverage exclusions, but again warned there could be unspecified consequences if it didn’t, saying it could trigger other discrimination laws.  She failed to specify what those other laws were and City Solicitor Tom Clark said he’d not yet had a chance to investigate what they may be, though he agreed the city did not, under the law, need to make the changes brought forward.  In the end, only Hirschmann and Pappas opposed the change.  At-Large Alderman Joe Kelly Levasseur abstained for want of more information.  Gatsas said he would veto the changes if there weren’t enough votes to override the veto, so he said he would simply move on.

The board also voted to approve a rather lucrative contract with the Association of Manchester Police Supervisors.  That vote, however, was not big enough to override Gatsas’ veto.  While Gatsas praised the police for all they do, he said the budget simply could not support the cost.  Opposed to the contract were aldermen Patrick Long of Ward Three, Tony Sapienza of Ward Five, Bill Shea of Ward 7 and Joe Kelly Levasseur at-Large.  Ward Eight Alderman Tom Katsiantonis was absent.  Unlike with the patrolmen, nobody switched their vote on the veto override, so the veto was sustained, but it will be back as a motion to table was accepted and passed after the item was killed.

After that vote, Finance Officer Bill Sanders presented a financial update on the city budget, revealing a projected deficit of over two million dollars, largely resulting from the pay raises given by the aldermen to various employee union groups.

Our friends at Jacques Flower Shop, located beneath our Super Secret Broadcast Location in scenic Pinardville, will be hitting the streets of Manchester today to hand out flowers to busy commuters to help brighten up their week as part of the “Petal it Forward” program, in partnership with the Society of American Florists.  Petal it Forward is response to the release of data by the society which shows the positive emotional benefits of flowers. 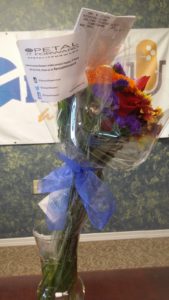 For me to “petal forward”

University research reveals that flowers have an immediate impact on happiness and long term positive effect on moods.  Now, a new survey has found that, when it comes to flowers, it’s just as good to give as it is to receive.  With this in mind, the “Petal it Forward” team is not only going to spread happiness to those lucky souls who cross City Hall Plaza today by giving them a bouquet of flowers, they’ll also give them a second bouquet they can give to a family member, friend, co-worker or stranger so they can “Petal it Forward,” too.  Like always say here on Girard at Large, flowers or a gift from Jacques can make any occasion special and any special occasion better!  They just proved it, again!