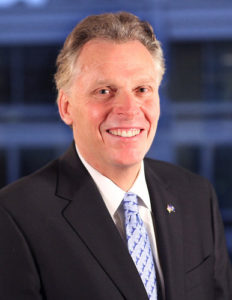 Virginia Governor and Clinton compatriot Terry McAuliffe has granted voting rights to as many as 60,000 convicted felons just in time for them to register to vote.  That number is five times more than the thirteen thousand previously reported and likely enough to win the state for his long-time friend, Hillary Clinton.

McAuliffe had sought to allow all of Virginia’s two hundred thousand felons to vote, but state courts said each individual felon’s circumstances must be weighed.  Despite that requirement, McAuliffe used a mechanical autopen to rapidly sign thousands of letters, as if he had personally reviewed each case and determined the felon in question had met the requirements to have their voting rights restored.

The story, which was broken over the weekend by The Daily Caller News Foundation Investigative Group, has raised numerous questions and concerns as polls in Old Dominion have showed Donald Trump gaining on Clinton as the election nears, cutting her once double digit lead by more than half, with many polls showing the race within the margin of error.

In addition to the letters reinstating their voting rights, McAuliffe who managed Clinton’s unsuccessful 2008 presidential campaign and has publicly asked restored felons to vote for Clinton, also sent voter registration forms with pre-paid return postage, something not typically done in Virginia.

We’ve linked to the entire story, which is a real jaw dropper, from this news read at Girard at Large dot com.

Also on the national stage, the F B I, whose deputy director’s wife received nearly half a million dollars in contributions from McAuliffe’s PAC in a run for the Virginia General Assembly, somehow was able to sort through the six hundred and fifty thousand emails found on the computer of Clinton aide Huma Abedin in just eight days to determine that there was nothing new seen with respect to their investigation into Clinton’s illegal use of a private email server to transact sensitive national security business.

Of course, tomorrow is Election Day and the final stop on the campaign trail for Donald Trump and running mate Gov. Mike Pence will be right here in Manchester, tonight.  Trump’s final rally of the campaign will be a big one at the S N H U Center downtown.  Doors open at 5.  The event is scheduled to start at 8.  Trump has pulled ahead of Clinton in the state according to several recent polls.  Our number one fan Christopher Duffley is scheduled to get things underway with his one of a kind patriotic performance of the National Anthem!

Lamontagne: Urges conservatives to back Sununu

G O P gubernatorial candidate Chris Sununu received a conservative boost over the weekend from a letter circulated by conservative standard bearer Ovide Lamontagne.  In a letter to conservatives, which we’ve published at Girard at Large, Lamontagne expresses his exasperation with Sununu for his vote to fund Planned Parenthood as an executive councilor.  However, he also shares that he’s met with Sununu and found common ground on the issue of Life he believes is sufficient reason for those who defend and support Life to vote for him.  Wrote Lamontagne quote:

…shortly after winning his Primary, Chris called me to discuss his views on a host of conservative issues and specifically asked me to help him understand what pro-life initiatives I thought he could support.  As we discussed a number of these issues, he explained his opposition to late term and partial birth abortion; his support of conscience rights for health care workers; his view that the buffer zone law should be repealed;and his belief that abortion providers should be held to the same health and safety standards applicable to healthcare facilities such as ambulatory surgical centers and providers.  While he supports a women’s ability to have an abortion during the earlier stages of pregnancy, he said he strongly disagrees with the extremist views of Colin Van Ostern who has the full-throated endorsement of Planned Parenthood’s New Hampshire Action Fund.  Among other things, Van Ostern supports abortion through all 9 months of pregnancy for any reason; opposes common sense health and safety standards for abortion clinics; and given the chance, I believe he would support taxpayer funding of abortion, the official position of Planned Parenthood nationally (i.e., they want to repeal the Hyde Amendment).

Lamontagne provided a letter from Sununu memorializing his pledges on these items of importance to the Right to Life movement.  Lamontagne also listed several other areas of agreement with conservatives, such as the elimination of Common Core and opposition to taxpayer funded commuter rail among others.

When I consider what is at stake in this election — and despite my disagreements with Chris Sununu on some issues which are very important to me, and I know are important to you — I believe that conservatives and all NH citizens will still be much better served with Chris in the Corner Office than Colin Van Ostern.  This is not even a close call.”

On November 1st, the Manchester Fire Department said it welcomed its 700th visiort thanks to the Safe Stations program, which has been in operation for just six months.  The department had a quote “astronomical 150 visits in the month of October, the largest month to date.”   Emergency Services Director Christopher Hickey said the department has had far more people looking for help than have overdosed in the Queen City.  Since January first, there have been 6 6 8 suspected opiate-related overdose calls.  In just 6 months, Hickey reports there have been 7 1 2 visits through Safe Stations.  Quote:

People want help, and we give them the outlet.  The process does in fact work.

He said Safe Stations is still a work in progress, but that they are rapidly building a format and an idea that can be duplicated across the country with the right partnerships.