Governor Christopher Sununu will make his Budget Address to the General Court in the House of Representatives today.  The address, which is about the only thing not yet canceled, is scheduled to begin at Noon and will be live streamed from the House of Representative’s Web site.  We’ve got the link in this newscast at Girard at Large dot com.  Sununu’s will be the first budget presented by a Republican governor in fourteen years, which has lawmakers in the majority party looking forward to the presentation and the Democrats grabbing for duct tape and matches.

The House, by the way, put out a notice yesterday saying it will open today’s session at ten A M as planned.  House Spokesman Jim Rivers said that following the budget address, if the storm has intensified to the point where travel has become hazardous, the speaker may (emphasis in the original) suspend the House Session and resume next Wednesday, with the usual session also taking place on Thursday.

The Coalition of New Hampshire Taxpayers is urging citizens to contact their legislators in support of a bill that would prohibit the recipients of county or municipal funds from using such funds for lobbying.  House Bill 2 2 3 came out of the House Municipal and County Government Committee with an Inexpedient to Legislate recommendation, meaning the committee wants the House to kill the bill.  As C N H T put it in an email to its supporters quote: (Note:  All emphasis in the original.)

Do you believe taxpayer funds should be used for lobbying? Currently they are in many instances…Please CALL and ask your Reps to vote NO to the ITL, and thus APPROVE and SUPPORT the bill.

The House vote is scheduled for today, so there is some urgency if you want to let your state rep. know you support the bill, which we’ve linked to from this news read at Girard at Large dot com.  We’ve also linked to the page on the House Web site where you can determine just who your state rep is so you can contact them.  It’s actually a pretty cool page, so be sure to check it out.  http://www.gencourt.state.nh.us/house/members/wml.aspx

Timberlane Regional School Board Member Donna Green of Sandown has been recognized yet again for her efforts to bring transparency to the ever intransigent school district she was elected to oversee.  The New England First Amendment Coalition will honor Green for her Right-to-Know advocacy and work on behalf of the First Amendment.

Green will be presented the Antonia Orfield Citizenship Award for her efforts in requiring New Hampshire agencies to provide documents electronically when requested.  As listeners of this show are well aware, Green took a Right to Know battle against Timberlane to the state Supreme Court, which ruled unanimously in her favor.  The Citizenship Award is given annually to an individual from one of the six New England states who has tenaciously fought for information crucial to the public’s understanding of its community or the actions of its government.

Green will be honored at NEFAC’s New England First Amendment Awards luncheon on Feb. 24 at the Marriott Long Wharf in Boston.

This is the third award Green’s received in the past year and a half for her efforts to support the public’s right to know.  She received the Nackey S. Loeb School of Communication’s First Amendment Award, alongside the late David Pearl of Hooksett, in November.  Prior to that, the New Hampshire Press Association conveyed one of their annual awards to Green for her Timberlane and Sandown Blog postings exposing the district’s behind the scenes dealings.

Green said she was honored and grateful for the award and thanked her attorney, Richard Lehmann, her compatriots at Right to Know New Hampshire, and her husband Arthur for their efforts and support. 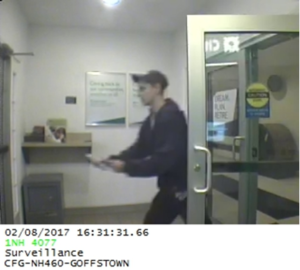 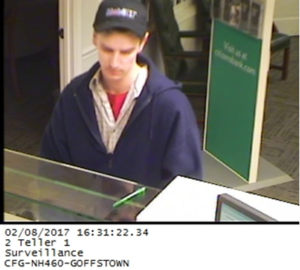 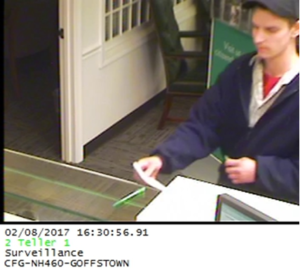 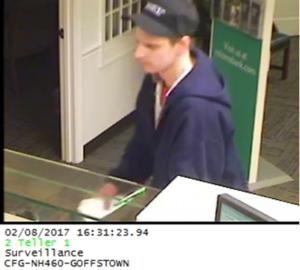 The Goffstown Police Department is looking for the public’s help to locate a bank robber.  Yesterday, at about four thirty, the Citizen’s Bank located at 11 Church St reported a robbery where a male passed the teller a note, demanding cash.  No weapon was shown and the male suspect made off with an undisclosed amount of money.

The suspect was described as a five foot nine white male in his early twenties, weighing about one hundred forty pounds.  He was possibly seen leaving the area in a newer model silver Honda Accord or Civic.

The investigation is ongoing and anyone with potential information is urged to call the Goffstown Police Department at 603-497-4858.  We have pictures of the rocket scientist who all but smiled for the security cameras.

The Bedford Town Council Meeting that was canceled for last night won’t be rescheduled.  All agenda items from the meeting will be added to the agenda of the council’s next regularly scheduled meeting.