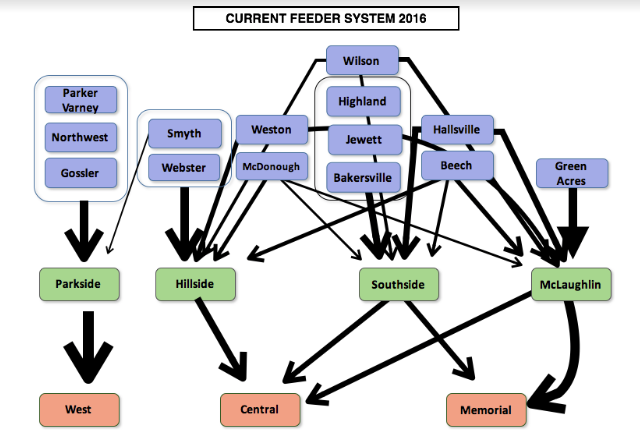 On Monday, April 10th, the Board of School Committee will entertain redistricting recommendations made by Superintendent Dr. Bolgen Vargas and Leslie Want, the Committee Member from Ward 4 and Chair of Special Committee on Redistricting.  It is immediately below this introduction. 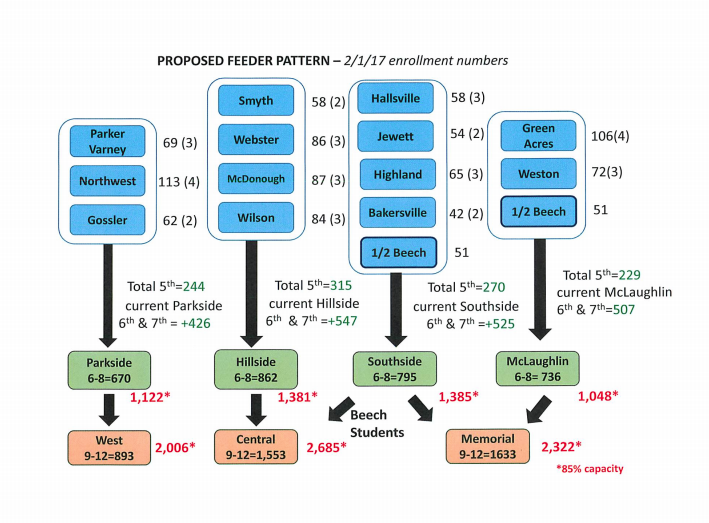 It is important to understand what this plan is designed to do.  According to a recent press release issued by the district,

Though there is another recommendation that will shift between two and four dozen kids from McDonough to Smyth Road, eliminating a so called “attendance island,” this plan does not address the outstanding issues at the elementary schools.

Originally, the proposed feeder system redirected Bakersville students from Southside and Memorial to Parkside and West, as you will see below. 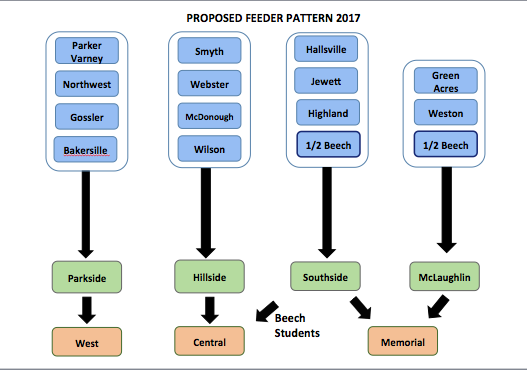 Proposal that was presented to the public

Want pressed the case that such a change would benefit Bakersville’s kids because of smaller classrooms at the West Side schools and the availability of specialized programs.  She also argued that it was necessary to level out the numbers at the middle school levels.  Because Bakersville’s parents made themselves known and because moving Bakersville’s students away from Southside and Memorial were never necessary to “make the numbers work” Superintendent Vargas eliminated that proposal, leaving well enough alone in his recommendation to the board.

Despite this favorable change, the plan still begs many questions, which is why I’m writing this article and looking for your feedback.

In every press released issued by the district and every forum held by Want and Vargas, the virtues of a dedicated feeder pattern were extolled.  For the record, if we’re going to continue to operate a static system that assigns students to schools based on where they live, I wholeheartedly agree with those extolled virtues.  In one press release, the district put it this way:

That said, the district also issued statements that said this:

The exception to the single feeder school system in the proposal is Beech Street School, where half the students will attend Southside Middle School and the other half McLaughlin, as they do now. Under the new proposal, all former Beech Street students from both of those middle schools will reunite at Central High School.

On its face, this contradicts the stated purpose and desire for realigning the current feeder system, and begs the obvious question.  Why?

I attended five of the ten meetings on the original proposal that was presented to the public.  I recall this question being asked at two of them.  The answer given by Committee Member Want was that, despite redirecting the kids from Bakersville to the West Side, Beech Street’s graduating fifth grade class had to be split because its population couldn’t be accommodated at any one of the three middle schools on the East Side of the river.  That’s not the case and I offer this proposal not only as proof, but also to get feedback on what you think. 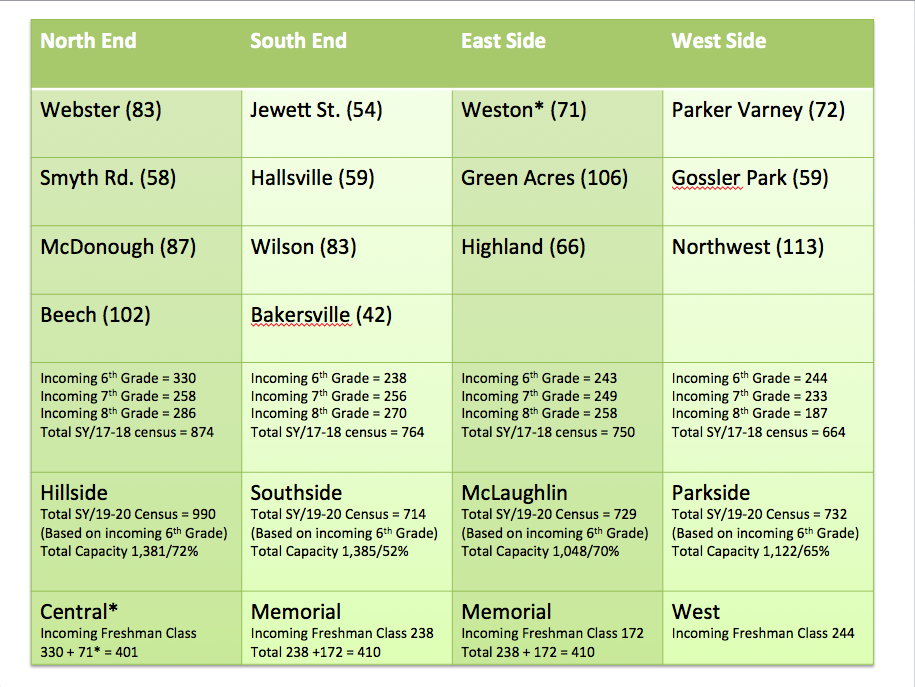 An alternate to consider

My goal was to take contiguous neighborhoods and keep them together as best as possible.

In the “North End” feeder pattern, a whole lot of kids will be able to walk to Hillside.  That’s important when considering how poor families without transportation access the school.  It is also important to consider what happens when the kid misses the bus or wants to stay after school to get extra help, participate in an extracurricular activity or a sport.  Unlike the plan on the table, which takes Beech Street kids from the Memorial feeder pattern and brings them to Central, this plan keeps Beech Street kids with all of the others that would continue on to Central from Hillside.

As with the North End feeder pattern, a whole lot of kids will be able to walk to Southside from their neighborhoods served by the four feeder schools on the “South End” pattern.  Busing would be minimal and Southside would not be out of reach for anyone that needed to walk there for any reason.  Wilson’s attendance district is adjacent to Hallsville’s and Jewett Street’s and Bakersville’s, which is adjacent to Jewett’s which is adjacent to Hallsville’s.  It’s a solid community cluster that would be well served by having a middle school in common.

The “East Side” feeder system is a bit of a misnomer established by two simple facts:  First, the vast majority of students who attend McLaughlin have to be bused, no matter where they come from.  Second, the vast majority of students who attend Highland, Green Acres and Weston will need to be bused no matter which middle school they go to.  So, it seems to make sense that, in this case, kids who have to be bused be bused to a school that can only be reached by bus.  It also makes sense given that McLaughlin is dead center for these three schools’ attendance districts.  Highland’s district abuts Green Acres’ district o the west, which abuts Weston’s district to its North and East, meaning they’re contiguous.  About two thirds of the kids come from the East Side.

The one anomaly in this feeder pattern affects the kids who go to Weston.  From McLaughlin, they would go onto Central, where the rest of McLaughlin’s kids would go to Memorial.  This better maintains the historic norms for kids who attend all three elementary schools, particularly Weston and also equalizes the numbers entering both high schools as freshmen.

Dr. Vargas did allude to concerns with having too high a concentration of children who come from poverty and or speak English as a second language as a reason why the fifth grade class at Beech Street should be split as the kids head to middle school.  This is concerning and will be the subject of a thorough, direct line of questioning.

In closing, while I have concerns with the current recommendations and have offered an alternative, it should be noted that it appears to be an improvement to the current system, which is immediately below (as presented by Superintendent Dr. Thomas Brennan, Jr. in 2013), and is not the first time a superintendent has recommended changing the feeder system, as you will also see below. 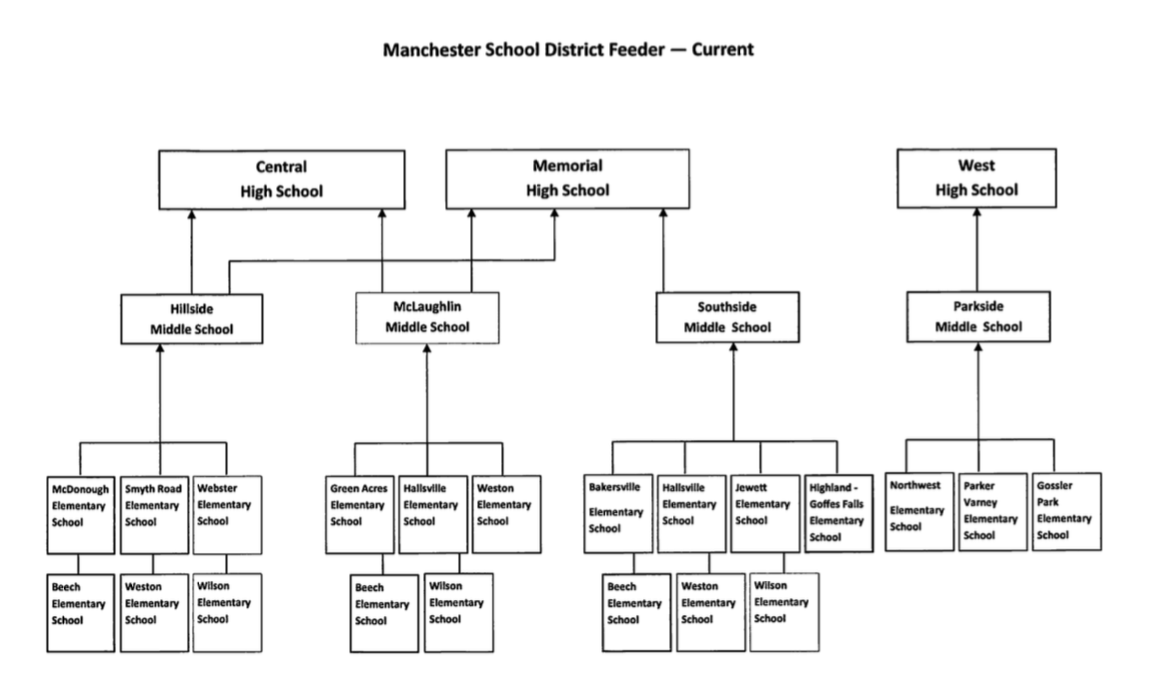 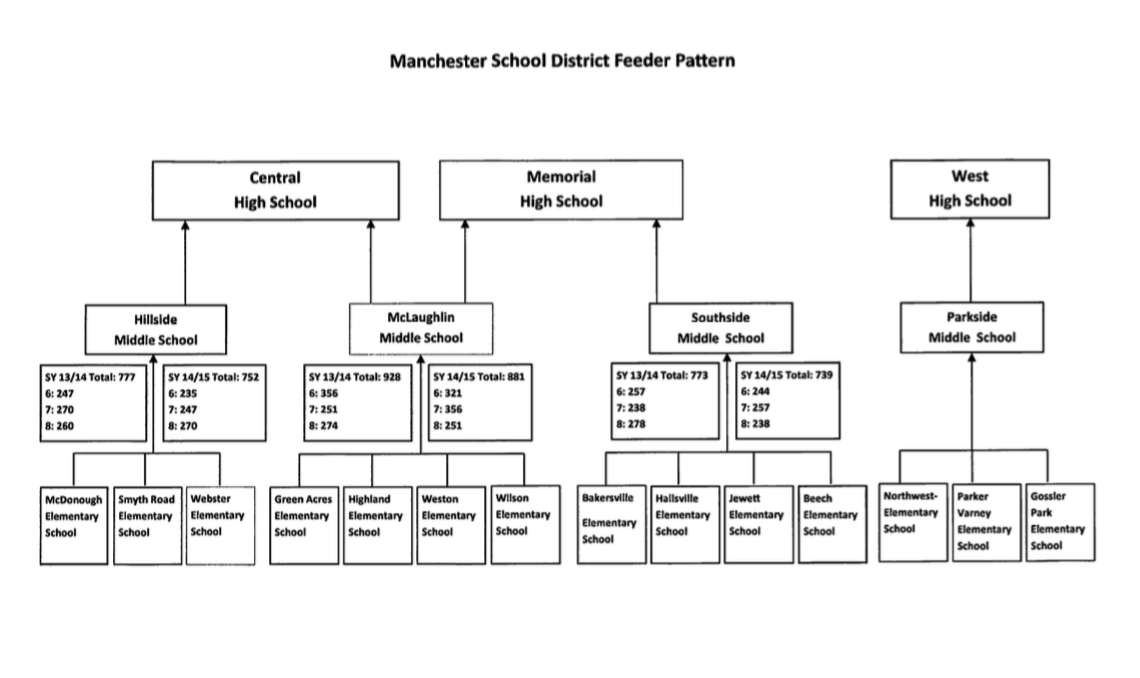 Proposed by Dr. Brennan in 2013.  Click image to enlarge.

Again, thank you for your time to read this and for sharing your thoughts.  The board will receive and likely discuss Dr. Vargas’ recommendations at its meeting on Monday.  You can offer your thoughts during the public comment part of the meeting.  Then, on Tuesday at 6:30, the Special Committee on Redistricting will take public comment on Dr. Vargas’ recommendations, and perhaps these (who knows).  Finally, on April 19th, the board will hold a special meeting to vote on any redistricting recommendations.

I would appreciate your feedback on this matter anytime between now and the 19th, but the sooner I get your feedback, the more I can do with it.

Cryptic comments from an experienced educator

Video From the Out of Control Hooksett School Board Meeting. 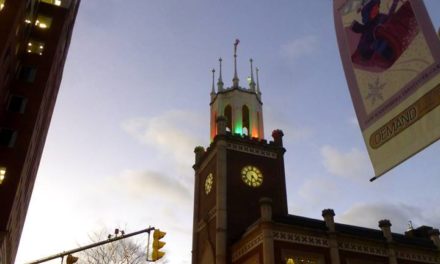