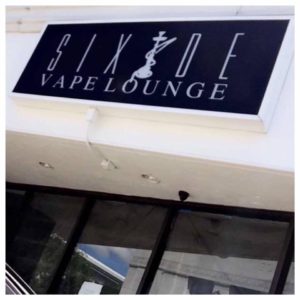 Sixide Vape Lounge, at 1 2 3 Hanover Street in Downtown Manchester, owned and operated by Randy Guerrero of Manchester, has had its state Alcohol and Tobacco License revoked.  The Manchester Police Department, in conjunction with the Office of the City Clerk, Office of the City Solicitor and the State Liquor Commission, conducted an investigation and filed a petition to revoke the license. They alleged that in the six months the club was open, the police responded to and investigated employees and patrons consuming alcohol after hours, lewdness, indecent exposure, sales of controlled drugs, loud noise complaints, numerous assaults and fights and reckless conduct that resulted in gunshots fired in Sixide’s vicinity.

The administrative hearing was conducted by the state in the Aldermanic Chambers at City Hall in March.  Based on the testimony and exhibits presented, the hearings officer found it quote:

more probable that the gang activity, fights, gunshots and increased calls for service were directly attributable to the patrons of the Sixide establishment with an increase in violence, resulting in revocation of license

In a statement announcing the action the Manchester Police Department said it will remain vigilant in dealing with problematic businesses.  Quote:

Sixside Vape Lounge was a one such business and as a result they are no longer operating within our city. We will continue to work on quality of life issues and criminal complaints stemming from problematic businesses.

The public hearing held by the House Election Law Committee on Senate Bill 3, the bill that pretends to solve New Hampshire’s voter registration challenges, went more than twice as long as Boston’s Marathon yesterday.  Lawmakers were battered by testimony for well over eight hours as superheated rhetoric was fired at the bill, and them, from all sides.  Shortly after giving her own testimony as the bill’s sponsor, District Nineteen Senator Regina Birdsell, Republican from Hampstead, issued a statement urging support for the bill.  In the statement, she claimed the bill strengthened the state’s election system by quote:

…simply asking those who claim they are domiciled in a city or town to provide proof that they live where they say they do. This bill establishes a trust but verify system for same-day voter registration, ensuring that anyone who shows up at the polls is able to vote provided they show proof of domicile that day or agree to follow up with the town within 10 days.

She noted the bill has the support of Secretary of State Bill Gardner who she said quote:

believes that New Hampshire’s voter laws should be changed, simplifying the process for registering to vote in this state.

In his own comments, Gardner said he didn’t believe the bill would scare away new voters.  The A C L U disagreed, complaining the bill would criminalize voters who failed to provide proof of identity and or domicile after they’d registered and voted, as required by the law.  We will discuss.

The Manchester Board of Mayor and Aldermen did an about face on their motion to let voters decide whether or not the city’s school district should once again be a department of the city.  Deposed Lord Emperor Dan O’Neil, Alderman at-Large, succeeded in his bid to overturn the vote from two weeks ago by gaining approval for his Motion to Reconsider.  O’Neil said there were unanswered questions about the impact on city departments that needed to be answered before the question went to ballot.  He also curiously stated he may have been an aldermen when the schools were a department, which only goes to show that he’s been on the board so long, he doesn’t remember that it most certainly was a department of the city.

Ward Seven Alderman Bill Shea argued against reconsideration, saying restoring the district as a department, the way it was when he was a teacher, principal and, yes an alderman, would produce efficiencies that would free up cash for the district, enabling it to hire more teachers.

At-Large Alderman Joe Kelly Levasseur, who made the motion to put it on the ballot, argued making the schools a department would provide greater oversight of its operations.

Long: Would we need a school board?

Ward Three Alderman and Board Chairman Pat Long also raised a number of questions about whether or not the aldermen would become a defacto school board and argued that if any question should go on the ballot, it should be whether or not the district should have the ability to set its own appropriation and set its own tax rate.

In favoring the reconsideration vote, Ward Two Alderman Ron Ludwig, blamed the tax cap for the ills between the city and the school district, asserting that it is the root cause of the never ending dispute over the charge backs the district complains about having to pay to the city for services rendered, such as building maintenance, nurses, police officers, etc…He said the cap should be scrapped because it has handcuffed the mayor and the aldermen and if the aldermen raise taxes too much, they should face the music at election time.  Clearly showing he had no clue about the history of funding schools, he claimed that prior to the cap, the aldermen were able to placate the schools with more money.

Gatsas: And what about the raises?

Mayor Ted Gatsas countered Ludwig saying it wasn’t the cap that had hamstrung the board’s ability to fund schools, but raises like the ones he vetoed for the teachers and police officers which simply cost too much.  He said he pulled no punches in telling the aldermen that the teachers contract would lead to layoffs and he made a point of reminding them that that’s where they’re at now.

Oh, discussion broached by Gatsas over giving the school board it’s budget as requested was basically met with a “they can wait” response from Long.  Another attempt by Levasseur to fund the schools at the number proposed by Gatsas failed. 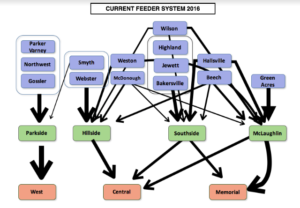 Will it get cleared up tonight?

The Manchester Board of School Committee will meet tonight in special session at City Hall to take action on the redistricting recommendations made by Superintendent Dr. Bolgen Varga to realign the feeder patterns that determine where kids to go middle and high school from elementary school.  The meeting, which includes public comment, starts at seven in the Aldermanic Chambers.