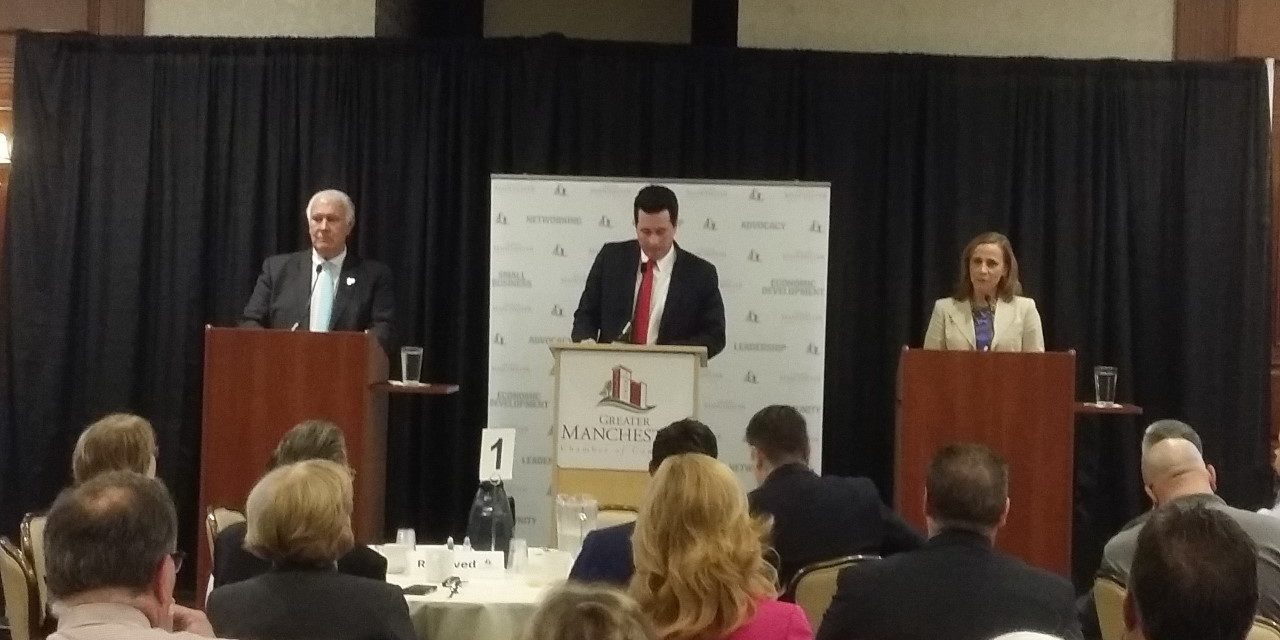 The gloves stayed off in yesterday’s Grater Manchester Chamber of Commerce Mayoral Debate between Mayor Ted Gatsas and former Ward One Alderman Joyce Craig.  Craig stayed on the attack, blaming Gatsas for what she said were falling test scores and a growing opioid crisis.  Craig continued faulting  Gatsas for the loss of tuition revenue from surrounding towns and accused him of mismanagement on an epic scale.

Gatsas highlighted the momentum the city’s gained on various fronts and touted successes in downtown redevelopment, Safe Station, M S T High School and the STEAM Ahead program, among others.  He praised the city’s new vibrancy and said that while there are things that could improve, he would “never put the city down.”

When asked about the city’s next step in fighting the opioid crisis, Gatsas discussed the need for housing to help addicts in their recovery.  Craig said she went on a ride along with the Manchester Police Department and criticized Gatsas for not having done one.

When asked what they thought the city would look like in twenty twenty, Craig said people would move here for the quality of schools, including the colleges, a vibrant downtown, a booming tech industry in the Millyard and the possibility of commuter rail.

Gatsas countered that all the things he heard Craig said were already occurring.  He talked about additional investment in roads and parks, changes that were taking place in the schools, such as the STEAM Ahead program, which he started with former Mayor Bob Baines, and the instructional innovations at Parker Varney.

Craig said good things were happening, but it wasn’t enough.  She said that SNHU President Paul Leblanc told her that when he hires people for the university, they refuse to move to Manchester if they have families because of the schools.  Gatsas countered with a litany of good things happening in the schools and a major residential development in the North End as evidence that people with kids were, in fact, moving to the city.

On education, Craig blamed Gatsas for declining test scores, saying that when he was first elected mayor, sixty four percent of the city’s third graders were proficient in reading and now only twenty eight percent.  Craig blamed the decline in literacy rates on a failure to provide the district’s teachers with adequate professional development…think about that for a moment, I think she just said the teachers can’t teach…Gatsas hammered Craig for telling half truths by leaving out that test scores fell statewide after it adopted the Smarter Balanced Assessment, a test he reminded everybody Education Commissioner Frank Edelblut has done away with.

Gatsas essentially said the number one problem facing the school district was people like Craig always running it down for their political purposes.  He hit her with a second “there you go again” after Craig said if things at Parker Varney were so great, why were not its methods being used across the city.  Gatsas countered that Parker Varney Principal Amy Allen, who piloted  the successful changes, was elevated to the position of assistant superintendent for elementary education to do just that.

Craig criticized the mayor’s pledge to veto any budget that overrode the tax cap, saying it was a misleading promise because a tax cap override needed the same ten votes a veto override required, making it veto proof.  Gatsas questioned whether or not Craig would veto the contracts that caused spending to increase by more than the cap allowed.  She said she’d propose responsible budgets within the cap.

There was a huge flash-point over taxes and spending when Gatsas, instead of answering Craig’s criticism over his solar energy proposal, brought up Craig’s now infamous 2 0 0 8 Tax Memo in which she relayed various ideas to increase revenue, including a tax on apartment rentals, a statewide sales tax and surcharges on ticket sales at the airport and civic center.  Gatsas said that, when she introduced the memo, she said they were quote “great plans.”  Craig accused the mayor of not telling the truth, which was that she didn’t say they were “great plans” but that she said they were quote “great ideas.”  She went on to explain that, as parents know, it’s wrong to say an idea was bad.  Let’s listen.  (Click on the SoundCloud widget below to hear the actual clip.)

That wasn’t all.  Believe it or not, Craig complained that Gatsas hadn’t done enough to protest state’s down-shifting of costs to cities and towns and that she would work to reverse that in Concord.  Gatsas, who actually campaigned on reversing down-shifting as a candidate for governor last year, said he’d been the strongest voice to reverse it in the state and pointed to his efforts to back Full Day K funding as evidence his efforts were paying off.

Craig faulted Gatsas for the failure of the City Solicitor’s Office to prosecute domestic violence cases and generally not understanding or being willing to understand the challenges faced by the city.  Gatsas proclaimed himself a, quote “tough guy” that understood that “sometimes, leaders have to stand alone” and said he would always speak positively about the city while working to improve it.

There was OOOHHH sooo much more and we’ve got the recording of it all in our archive at Girard at Large dot com.  Be sure to click in!