The following statement was read into the record at the September 25, 2018 meeting of the Manchester Board of School Committee by Special Committee on Negotiations Chairman Richard H. Girard (R-at-Large).  It was unanimously signed by committee members Sarah Ambrogi (D-Ward 1), Ross Terrio (R-Ward 7), Jimmy Lehoux (R-Ward 8) and Katie Desrochers (D-Ward 11). It is with both concern and frustration that we on the Special Committee on Negotiations address our efforts to negotiate a contract with the Manchester Education Association.  Because of continued misrepresentations by union officials that are stirring discontent within its membership and causing upset in some parents, as well as statements and actions taken by members of this board, we believe it is necessary to give a public accounting of how things have come to the point they are at today.

First and foremost, talks between the committee and the association have faltered not because the committee refuses to negotiate, but because the union has refused to meet until and unless we are ready to present our salary proposal.  It bears mentioning that our initial salary proposal, presented in March, would have reinstated step raises in the current school year and established a new pay matrix for new hires.  It was summarily rejected by the association, which has presented two of its own salary proposals.  Their first was a three year $19.8 million dollar demand.  Their second demand, which is also the one currently on the table, was for $28 million over five years.

After I was appointed chairman of the committee at the end of March, we went from having two meetings scheduled with the association, one in April and one in May, to seven, including one in April, five in May and one in June.  The association canceled the second to the last meeting, which was scheduled for May 29th and declared impasse on June 4th, the day of the last scheduled meeting, saying quote:

“the board and the association are very far apart on all of the major issues and that continuing conversations at this time will not be fruitful.” It was eight weeks before the association returned to the table.  Once they did, four more meetings were scheduled, three in August and an all day Saturday meeting in September.  At the first meeting in August, we offered a health insurance proposal.  During that meeting, the MEA asked us about the status of our salary proposal and whether or not it would be ready in time for our next meeting.  They said if it wasn’t going to be ready, they wanted to cancel the meeting.  They also urged us to reconsider our rejection of their five year $28 million proposal, saying it was in line with what the police unions received from the city. We told the MEA that we did not know if our salary proposal would be ready by the next meeting, but that if it wasn’t, we believed it would be in everybody’s interest to meet as scheduled because there were plenty of other issues to discuss, like the health insurance proposal we had just made and the school calendar, among many others.  We also made it clear that because we’d already lost eight weeks of negotiation time due to their Declaration of Impasse, nine weeks if you count the meeting the canceled in May, that we were uninterested in any further delays.

The day of our next meeting, August 21st, the MEA sent an email asking whether or not our salary proposal was ready, saying they didn’t want to meet if it wasn’t.  We told them it wasn’t ready and suggested other topics for discussion.  They canceled the meeting saying quote:

“until there is a salary proposal to discuss, the team does not want to meet.”

Following that, our committee, in accordance with the MEA’s dictate, decided to cancel the remaining two meetings, preferring to wait until our salary proposal was ready to present before scheduling another.

On August 27th, before our board’s meeting, MEA President Sue Hannan and Vice President Maxine Mosely approached me and offered an olive branch of sorts.  They presented a reorganization of the contract for our consideration and said they had taken another look at our responses to their proposals and noticed we had deferred on several items.  Mrs. Hannan offered to provide written explanations of some of their proposals and asked if we would be willing to reinstate the day-long session we had planned for Saturday, September 8th.  She said they would be willing to discuss other topics while we continued work on our salary proposal.  I told her I had no objection and would check with the committee to confirm the members’ availability.

On August 28th, I saw them again outside of City Hall on my way to a committee meeting.  They had just met with the mayor about negotiations.  We discussed the health insurance proposal we had made and I asked them to send their questions and requests in an email so I could have them addressed.  We received that information at 3:11 PM on September 17th, six weeks after we presented our proposal. On August 31st, we received an email from the MEA looking to confirm our meeting on September 8th.  To our surprise, it once again demanded the topic be salaries.  We responded that we would not be ready to discuss salaries and suggested other topics.  They again refused, saying quote:

“Let us know when you have a salary proposal, and we can schedule a meeting after that date.”

I have provided this time-line of events for the purpose of dispelling the idea that our committee has somehow ever been unwilling to come to the table.  Of the eleven meetings scheduled since I assumed the chairmanship of this committee at the end of March, the MEA has canceled three of them, declared an impasse that lasted eight weeks, and then issued topic dictates that gave us no choice but to cancel the last two scheduled meetings, including the one that was resurrected to discuss something other than salaries but re-canceled because we were not prepared to discuss salaries.  Frankly, ladies and gentlemen, our team is not the one playing games here.

There are two more items about these negotiations that need to be addressed in this setting.  The first is about our pending salary proposal.  Developing it has been an incredibly complex and challenging task.  As this board knows, the committee was given certain direction with respect to salaries.  In addition, our discussions with the MEA surfaced a variety of issues about which we were unaware and believed deserved to be addressed.  It is neither a simple nor easy task to reconcile the many issues that are in need of resolution.

Unless it’s about salary

In addition to the salary, there is an associated benefit issue the board has also directed us to address:  Sick time.  We believe it is inextricably intertwined with our salary proposal.  We have worked closely with outside consultants along with district staff to develop the details and account for a variety of variables, some foreseen, others not.  These items are extremely difficult to quantify and cost out and it is imperative that everything be correct when presented.  We have done, and continue to do, our due diligence and the committee would like to express its gratitude to the staff that has worked with it so conscientiously.  What we will say now is that we have established the framework and are refining the details and there are a whole lot of them and they have to be right.  We will present it when it’s ready to be presented and not beforehand.  The MEA’s refusal to meet until then is on them, not on us.

For the record, we remain prepared to meet and invite the MEA back to the table to discuss any of the other topics that are ready for discussion while we finalize these proposals as we continue to believe that waiting will only succeed in delaying the date by which a contract, in total, can be agreed to.

All the MEA has to do is call

Finally, there have been members of this board who’ve made statements in radio interviews, on social media and in direct discussion with union officials that have not helpful to the cause of restoring talks.  These statements have not only been used to bolster the MEA’s claims that we are the ones who are refusing talk, but they’ve also been used to infer that we’re not even communicating with the board.  Neither is true and it is the hope and request of every member of the committee that you will let us do the work we’ve been asked to do without having to deal with the needless distractions these unhelpful statements and actions have caused.

Thank you for your attention to this presentation.  We know it was somewhat long and involved, but believed it was necessary.  We also want you to know it was approved, as has every decision the committee has made since March 26th, by all of us on this committee. 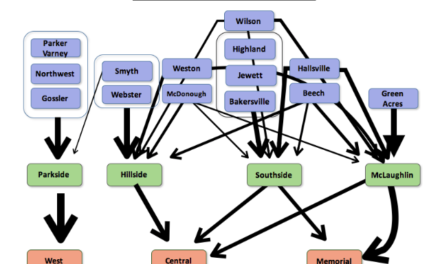