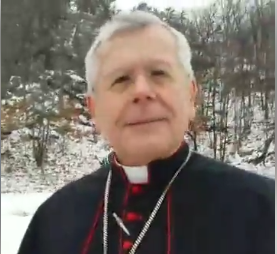 Publisher’s Note:  Catholic churches across Minnesota will reopen in violation of their governor’s order to the contrary.  This, in addition to the opening of churches in multiple other diocese, some linked to in this article, some not, and coupled with President Donald J. Trump’s declaration that religious services are “essential” and directive that they be allowed to reopen this weekend make it all the more important to sign the petition that is linked at the end of this article.  ~Publius

A petition has been launched (link below) to ask the Most Reverend Peter A. Libasci, Bishop of Manchester, to allow the reopening of churches in the diocese.  Published by Cameron Kofault, 20, of Wilton, NH on Sunday May 17, 2020, it asserts that public worship services are “at least as essential” as any business deemed as such by Governor Chris Sununu (R-Newfields), including “liquor stores, restaurants, department stores and many others” and notes that the state is allowing the re-opening of businesses not deemed essential.

Kofault drafted the petition with Dominic Girard, 20, of Manchester.  Both are parishioners of Ste. Marie Parish in Manchester.  The pair said they found themselves called to action after reading the bishop’s May 2, 2020 Letter to the Faithful and May 3, 2020 Op. Ed. in the Union Leader announcing that the public would be barred from attending Holy Mass in church for the foreseeable future.  In a statement forwarded to Girard at Large alerting it to the petition, they write:

We acknowledge that Bishop Libasci has made his decision to suspend public masses out of a desire to keep the members of the diocesan community safe from the COVID-19 pandemic.  However, as was made clear in his message to the faithful released on May 2, 2020, he has decided to prolong this suspension of church ministry, even as the state of New Hampshire begins to reopen.

We…as members of the Catholic Church in the Diocese of Manchester, must respectfully disagree with this decision.  Throughout the shutdown in New Hampshire, basic and non-essential commodities have remained available to the public on a daily basis. Drive-through fast-food, ice cream, liquor, and more have all been available with safe and sanitary measures put in place.  As these businesses maintained their services all across the state, the amount of infection and death from COVID-19 has remained extremely low.  Furthermore, the vast majority of these infections and deaths have occurred in nursing homes, all of which have been thoroughly closed to the general public.

As of this writing, approximately forty percent of COVID-19 cases and upwards of seventy five percent of COVID-19 related deaths have come from nursing homes, according to data released by the state of New Hampshire Department of Health and Human Services.  Acknowledging that nursing home “hot spots” have driven the state’s COVID-19 numbers, Sununu and DHHS Commissioner Lori Shibinette, announced increased testing at all of the state’s long term care facilities, which include nursing homes, assisted living and independent living facilities.

Though it is certainly understandable to desire to keep the innocent safe from death, there is absolutely no reason why the church cannot take the same, effective measures as these certainly non-essential services in order to provide the most essential service of all; the Bread of Life.  The ability to obtain a cheeseburger at a drive-through while being unable to attend Mass certainly sends the message that Jesus Christ is a non-essential service.

In short, there are clearly effective safety measures that have been put in place elsewhere.  Therefore, there is nothing stopping the Catholic church from doing the same in order to provide the most essential of services…(W)e ask the Bishop to have faith in the Divine Will of the God who has so clearly shown throughout time that He desires to give Himself to us through the sacraments.

The petition is the latest to surface in New Hampshire.  Others have called on Sununu to allow the reopening of hair salons, barber shops, golf courses and the state generally.  There have also been two “Re-open NH” rallies at the State House which have drawn hundreds of supporters to the capitol building.  Across the country, law suits have been filed by faith groups demanding governors allow churches to re-open for public worship services.

The Archdiocese of Santa Fe re-opened this past weekend.  New Mexico Governor Michelle Lujan Grisham, a Democrat, had tried to restrict churches to ten percent of their capacity, while allowing retail stores to open at twenty five percent.  She gave way after papers challenging the restriction were filed in federal district court.  Churches may now reopen at twenty five percent capacity.  On April 15, 2020, the Diocese of Las Cruces became the first Roman Catholic Diocese to announce its reopening despite Grisham’s continuation of her stay at home orders.  The diocese agreed to restrictions on numbers of communicants and social distancing protocols.

Click here to view the petition to Bishop Libasci.

Publisher’s Note:  In writing this article, I believe it is necessary to disclose that Dominic Girard is my son.  In doing so, I note that while he and his friend Cameron sought their fathers’ input and guidance, these young men were prompted to action by themselves and by no-one else, with the possible exception of the Holy Spirit.

Who are you paying to fight against PARENTAL RIGHTS in NH?