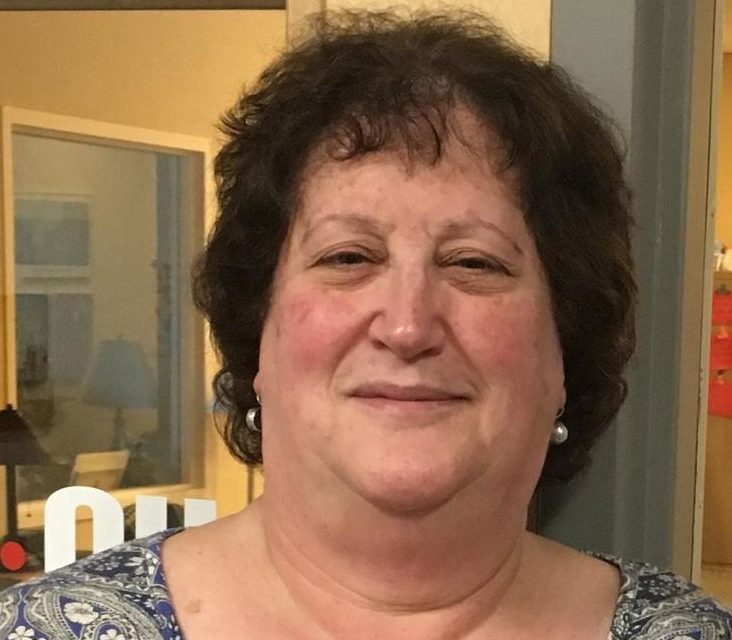 Maxine Mosley, the vice-president of the Manchester Education Association, was seen grocery shopping at BJ’s Wholesale Club in Manchester on  Friday May 15, 2020…at 10:15 in the morning. 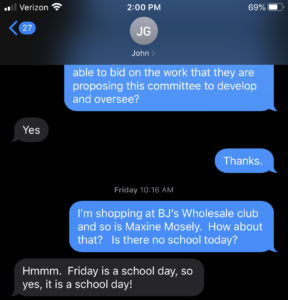 I was shopping to kill time while tires were being put on my truck.  She said “hi” to me as I was about to head down the aisle with the dental care items.  Within the minute it took me to realize it was a school day (I normally shop on Saturday), she was at the other end of the store and out the door.  Curious about whether or not it really was a school day, I sent Superintendent Dr. John Goldhardt a text.  He confirmed that it was. 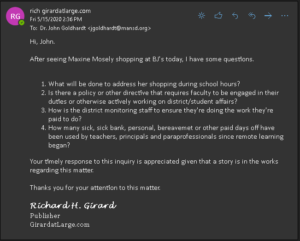 Later that day, I sent an email to Dr. Goldhardt asking the following questions: 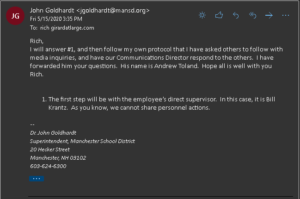 I will answer #1, and then follow my own protocol that I have asked others to follow with media inquiries, and have our Communications Director respond to the others.  I have forwarded him your questions.  His name is Andrew Toland.  Hope all is well with you Rich.

Toland, who was endorsed by the Manchester Education Association during last year’s election (he ran and lost in Ward 12 against incumbent Kelly Thomas) has yet to respond.  Goldhardt did not respond to a subsequent email requesting his comment on Mosley’s school time shopping trip, nor has he responded to an email sent yesterday advising that Toland had yet to respond and that publication of this article was imminent and would be published without the requested information if need be. 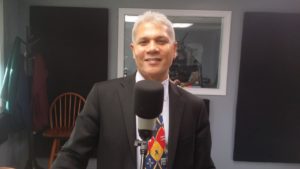 I decided to expose Mosley’s school day shopping trip because teacher absenteeism has run rampant in the Manchester School District for some time.  It was an issue that Superintendent Dr. Bolgen Vargas expressed grave concern with, as did the last Board of School Committee.  While Goldhardt has expressed similar concern over the chronic absenteeism that plagues the district, depriving thousands of students of quality instruction, he, and the current board, surrendered the proposals made by the Special Committee on Negotiations in the last term that would have restructured how sick and personal time (and ONLY sick and personal time) were used.

The loudest opponent to those proposals, who also happened to be the loudest denier of the data showing the problem, was none other than Maxine Mosley.  Not only did she argue there wasn’t a problem, she asserted that to the degree that one existed, the district should “enforce” its way out of it, while admitting that any action taken by the district against a teacher abusing sick time would likely be “grieved” by the union.  She also knows the “enforcement mechanism” in the contract is absolutely useless.

This kind of thing isn’t an isolated incident, either.  Because I was a school board member at the time, I cannot share specific details of what I’m about to divulge.  That said, not that long ago, there was an elementary school principal caught organizing a Christmas shopping trip with members of the teaching staff in their school.  In total, there were nearly twenty teachers in this  building who were going to take a sick or personal day to go Christmas shopping on a school day.  That would require the district to find almost twenty substitute teachers during a time when complaints were rampant about a well known lack of substitutes and the combining of classes where substitutes couldn’t be found.

Ironically, Mosley and the MEA will play a key role under the new contract that was just approved.  They will be “messaging” the importance of being in school when not sick.   Really?  Nothing says “credible” like “do as I say and not as I do.”  You just can’t make this stuff up!

How will it respond, if at all?

Goldhardt needs to send a message that such behavior won’t be tolerated, else it will continue unabated.  The answers to the questions posed in my original email are pertinent, now more than ever.   The students, parents, taxpayers and dedicated teachers who aren’t shopping on school time also deserve to know the answers to these questions and many, many more.

Girard:  Someone has to…

Finally, I know I’m going to “catch Hell” for publishing this story from the loudmouths who think I just want to “bash” teachers.  The question is, will they, will the teachers, the good ones, will the MEA hold Mosley and those they know are giving them all a bad rap by doing stuff like this, put their collective foot down and say “enough!”?