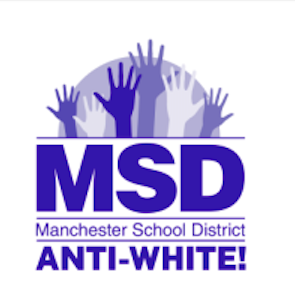 MANCHESTER,  NH June 28, 2021–Girard at-Large has obtained the Letter of Resignation of Daniel Cocannon, a site coordinator for the 21st Century after school program operated by the Manchester School District.  The letter, addressed to program director Thomas McGee, is a blistering indictment of the district’s “Diversity and Inclusion” training, about which Concannon filed a complaint with the district and the Board of School Committee on March 15, 2021.  Two days later, www.NHJournal.com published a story about the district’s mandate that Concannon and his staff take the “Whiteness” training.  At the time, Manchester Superintendent Dr. John Goldhardt told Girard at Large that the training was not mandatory.  He did not answer follow up questions about why the district would even offer such training, which he also said was available to teachers.

Rather than characterize the material, Girard at Large has linked to the full documents or included photos of them below.

In response to a request for comment, Goldhardt said only:  “I wish him well in his future endeavors.”  Goldhardt did not reply to a follow up question asking if he had any comment on the substance of Concannon’s complaint.

Recently, the school board voted to oppose HB 544, which would have prohibited any government employee training that included teaching that any race was inherently superior or inferior to any other or that any race was inherently oppressive/racist or oppressed/victim of implicit racism.  Major elements of the bill were incorporated into HB2, the so called Budget Trailer Bill, which became law last week.  At the time, only mayoral candidate Richard H. Girard (R-Ward 2) spoke out against the vote, which had the enthusiastic backing of Mayor Joyce Craig, who may have had something to do with McGee’s hiring given she appointed him to the city’s Heritage Commission shortly after being elected.  Based on his LinkedIn profile, his qualifications to run a program of this type are questionable.

After receiving and reading Concannon’s resignation letter and the complaint he filed in March, Girard again issued a statement calling on Craig to disavow and condemn these racist teachings which violate board policy and several state and federal laws regarding discrimination.

As Mr. Concannon points out, this training isn’t about educating people about racism.  It’s about accusing people of being racist based solely on the color of their skin.  This doesn’t break down barriers between people of differing backgrounds, it builds them.  It fosters distrust and hatred of people based on their differences.  It is harmful, dangerous and totally against what Rev. Dr. Martin Luther King expressed has his dream; that one day his children would be judged by the content of their character, not the color of their skin.

Noting that Craig was also the subject of another article in which she refused to disclose the “diversity training” that was being mandated for city employees, Girard said he would put an immediate stop to these indoctrinate trainings as mayor.

Below is Concannon’s resignation letter and other related materials obtained by Girard at Large. 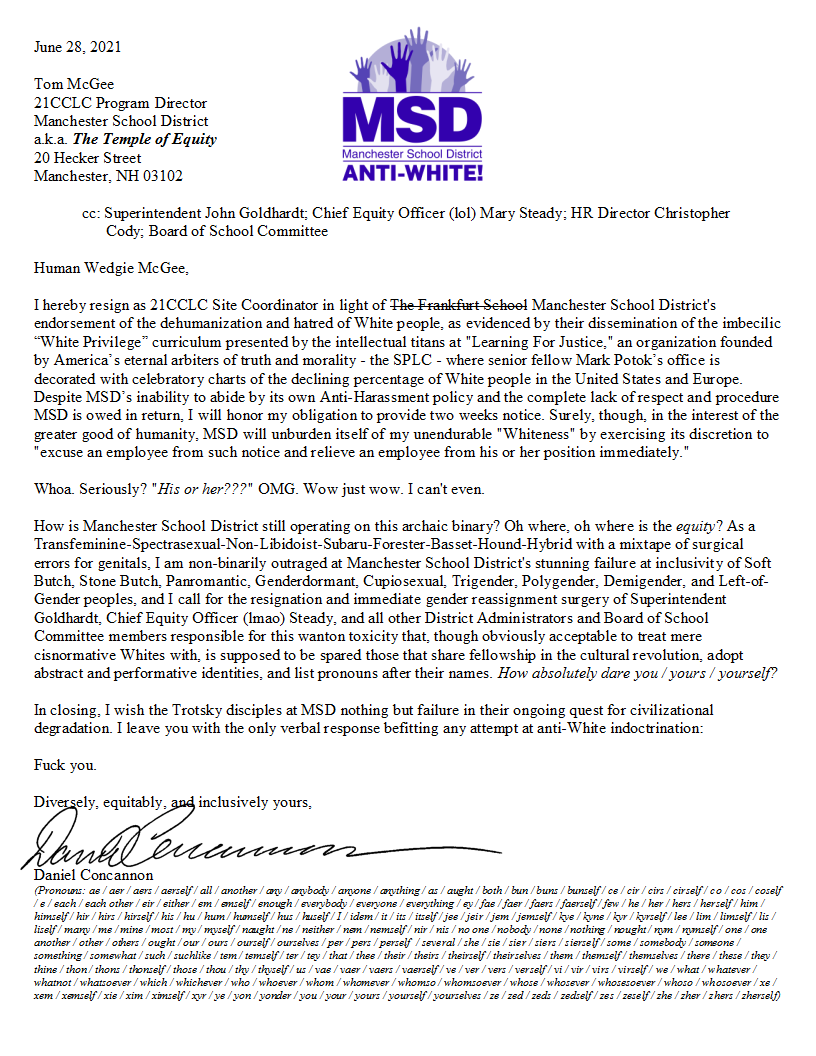 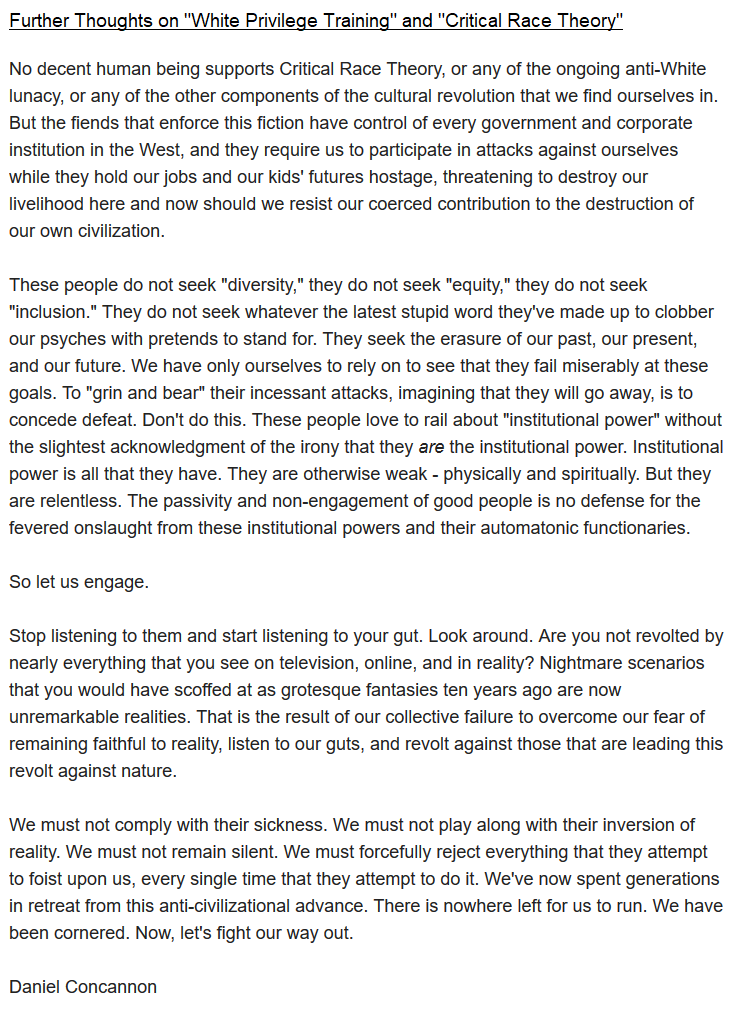 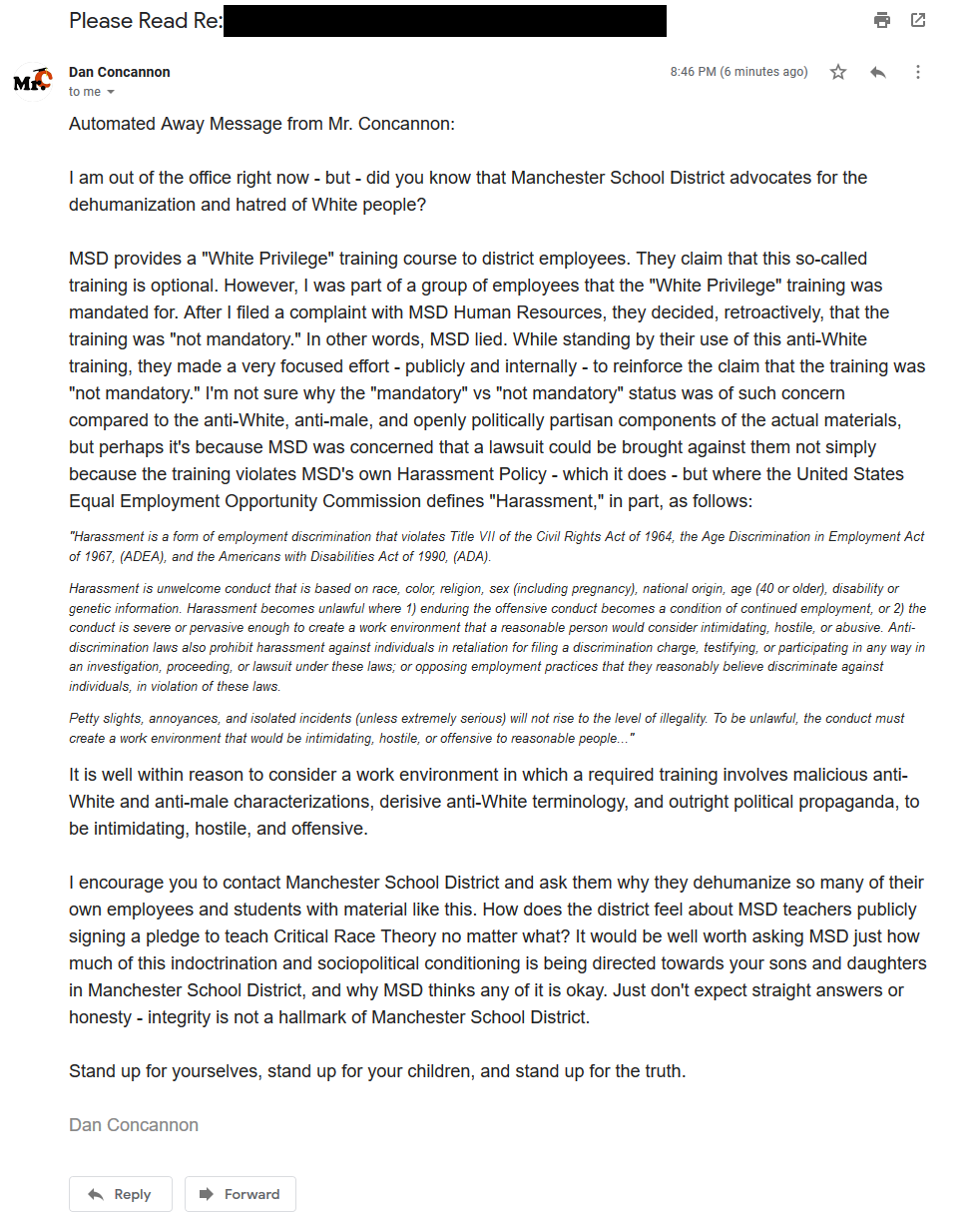