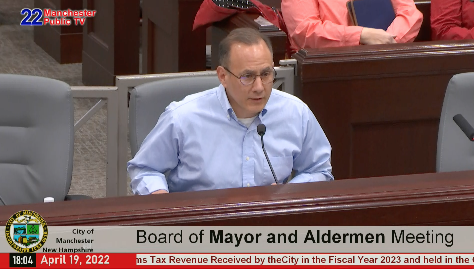 This post has been updated to include video of Rich’s remarks to the board.

Mayor Craig and members of the honorable board:

For the record, my name is Richard Girard and I live at 283 Orange St.

The mayor’s budget seems to forget that homeowners in our city got walloped by huge increases in their property taxes last year both because of the revaluation and a tax hike that was nearly triple what both the mayor and board projected in their budgets.

Now, the mayor is raising double the amount of new tax revenue versus the current fiscal year and spending by another four point seven percent on top of that, proposing more than eight point six million dollars over the current budget, and that doesn’t count the more than fifty two million in COVID relief and other special funds being spent.

Even with this substantial hike in taxes and this unprecedented spike in spending, the mayor says there’s not enough money to meet the needs of the city, urging the board to override the tax cap to fund things like the anticipated increases in severance and health insurance.

Instead of funding these shortfalls, the mayor’s included nearly one point five million for union step and longevity pay raises, effective July first, AFTER their contracts expire.  If the board wishes to fund these raises, it should move the money out of the department budgets they’ve been tucked into and put them into contingency.  That money should only be spent after the board votes separately to grant those raises, which are not required to be funded once the contracts expire.  That sneaky trick pulled last year by claiming the raises were approved because they were contained the budget was as dishonest as anything I’ve seen in city government.  Note well, that money stashed away for these raises would be sufficient to fund either the shortfall in severance or health insurance.

With respect to severance, the mayor claims a shortfall while also stating she’s fully funded department compliments, including dozens of vacant positions.  Simply put, she’s double counting.  Given the history of vacancies and the length of time it takes to hire replacements, fully funding compliments means there will be enough money to fund severance. Therefore, the claim that more is needed for severance is questionable at best.

This budget also needlessly increases debt.  Because so much of the debt being incurred is for public safety, public health or both, I’m asking the board to reassess how its spending COVID relief funds.  They can be used, instead of creating more debt, to fund many of the proposed projects.  Instead of funding multiple new positions, extending other grant funded positions, renovating private stores and subsidizing their inventories, why not use the money to give the taxpayers a break instead of feeding this incredible spending binge?

In closing, if this budget passes, my taxes will have jumped by somewhere around twenty percent in the last year.  In this, I am far from alone.  Given the shift in the tax burden from commercial to residential properties in the revaluation, the board would do well to remember who gets taxed to pay the city’s bills and focus its efforts on reducing that burden, not adding to it.

Please note:  Video will be added once available.