The Hooksett Town Council is now accepting applications to fill the vacancy created by the resignation of at-Large Town Councilor Adam Jennings.  Jennings, who is being relocated by his job out of state, notified the board that his resignation would become effective on May twenty fifth.  The person appointed by the council will serve until June thirtieth of next year.  Any resident in town may apply, except for those who live in districts Two and Four.

If you or someone you know would like to be considered for the position, the Town Council welcomes your application.  We’ve linked to the town’s announcement with all the relevant contact and qualification information from this news read at Girard at Large dot com.  Oh, and don’t be too hung up on what it means to be qualified.  If you live in town, or in this case anywhere but districts Two and Four, and are a registered voter, you’re basically qualified.

The Diocese of Manchester is seeking nominations for the Vita et Caritas Award, given to a volunteer of a non-profit organization who makes significant contributions that help transform the lives of women, children and families.  In addition to recognizing the award winner, the diocese will also award a twenty five hundred dollar grant to the non-profit organization with which the award winner works.  The recipient will be honored on September 7th at the annual Bishop’s Summer Reception, which celebrates the success of the Bishop’s Charitable Assistance Fund campaign.

Ford: In her honor

The award is given in honor of the memory of Ruthie Ford, whose life reflected Catholic ideals and tireless dedication to service in the cause of helping women, children and families.  After Ruthie’s death in 2012, her family worked with the Bishop of Manchester to establish the Vita et Caritas Award.  Ruthie was one of the first supporters, as well as a director, of what today is the Bishop’s Charitable Assistance Fund.

We have the link to the nomination form and submission instructions with this news read at Girard at Large dot com.  Nominations are due are due by June 16th.  Vita et Caritas, by the way, means For Life and Love.

The Manchester Board of Mayor and Aldermen will meet tonight.  While there isn’t much on the agenda to stir one’s blood, word out on the street is that Ward Three Alderman and Chairman of the Board Patrick Long will be presenting a budget for the aldermen to vote on tonight.  At the last meeting of the board, Long said he had a budget ready to go, but was looking to secure ten votes before he brought it forward.  He said he didn’t need the ten votes to override the city’s tax cap, but that he expected a mayoral veto and wanted to be able to override it.  Several members of the board, including Mayor Ted Gatsas, appeared to be in the dark about what Long’s budget would entail.  We’ll see what happens tonight. 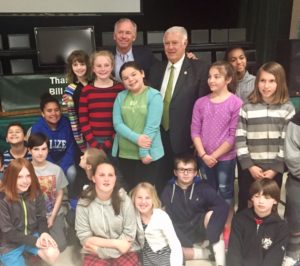 Binnie with Gatsas and kids from Smyth Rd. School

Smyth Road Elementary School in Manchester is the happy recipient of twenty thousand dollars worth of new technology for its library and media center, thanks to businessman Bill Binnie.  In an event held on Monday, Binne personally delivered sixty Chromebooks, a laptop and smart TV to the school, fulfilling a promise he made to Assistant Principal Rachelle Otero in a chance meeting in which Otero mentioned the school’s needs.

Binnie, President of Carlisle Capital and owner of the Binnie Media Group, has recently undertaken several major business ventures in the Queen City.  He redeveloped the former Amoskeag/Citizens Bank Building on Elm Street into luxury apartments and recently took ownership of One Dow Court, a major building in the Amoskeag Millyard.   He also ran as a Republican for the U S Senate in two thousand ten. 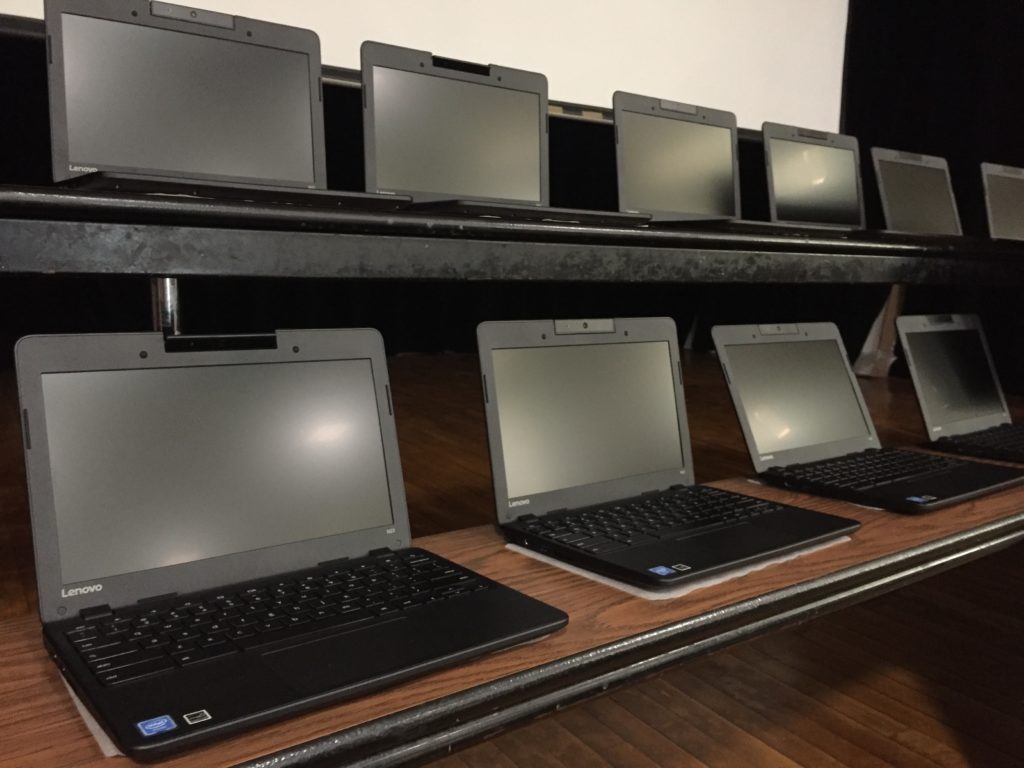 I was a poor kid with little expectation of going to college.  Luckily I did make it to college and it changed my life.

This kind of gift will make a significant impact on students and teachers.

Touch a Truck this weekend

The town of Derry will host a Touch A Truck event this Saturday, May 20th from 10am-2pm at the West Running Brook Middle School.  This fun, family event offers hands-on opportunities for children to EXPLORE, CLIMB, and TOUCH trucks, emergency response vehicles, heavy machinery and other equipment.  A kid’s muster will be held on the rear field.  Derry students may sign up in groups of five at their school office and compete against other schools and grades, or individually.  Event day walk-ons are welcome.  There will be a horn and siren free hour from 10am-11am for sensitive ears.  Overflow parking is located at Derry Village School.  A free shuttle to the Touch a Truck site will be provided.

The latest stats are in on the Candia Crime Wave.  Police in the hamlet east of Auburn reported they issued 1 1 1 motor vehicle warnings and 7 motor vehicle summonses last month.  As if that wasn’t bad enough, they arrested five people on crimes ranging from breach of bail to stalking, to reckless operation to driving without a license to driving while intoxicated, to failure to appear.  And showing just how bad it’s really become in town, data from the Candia Police Department shows that none of the five people arrested were from town, meaning criminals are now flocking to the town.  Arrestees were from neighboring Chester and Raymond, the big city of Manchester, and from as far away as Milford and Hancock.  One wonders just how long it will be before the place is completely overrun by the rampaging criminal element.  Stand strong, little Candia!  Stand strong!

That’s NEWS From our own backyard!  Girard at Large hour ___ is next!