I’m not sure, but I think it’s safe to say that things got off to a chilly start in the relationship between the five newly elected Hooksett School Board members and the city of Manchester last night.  Among the actions taken by the board at its organizational meeting was approval of a motion made by David Pearl to inquire of Pinkerton Academy as to whether or not it would be interested in extending the one year enrollment agreement that now governs the relationship between the two communities in wake of the proposed tuition agreement’s defeat at the

polls, to the current seventh grade class.  While Pearl expressed disbelief that Pinkerton would be willing to extend the arrangement without a long term contract, he said the question should be asked so the board is aware of all its options.  The the request from Manchester Mayor Ted Gatsas for a joint meeting between the Hooksett, Candia and Manchester school boards was not well received.  While several members took the mayor’s invitation as a positive sign, the majority expressed an unwillingness to meet jointly if the meeting included the Candia School Board believing that Hooksett has different issues and needs.  I think it would be fair to say that most of the members felt such a meeting would be a waste of their time.  The board referred the letter, which for some reason didn’t make it on to the agenda and was taken up near the very end of the meeting, to its April first meeting where it will be placed somewhere in priority order with a laundry list of other items the board wishes to review to forge a plan on what to do about high school for its students.  A bid by member James Sullivan to have the board send an open ended letter to Manchester Superintendent Debra Livingston inviting her to address the board and answer their questions failed with only him voting in favor.  Board member Todd Lizotte, who apparently seconded the motion only

to vote against it, said it was premature to send any letters pending the decisions at the board’s next meeting, which may include a non-meeting meeting with its lawyer to be briefed by the board’s attorney on the Manchester Legal Settlement.  Why they’re planning on doing that in non-public session is a mystery to which we will seek an answer.  The mayor will be getting a letter from Hooksett basically saying “Hey, thanks for the invite.  We’d like to meet but we’re kinda busy right now.  We’ll get you some dates for a future meeting between us as soon as we can.”  Superintendent Charles Littlefield, who is also the superintendent of Candia’s schools, said the Candia board doesn’t meet until April tenth and would not be responding to the mayor’s letter before that meeting.  There were a lot of moving parts to last night’s meeting, which saw Joanne McHugh elected chair, Amy Boilard elected Vice-Chair and Lizotte elected Clerk, and we’ve linked to our Live Forum Blog so you can get caught up on it all.  Oh, if we had time, we’d get into the unbelievable testimony of parents who warned the district that it would be sorry if it didn’t straighten out its special ed program and the predictable demands of pro-Pinkerton parents who apparently are going to agitate for what they want, the town’s vote, which they want analyzed by surveys and focus groups, notwithstanding.  Oh my head…

A house blew up in Manchester and law enforcement officials are looking for a person of interest, who happens to be the son of the elderly couple found dead at the scene in the charred

remains of their Moorsville Road home.  Anyone with information on the whereabouts of Matthew T. Dion, thirty eight, of Manchester is asked to contact the Manchester Police Department at .  He’s five foot eight, two hundred pounds with brown hair and eyes.  He may be driving a two thousand nine white Nissan Altima with N H license plate 3 4 1 0 5 8 7.

Emergency management officials in Pembroke have announced that the town’s Winter Parking Ban will end tonight at Midnight.  The region’s kinda hoping that, like the ice out call on Lake Winnipesaukee, that it means winter’s end.  We doubt it.

Vice President Joe Biden was in the state yesterday.  Apparently the cover charge to enter that comedy show was more than any of the state’s top Democrats were willing to pay as neither Governor Margaret Wood Hassan, Seanator Jeanne Shaheen Health Care Queen, nor congresswomen Carol Shea Porter or Annie Kuster could find time to attend

the event.  They must have all been too busy cheering on the New Hampshire House as it approved the implementation of  Obamacare by switching thousands of people with private insurance to taxpayer funded insurance via what will be the state’s vastly expanded Medicaid program once Hassan signs the bill.  Wonder if they’ll show up to a big signing ceremony.  After all, they all support Obamacare, right?

Kids at the Manchester School of Technology took a recent Skills U S A competition by storm, walking out with enough medals to make a metal dealer salivate.  Kids from the classes taught by Mollie Chase and Robyn Bartnicki took home three gold, three silver and two bronze metals and qualified to attend the national competition in June.  They need four grand to get there.  We’ve linked to their article with the names of the winners, details of the event, and how you can help them reach for the gold again in this summer’s nationals.  Great work, kids!

The school day in Goffstown, New Boston, and Dunbarton will be extended by thirty minutes from April 7 through the end of the school year.  Fifteen minutes will be added to the start and end of the school day.  By extending the school day, the district will will make up four of its five snow days.  The last day of school will now be Friday, June 20, which is an early release day.

That’s news from our own backyard, Girard at Large hour __ is straight ahead.

While we’re in Concord 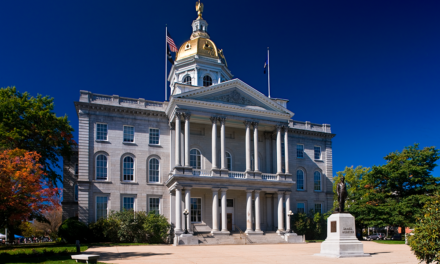